The Nvidia Shield joined the likes of the Ouya, GameStick and Mad Catz MOJO at the forefront of the Android micro-console revolution.

But, like its compatriots, it failed to make a lasting commercial impact and certainly did little to trouble the likes of Sony, Microsoft and Nintendo.

However, it was a fine showcase of Nvidia's Tegra 4 chipset and was clearly viewed by the company as a worthwhile venture, as it has been succeeded in 2014 by another Shield product - albeit one which takes on a totally different form factor.

As you might have guessed from the name, this sequel is a tablet device rather than a clamshell handheld, but the objective remains the same - to create the ultimate gaming platform for Android players. It packs Nvidia's latest technology - the Tegra K1 - and ships alongside its own console-quality wireless controller.

The new design means this hopefully won't get left on the shelf by prospective tablet shoppers, but does it also mean that hardcore gamers will turn up their noses and look elsewhere?

The Shield Tablet really couldn't be any more different from its forerunner, at least in purely physical terms. While last year's effort looked like an Xbox 360 controller with an LCD screen crudely attached, the Shield Tablet is as its name suggests; it's a slate-like device with an 8-inch screen.

The front is home to an 8-inch 1920x1200 resolution screen and two impressively powerful speakers, while the back of the device is matt plastic, with a glossy "Shield" logo in the middle. It's an unassuming product which isn't sexy enough to induce envious drooling from passers-by, but it can hardly be described as ugly.

The usual array of buttons and inputs can be found on the side edge of the Shield Tablet, and there's a slot for a MicroSD card - a handy feature if you're looking to download plenty of games. A Mini-HDMI port is included - just as it was on the original Shield - because connecting this device to your television is something you'll almost certainly want to do. You'll have to fork out your own cash for a cable however, as one isn't included in the box.

You'll also spot two vents at the top and bottom edge of the tablet - the reason for them being there becomes apparent when you load up one of the more demanding 3D Android games. The Tegra K1 chipset is cutting edge, and as a result can run very hot indeed. Ventilation was clearly a key consideration when Nvidia was designing the case for the Shield Tablet.

There's also a stylus docked onto the side of the device which can be used with the preinstalled art package, but is rather limited in usefulness outside of this activity.

The Shield Wireless Controller is sold separately to the tablet, but it's an absolutely essential purchase if you're serious about making sure this device reaches its full potential. The build quality is second to none, and the button arrangement and design are nigh-on perfect. The drawback is that it only works with the Shield range, due to the fact that it uses WiFi Direct rather than Bluetooth for its connectivity. 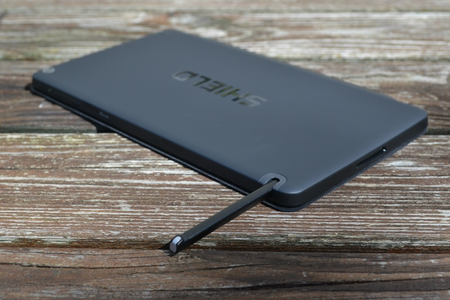 While other Android tablets and phones offer gaming as something of a bonus feature, the Nvidia Shield Tablet has been constructed with interactive entertainment as its modus operandi - it even says so on the packaging. It's quite a bold claim to say this is the "ultimate tablet for gamers", but Nvidia has at least backed this up by imbuing the device with some incredible graphical performance.

The Shield Tablet comes pre-loaded with an Android port of Trine 2, which at the time of writing is totally exclusive to this device. Amazingly, it has lost none of the graphical brilliance which was witnessed in its Xbox 360, PS3 and Wii U incarnations; it's just as gorgeous on this thin and lightweight product as it was on systems much larger and bulkier.

Load up the Nvidia-exclusive Android conversions of Half Life 2 and Portal and the story is very much the same, illustrating that this is a slate with gaming very much at the forefront.

The problem is that aside from these titles and few others of note, there's precious little available on Android right now which truly pushes the Shield Tablet to its limits. Sure, it runs everything you throw at it without breaking a sweat, but some Android games remain jerky and unoptimised - something that even the most powerful hardware in the world can't solve.

Many games are simply standard Android releases with physical input added-on as an afterthought, and won't trouble the best games available on the 3DS or PS Vita.

Away from games, the Shield Tablet offers an excellent overall experience - so long as you avoid using the power-saving mode which it defaults to when you switch it on for the first time. This throttles performance to conserve battery life, and led to some horrendously patchy performance during our review period.

Nvidia has employed an almost stock version of Android 4.4 on the Shield Tablet, which means you don't have to endure any gimmicks or poorly-designed menus - this is very much Google's vision of its OS. However, there's is some bloatware - you can't delete any of the pre-loaded apps or games, and when you consider that Trine 2 takes up well over a gigabyte of space, that's slightly annoying.

The Shield Tablet's front-facing camera is perfect for apps like Skype and Snapchat, but the rear-facing 5 megapixel snapper produces very poor quality images. There's no LED flash to shoot indoors, and snaps tend to look fuzzy or washed-out. Nvidia has also used a custom camera application which isn't as intuitive as the one which ships with stock Android.

Most people are wise enough to know that a tablet device isn't really a great way to take photos, but if you're one of those misguided few which still insist on brandishing your slate at family parties, then you might want to look elsewhere - this isn't going to fit the bill.

Nvidia is very serious about making its Shield range the gamer's choice when it comes to Android devices, and has done a lot of things right with this tablet. The Nvidia Hub application is where much of this intent manifests itself; it showcases a curated selection of games as well as allowing you to link the tablet to a compatible PC so that you can stream games anywhere in the house.

Unlike Ouya and GameStick, which have their own download ecosystems, the Shield Tablet falls back on the Google Play market. While the Nvidia Hub appears to offer a separate market, when you actually go to purchase and download a game, it pushes you to Google's digital storefront.

Not only does this keep things tidy and avoid replication of content - you don't have to buy a game you already own on Android - it means you're not expected to input another set of credit card details. In short, it's the right approach, and Nvidia should be commended for it.

The company also deserves a pat on the back for coming up with some truly amazing hardware. The Tegra K1 chip is a beast, and offers the same kind of performance we're accustomed to seeing on dedicated home consoles. When paired with that exquisite controller, this really does become a system to be feared - something which could not be said for some of the much-hyped Android micro-consoles we've seen over the past year or so. 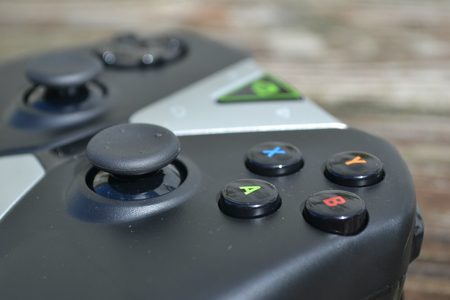 While Nvidia has done a great job of refreshing the Shield hardware to ensure it remains at the bleeding edge of the Android market, the change of form factor is likely to annoy some fans. Sure, the original Shield hardly set tills alight, but those who purchased it found it to be a formidable portable device capable of hosting some amazing gaming experiences.

While the Shield Tablet remains portable, it's not quite the same thing - you need to rest it on a flat surface to use the wireless controller, and if you're carrying around both then there's a lot more bulk to consider here. The move towards a tablet-style design is clearly a concession to those people who want a console and a product they can surf the web on, but that concession could lose the Shield Tablet its core market.

Not including the Shield controller in the box was also a misstep, and one which could have serious consequences for the commercial success of the Shield Tablet. Without the controller, this is just a slate - one with amazing specs, granted, but it's still just a slate. The controller is what sets it apart, and it should have been bundled from the start.

Ar £50 a pop, it's also a little too costly for our liking, which is a shame as four can be connected at once, opening up tantalising multiplayer possibilities.

Like the Shield before it, the Shield Tablet certainly isn't lacking when it comes to polygon-pushing power.

The Tegra K1 chipset is a true beast and is sure to push Android mobile tech forward in exciting new ways this year. It's also hard to fault Nvidia's approach to gaming, which includes a cleverly-designed "hub" for players, an excellent wireless controller and brilliant PC streaming capabilities.

Unlike the original Shield, this tablet is useful even when you're not gaming, as it doubles as an effective slate which is great for movies, surfing and other activities.

However, there are big question marks over the Shield Tablet's long-term future as a gaming system. There are precious few exclusive games at present, and that isn't likely to change any time soon; if you're looking to pick one up, expect to be playing standard Android titles with physical controls tacked-on. Additionally, Nvidia really should have bundled the Shield Wireless Controller with the tablet from the outset.

Negatives taken into account, there's no denying that the Shield Tablet is an excellent device. It's fast, capable, runs (largely) stock Android and costs just a little more than a Nexus 7. Serious gamers will definitely want to consider this before making a tablet purchase, but it remains to be seen if the mainstream market will be as keen.

Thanks to Ebuyer for supplying the Nvidia Shield Tablet, Shield Tablet Cover and Shield Wireless Controller used in this review.

The Shield Tablet provides incredible gaming power at a reasonable cost, but a lack of exclusive software and no bundled controller count against it
By Damien McFerran
| Aug 28, 2014 |
Android