Continue the family tradition of being killed by skeletons

The game drops you into a maze-like fortress, filled with traps and monsters. You'll try to explore the different areas, hunt down the four mini-bosses, and take on the final baddy. But you'll probably die in about four minutes.

Not to worry, though, as your kids inherit your stats, abilities, weapons, and armour, and one of them can pick up where you left off. As you churn through the generations, your family gets a little closer to clearing the castle. 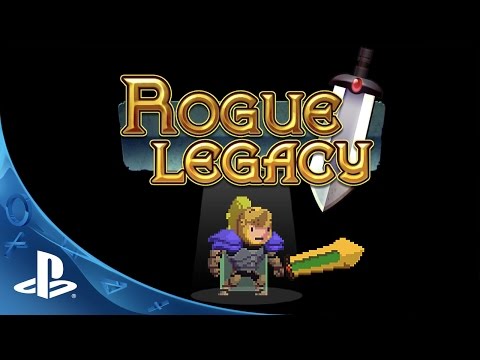 You'll also have to deal with genetic mutations. Your son might be colourblind and see the world in monochrome. Your daughter might have IBS and farts whenever she jumps. Another son might have Alzheimer's, which disables the map.

In our review, we said that each run is "frantic, slapstick, unpredictable, and unbelievably good fun," but warned that the inconsequential progress made in each attempt can turn Rogue Legacy into a "tedious war of grind and attrition."

This PS Vita edition is cross-buy, which means you'll also get the PS3 and PS4 versions as part of the price tag. And it's cross-save, so your progress carries over between systems.