The thing I like best about Mario Golf: World Tour is the way it so expertly balances its playful arcade buffoonery with more grounded golf realism.

In some modes it's a game of ghosts thwacking missile-powered balls on an underwater golf course, and in others it's a sharp sim that takes the sport seriously and leaves the novelty items at the clubhouse.

Even in the mechanics itself, there's a sharp blend of bouncy ball-whacking fun and more tactical play. You've got the twitchy rhythm-driven fun of acing the three-button stroke system, but it's backed up with fathoms of tactical depth.

Do you use a topspin or backspin? Do you apply fade, draw, chip, or pitch? How will you cope with wind or hazards or lumpy terrain? How will you escape from a sandy bunker?

Do you dip into your limited supply of power shots, or - in certain modes - use one of your special items? What club will you use? Will you take a risky shortcut over a lake, or play it safe? 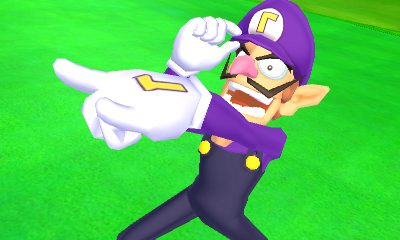 The two sides of the coin are tuned with pinpoint precision, by a developer that has spent the last 17 years making golf games, to create a cracking sports sim that's satisfying, strategic, and lots of fun.

The golf feels good, then. But it's in the ways you can actually play it that World Tour can fall down.

Take the Castle Club. It might look like something out of Mario Golf: Advance Tour, but it shares none of that game's RPG progression. In reality, it's just a convoluted walkabout menu system with no easy way to determine what you have and haven't achieved.

This mode is also bracingly short, with only three courses to play on and three trophies to chase. It's satisfying to beat the lot, but the whole mode is over before it even begins - with only a few bonus bits and bobs to find after you're done.

Thankfully, the other modes are much better. Like the comprehensive single-player quick rounds, or the fantastic puzzle-like challenges, which task you with collecting coins, shooting through rings, or playing against the clock.

While the main Castle Club campaign has no items and features more realistic courses, the other modes lets you play on outrageous courses (including a bouncy patchwork quilt and an undergrowth with giant baddies) and use wacky items. 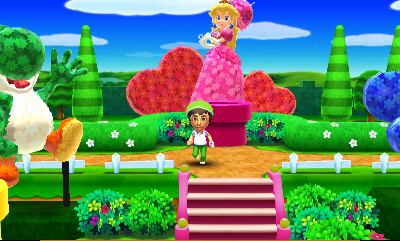 Mario Golf: World Tour has also got a fully fledged online mode with loads of ways to play, but the execution is far from perfect.

These tournaments run over the course of several days, and might involve racking up points, collecting coins, or going all Happy Gilmore and competing for the longest drive.

There's a carousel of open tournaments on the main screen, but some are hidden in the basement of the Castle Club and you might never find them without exploring.

And although you're told what date and time the scores will be tallied up, your only reminder is a blue dot on the game's icon, and you have to dive into sub-menus or return to that basement to find out if you won (in a cute award ceremony).

If you don't fancy the official Nintendo tournaments you can host your own with different rules, courses, and limitations, and open them to the world or share them with pals or Twitter followers or your sewing club by using a password. 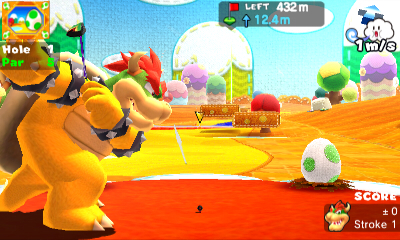 Yoshi's Lake is knitted, sewn, doodled, and coloured in with crayons

You can also play a simple round of real-time golf with a friend or stranger.

Offline multiplayer is a little less impressive. It's full of options and works perfectly, but you can't do pass-and-play and, unlike Mario Tennis Open, it doesn't support download play so all players will need a copy of the game.

When it comes to the golf itself, Mario Golf: World Tour is the best in the series. It feels amazing, there's an enormous amount of depth to the mechanics, and it looks terrific.

But the short single-player campaign is disappointing, and while the online multiplayer is one of Nintendo's strongest attempts at social yet, the execution pales in comparison to turn-taking and appointment games on iOS.

This is a tremendous golf game with a smart balance between realism and zaniness. But a short campaign and spotty online play can let it down
By Mark Brown
| Apr 29, 2014 |
3DS
Find out more about Mario Golf: World Tour

Mario Golf: World Tour guide - How to unlock all the secret characters and courses

Nintendo unveils not 1, not 2, but 3 DLC packs for Mario Golf: World Tour on 3DS