This time, Android gamers will get to blow up the world, choose their own adventure, and waste several weeks matching up tiles.

Threes! can have such a strong grasp on the human psyche that you'll swear it was brewed in a lab for maximum addictiveness. Like methamphetamine... only a bit less destructive to your life.

The goal here is simple: you shunt numbered tiles around a cramped grid and force identical tiles together to forge bigger numbers and boost your high score.

There's just something impossibly satisfying about being able to slam together two titanic '384' tiles to create a monster '768' tile. And not just because you can boast about it on Twitter.

Given Threes! combines simple but compulsive game design with a charming indie aesthetic, you'll soon see why we called it "a dashing, intelligent, and deceptively simple treat" in our Gold Award review of it. 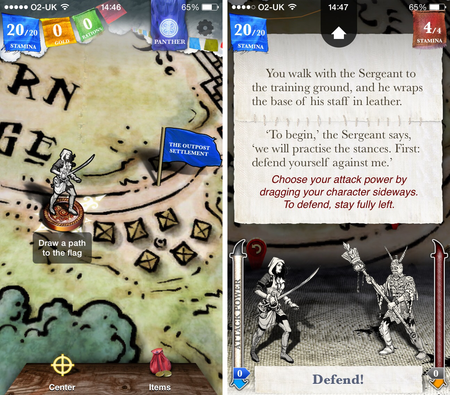 Sorcery! is proud of its heritage as a series of Steve Jackson paperbacks. So much so that the characters are just flimsy black-and-white doodles, seemingly cut out of the 1980s gamebooks.

But it's also free from the shackles of the past. Instead of turning pages, you see, you move about with a map screen. And instead of rolling dice, you slide your character from left to right to crank up the velocity of your next attack.

The best of both worlds, then.

Back in 2013, review man Chris said of the iOS edition: "A thrilling combination of fantasy novel and RPG, Sorcery! offers a wonderfully fresh take on interactive fiction."

Nuclear war shouldn't be fun. And hitting London with an ICBM and seeing that you just annihilated some 85 million people does leave you with a nasty feeling in the pit of your stomach.

But there's a perverse joy here in swapping nukes with North Korea, using this space rock we call earth as a chessboard, and shrugging off billions of casualties as collateral damage.

It's a streamlined mobile-friendly strategy game with a slick Google Earth-style interface where you race to build a stack of weapons, expand your territory, research new weapons, and ultimately wipe out the world's rival superpowers.

Best of all - a quarter of the game's profits will go towards organisations that are reducing the world's nuclear arsenal. That should help you sleep a little easier tonight.

Kickstart this: Kodama is a gorgeous-looking platforming physics-puzzler full of Japanese mythology