Out at midnight: Gun down the bad guys in AntiSquad for iPad and iPhone

AntiSquad is a turn-based strategy title in which you take on the worst-of-the-worst in some of the most unpleasant places on earth.

And it's out in New Zealand right now, which means it should be hitting the UK and US App Stores at midnight.

Taking part in skirmishes rather than large-scale battles here, you lead the titular team through a Final Fantasy Tactics-meets-Breaking Bad-via-Borderlands-style experience.

In other words, you're gunning down cartoony drug runners in grid-based scraps. 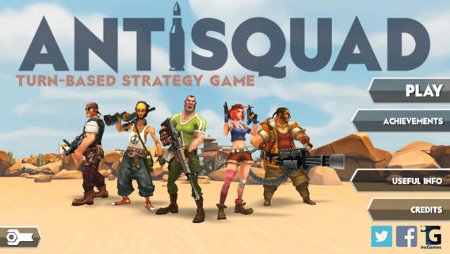 There's a huge range of unlockable weapons and character specialisations, and a decently sized single-player campaign (with a story that's probably about shooting, bad jokes, and the fact that drugs are evil).

There are loads of challenges to complete and achievements to unlock, too. Plus, the whole thing is pretty darn impressive visually.

AntiSquad should be available at midnight in the UK and US, and will set you back £1.99 / $2.99. It looks like there'll be some IAPs available, although we're not quite sure how these will affect the gameplay.