It's impossible to experience Joe Dever's Lone Wolf without thinking of Skyrim.

You play as a solitary hero, the last of a powerful race, adventuring through snow-covered lands in a quest to right the wrongs of the world with naught but your weapons and magical skills to keep you company.

But prolific Gamebook author Joe Dever crafted this world long before Skyrim - or even The Elder Scrolls - were a thing, and Lone Wolf is a beautiful, immersive game that will appeal to any gamer with a deep love of narrative of adventure.

Like most gamebooks, Joe Dever's Lone Wolf requires a good bit of reading and a long attention span to fully appreciate it.

The text isn't static, however, and you're given plenty of choices on how to influence the direction and approach of the narrative.

Are you the type to charge in first and ask questions later, or would you prefer to sit back and analyse a situation to see how it unfolds? Whichever is closer to your playing style, Lone Wolf has you covered as each encounter has multiple possible solutions.

Better still, you're not locked into one track once you select it.

I chose to play an analytical character with skills like camouflage and animal lore, but when I came across a young girl in distress I ran in to save her without thinking twice about it. 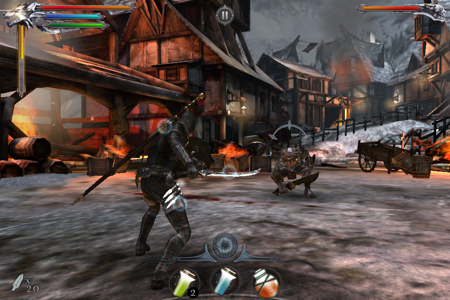 This level of player agency can't be praised enough, as I never felt like Lone Wolf was dragging my character in a direction I didn't want him to go. Sure, the story and its plot points are all relatively fixed, but I had the ultimate freedom in how I got to them.

And the journey was always a pleasant one, as each passage of text is accompanied by a rather evocative piece of ambient background music. These tracks are never distracting enough to pull your focus off the words, yet they all help draw you deeper into the story.

Which made the transition to combat sequences all the more exciting.

Unlike many other gamebooks, Lone Wolf features turn-based combat sequences rendered in full 3D that rely heavily on Quick Time Events to determine how battles will play out.

There's no simulated die-rolling here - and each fight feels like a little slice of Infinity Blade wrapped up for your gaming pleasure.

Almost every move, from a heavy slice to a shield bash, has the option to click and drag in the right direction to add injury to injury, and a moment's inattention during combat can easily cost you a battle. 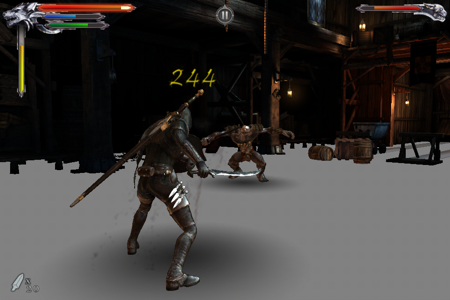 Like the prose of the text itself, this helps cement your focus to Lone Wolf and breaks up the tedium of tap-to-fight combat nicely.

Kai Arts - special abilities which you choose at the outset of your adventure - can be used in combat to varying degrees, and some allow you to use the environment around the battle to your advantage.

These skills open up a host of opportunities for clever players, and can make even routine battles feel exciting and rewarding once you clear them.

Lone Wolf isn't a game you fire up while waiting in line at Starbucks. To get the most out of it, you need to treat it like a console game or a proper book - clear out an hour or so of your time, maybe grab a glass of wine, and allow yourself to fall into the story.

The experience that you'll get in return will be well worth the investment.