There are three things you need to enjoy your time with Valhalla Knights 3: a copy of the game, a love of MMORPGs, and a hefty dose of cultural relativism.

For those unfamiliar with the last term - it means that you can't, or at least shouldn't, judge one culture through the prism of another.

The temptation to do so comes up frequently in Valhalla Knights 3, where you can hire hostesses and engage in "Sexy Time" with them. While this might seem odd to western gamers, it's a nod to the hostess culture in Japan with a hefty, heaping, heaving dose of fan service tossed in for good measure.

Can you enjoy this RPG without venturing into the red light district? Absolutely, but this area presents a unique, if tacky, cultural experience that helps Valhalla Knights 3 stand out.

At its core, Valhalla Knights 3 is an MMORPG without the whole massively multiplayer online aspect. Sure, there are online PvP matches, but you'll spend most of your time playing the single-player campaign.

The plot's a bit thin. It centres around a mute protagonist who's sent into a ruined-castle/penal-colony in search of a legendary treasure, which is buried deep beneath the tunnels of the blasted battlements. 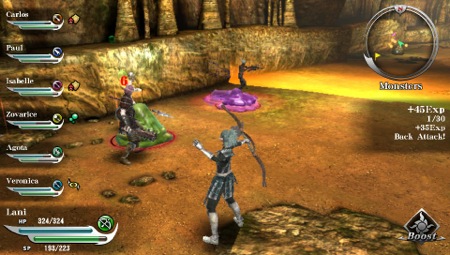 Most of the missions fall into the 'kill X number of monster Y in area Z' variety, but there are the odd gather/fetch quests tossed in for variety. If you're the type of player who spends hours grinding to top levels in MMOs, these quests will feel both familiar and fun in their own ways.

Battles become a bit intense once you get about three or four allies, but thankfully the simplified style of combat (press X for light attack, Y for power attack, with selectable abilities on D-pad) helps mitigate the chaos - as does the ability to set group formations in the menu screen.

Overall, the combat is challenging, entertaining, and fast-paced, and it provides a sizable sense of achievement once you overcome a tougher group of enemies.

Then there's the Sexy Time side of the coin.

If you choose to shop in the more expensive Light District at the top of the prison town, you'll need to hire hostesses ("clerks") before you can buy items from them.

If you buy enough from the clerk, or give her the correct gifts, you'll be prompted to go into a touchscreen-based Sexy Time simulation, where you fondle, caress, and kiss her from top to bottom.

Should you do well in Sexy Time, your relationship with the clerk will improve and - should you max it - you'll be able to recruit her to your clan, fetishistic outfit, "Bunny Girl" class, and all. Y'know, after the two of you spend an off-screen night in a love hotel.

Interestingly, the clerks - all female - don't discriminate based on your character's gender, although the dialogue does change a bit. 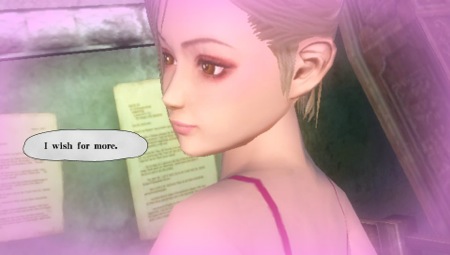 Unfortunately, while you can avoid the Light District and hostess culture by shopping in the Lower Slums, you can't avoid the blatant objectification of women in Valhalla Knights 3.

During the opening cinematic, a female member of your band is carried off by two male toughs who promise to, "make good use of her assets". Later, you run into this girl happily working as a hostess - essentially a paid, female escort - completely unfazed by the fact that she's just been sold into sex slavery. In fact, she claims to be happy with the arrangement.

The lack of male clerks for you to fondle should remove any doubt that this game is aimed squarely at heterosexual male gamers with juvenile tastes or, perhaps, open-minded lesbians who aren't turned off by the idea of elves and halflings being sold into sex slavery.

While the long and frequent load times are not fun to endure, the most frustrating aspect of Valhalla Knights 3 is overall lack of touchscreen inputs and control customisations.

Five of the nine options in the System Configuration menu are related to the styles of panties hostess NPCs can wear, while control customisations are nowhere to be seen. If Marvelous AQL could integrate touch controls for Sexy Time, it feels amiss that they're not available in combat. 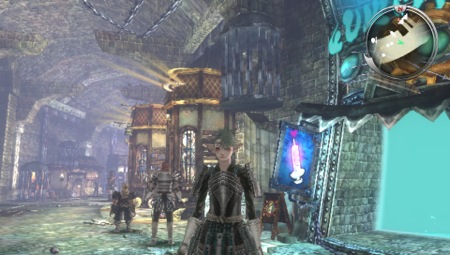 While I can understand, if not respect, the approach Valhalla Knights 3 takes toward its presentation of hostess culture, it's obvious that it would be a stronger and more fleshed out RPG experience if its developers had spent more time on refining its graphics and core mechanics, and less time on the brothel experience.

Still, if you're willing to be patient with Valhalla Knights 3 and overlook its occasional stutters and habitual mishandling of female characters, it's a compelling RPG that offers a huge and rich world for players to lose themselves in.

Just don't play it in public.

A strong and compelling RPG hidden under mountains of fan service. Marvelous AQL should seriously reconsider bringing sexy back if there's a sequel
By Matthew Diener
| Oct 15, 2013 |
PS Vita
Find out more about Valhalla Knights 3