Yesterday, DmC: Devil May Cry developer Ninja Theory teased its fans with the cryptic tweet, "Tomorrow. Something new to show."

A new Heavenly Sword? A follow-up to Enslaved: Odyssey to the West? Nope. Ninja Theory's next game will be the free-to-play mobile brawler Fightback.

It's a side-scrolling action game, with an '80s action movie vibe and a touch-based combat system.

In the first screenshot of the game (posted below), the hero of the piece is kicking the crap out of some goon in a seedy Japanese love hotel. We can discern from the image that you'll rack up combos, do special moves (like "Skull Splitter"), and presumably be able to pull out a machine gun. 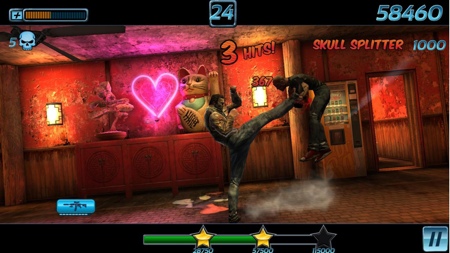 "Ninja Theory has always strived for the highest production values," product manager Dominic Matthews says, "and that absolutely remains the case in this exciting new space."

Chillingo will publish Fightback on iOS and Android in the summer. More details are expected before then, and the game will be playable at E3.