Capcom has tossed out some false testimony about Ace Attorney HD being delayed until July, and let the record state that this three-game collection will, in fact, be out on iOS next week.

This imminent app includes the first three games in the Nintendo DS franchise. That's Phoenix Wright, Justice for All, and Trials and Tribulations.

They all star rookie lawyer Phoenix Wright, who is assigned to a series of murder cases. He'll hunt through crime scenes for evidence, then head to court and try and get his client off the hook.

Bang for your buck

"I know that may seem high by iPhone standards," Capcom's senior community guy Chris Antista says, "but these games are huge."

"They contain hours and hours of expertly written entertainment, and they've had a lot more work put in to them than your average iOS slot game or bubble-popping simulator." 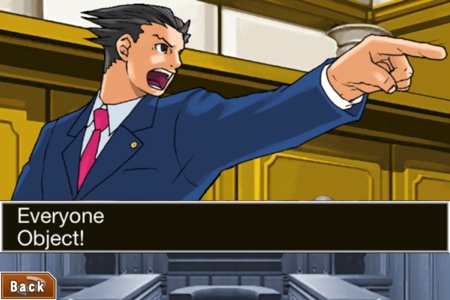 That work includes remastering and enhancing the games for Retina displays, and adding the "Everyone Object" mode which allows players to share dissatisfaction with everyday life. Objection! is the new FML, it seems.

Phoenix Wright: Ace Attorney Trilogy HD, to give it its full name, will stand trial on the App Store from May 30th. Don't worry: we'll remind you.

Oh, and despite the fact that this HD trilogy is also available on Android over in Japan, the English translation will be exclusive to iPhone and iPad.