Taking flight globally on May 9th

American developer duo Firaxis and 2K Games have confirmed that Sid Meier's Ace Patrol, which is already available to download from the Dutch App Store, will be released worldwide on May 9th.

As it name suggests, Sid Meier's Ace Patrol was conceived, designed, and even programmed by legendary developer Sid Meier, who's probably best known for his rather excellent Civilization franchise.

Anyway, Ace Patrol is a free-to-play turn-based air-combat title in which you pilot 30 vintage and historically accurate aircrafts from World War I through more than 120 action-packed missions. 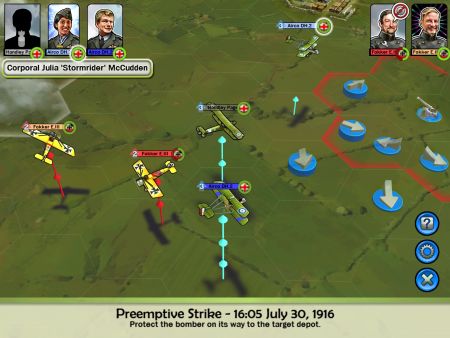 Along the way, you will earn rank promotions; gain access to equipment upgrades; and unlock pro manoeuvres like rolls, loops, and slips.

Ace Patrol isn't just a single-player game, mind. You can compete against your friends in two-player "hot-pad" matches, and take on other wannabe pilots in asynchronous multiplayer bouts through Game Center.

Interested? So you should be. You'll be able to download Ace Patrol for free from your local App Store on May 9th.

Great news! You can now play through Episode 4 - Death From Above of Blue Toad Murder Files

Real Football 2013, Asphalt 7, and 11 other Gameloft games will be optimised for the Galaxy S4