However, rather than just port Arma's traditional first-person shooter experience onto Nvidia's upcoming flip-screen 'unconsole', Bohemia Interactive is trying something a little different.

Arma Tactics is a real-time strategy game, you see, based around close-combat military encounters.

In it, you assume control of a four-man squad, and must complete objectives and eliminate opponents using your wily wits and dexterous thumbs. 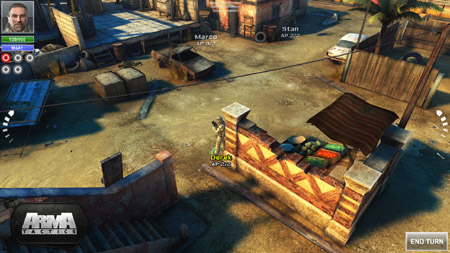 Unlike Arma II: Firing Range, which underwhelmed when it appeared on Tegra-equipped tablets back in 2011, Arma Tactics should boast some half-decent control mechanics, courtesy of Project Shield's dual-analogue stick configuration.

In truth, we're slightly surprised that the Arma team didn't take advantage of those twin sticks to deliver some of the franchise's trademark FPS gameplay on Nvidia's forthcoming Android console.

Still, when the detail-obsessed folk behind a franchise like Arma start referencing X-COM as an inspiration, you can be sure that RTS die-hards will sit up and pay attention.

Due to land during the first half of 2013, Arma Tactics will feature a structured single-player campaign, a variety of game modes, and generated missions with randomised objectives.

After debuting on Project Shield, it could "potentially" make its way to iOS and Android within a few months.