Birds on the wing

We've all been there - you're at the airport, waiting for your flight to depart, when it suddenly hits you: you've left your green pig pyjamas and Red Bird plushie back at home!

Luckily, if you happen to be flying out from Helsinki-Vantaa airport in the forseeable future, such worries are a thing of the past, thanks to the sudden appearance of an Angry Birds pop up store.

The store, a photo of which just materialised on the Angry Birds Facebook page, is located in Terminal 2 of the Finnish airport, and appears to contain all manner of avian-themed products.

Judging from the image (shown below), travellers can pick up toys, plushies, and t-shirts from the mobile outlet, all tailored to reflect their love of the world-famous feathered franchise.

Unsurprisingly, one side of the store's exterior is devoted to Angry Birds Space, which only yesterday received an extra 20 levels set on the food planet of Utopia.

If you're all stocked up on merch, and fancy spending some time with the actual game, you can get Angry Birds Space on iPhone [buy], iPad [buy], and Android [download] now. 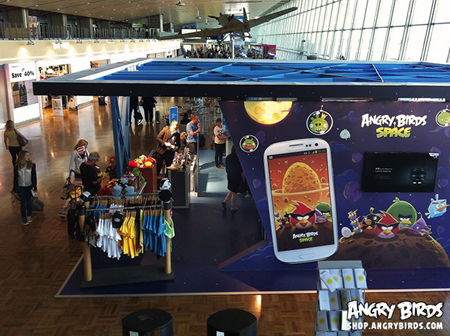 Ouya to get OnLive at launch