It's hard to imagine reviewing a dual-core phone with a 5-megapixel camera and HD video recording without treating it as a high-end phone.

But that's exactly what I'm doing with the Xperia U, the 'entry level' phone from the new range of 'NXT' Xperia smartphones announced at the start of 2012, which included the mid-range Xperia P and the flagship Xperia S.

If you want the latest generation of quad-core devices, like the HTC One X or Samsung's Galaxy S III, you'll probably pay out around £500 for either. The Xperia U will certainly help keep a few quid in your pocket.

While it's not a superslim handset, with straight lines the order of the day, but there's a subtle convex curve to its back to ensure it's not too boxy. One bonus of this is the ability to stand the phone upright or on its side. 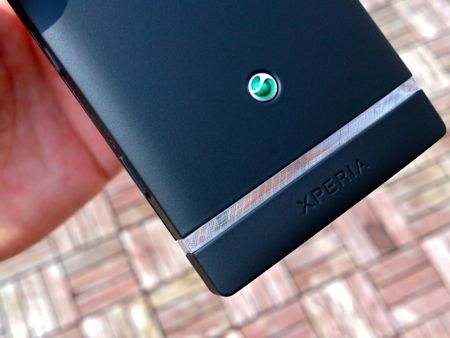 The transparent band is another feature the Xperia U shares with its higher-specified counterparts, with the keys for 'back', 'home', and 'menu' almost hidden above the band, marked out by three small dots beneath the screen.

Pressing with accuracy requires more of a swipe than a simple tap, but it's easy to get used to, and the interface makes it a lot harder to accidentally tap one of the keys when playing a game.

You can also change the illumination colour for the transparent band. Instead of the subtle white lighting on the Xperia S, you can select from a range of colours that includes a very loud yellow to bright pink.

Add to that the ability to change the base plastic from the standard black (a pink base is included in the box) and Sony has created a phone that's clearly aimed at the type of person who wants to show off. 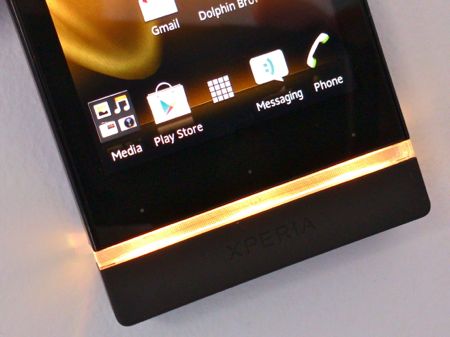 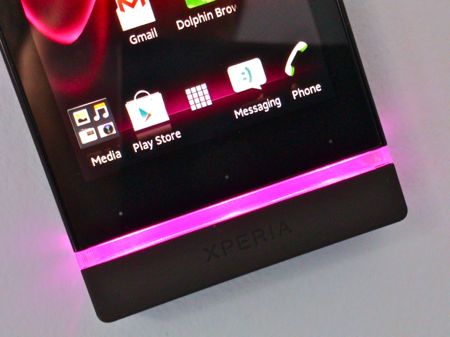 There's no menu option to turn off the rather bright illumination (linked to the screen brightness, so to turn down the lighting effect would require reducing screen visibility) and it's a bit of a gimmick.

If you choose to stick to white, the least in-your-face colour, you'll be able to forget about it until you run the native music player, which will change the colour according to the primary colour on your album art.

We suspect this feature will divide opinion. 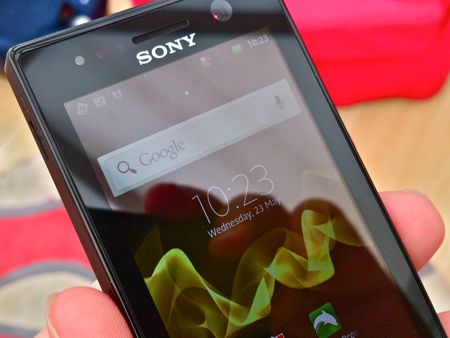 A 3.5-inch display seems rather small in the world of Android, even though Apple is still to expand beyond this size. With a 480x854-pixel display, the Xperia U manages an impressive 280 pixels-per-inch, and you'll struggle to make out the individual pixels.

With the decent brightness level that makes it usable outdoors as well as in, the screen is extremely impressive for the money. The Mobile BRAVIA Engine further enhances the contrast and saturation for picture and movie playback. 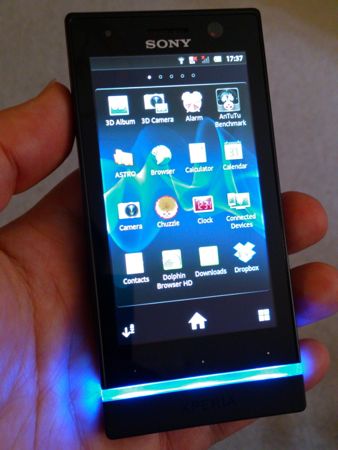 With a smaller screen comes the problem of entering text using the on-screen keyboard, and another limitation of the phone is the lack of an HDMI output to connect the phone to the big screen for a better gaming or multimedia experience.

However, the micro-USB port supports USB-On-The-Go, allowing you to connect USB devices - such as flash drives, keyboards, mice, or game controllers - to the phone. 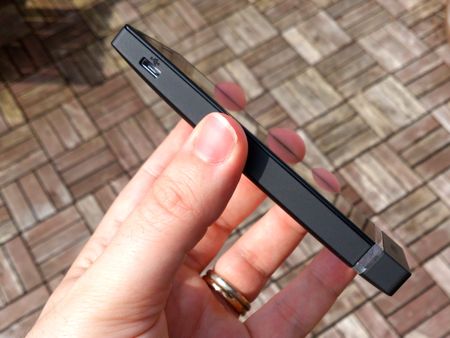 The 1GHz dual-core processor might not have been expected for a phone in this segment of the market, and it performs well. The Quadrant benchmark tool showed the Xperia U sitting only a tiny way behind Samsung's Galaxy Nexus, while the Antutu score of 5369 was almost up there with the HTC One S, powered by Qualcomm's latest S4 dual-core chipset.

What might restrict performance is the 512MB of RAM and the lack of Android 4 on the phone out of the box. What's more, the upgrade to Ice Cream Sandwich has been delayed. Of all the 2011 and 2012 models to get updated, this phone will probably get the update last.

There's not much wrong with Android 2.3, however. Most people won't be particularly bothered about the version of the OS when it doesn't really impact on the selection of apps and games you can enjoy - especially as the front-end launcher from Sony will be virtually unchanged.

The launcher is simple and fast, with the ability to view apps in your own order, by most recently installed, most used, or simply alphabetically. You can also create folders on the home screens by dragging an icon over another icon.

As with iPhone, you can also quickly uninstall apps from the menu, including some of the preinstalled apps that you might not want.

A 5-megapixel camera isn't bad - the megapixel war has pretty much fizzled out in the last couple of years, with 8-megapixels being generally regarded as the most people need.

Sony obviously went out on a limb with the Xperia S's 12-megapixel camera, but for sharing photos on Facebook or Twitpic, or simply showing pictures on the phone display, 5-megapixels is sufficient.

As long as you can get a good sharp photo without loads of noise then you should be happy. The Xperia U does this, with the camera interface having the same key features as the Xperia S, giving you ample control. 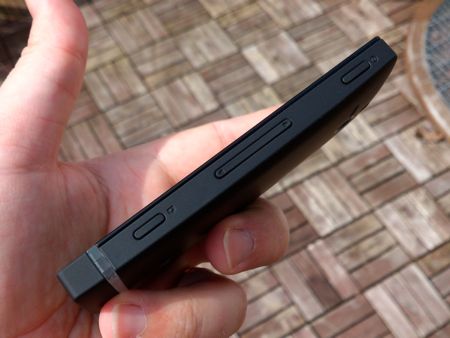 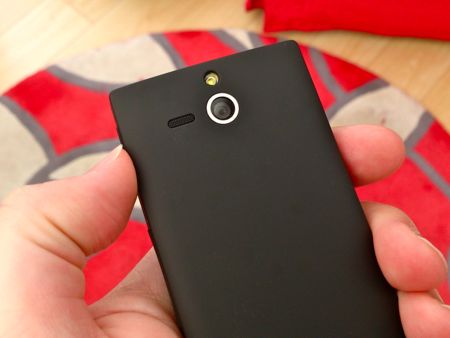 If you keep the phone in widescreen photo mode, the pictures are further cut in size to just 3-megapixels, but you can still get good photo results with the various smart or manual modes.

The other big advantage is a dedicated 'camera' button that allows you to fire up the camera at any time, even when locked in standby mode. There's no need to exit an app and find the camera app icon here, so the phone definitely scores points for making the process of taking a photo as simple as possible.

All things considered, the Xperia U is a very decent phone, and would have been a flagship if it were released in the early part of last year.

But it has one problem that could spoil everything, and it's far worse than a overly bright bunch of LEDs lighting the phone up like a Christmas tree.

For reasons unknown, Sony has included just 8GB of storage on the phone. That might sound like enough for most people, but the storage space is shared for different purposes, including app storage.

The end result is just under 4GB of storage space for your music, pictures, and video. That's less than half what you might expect (even if most people know that storage space is usually a little less than advertised after formatting). 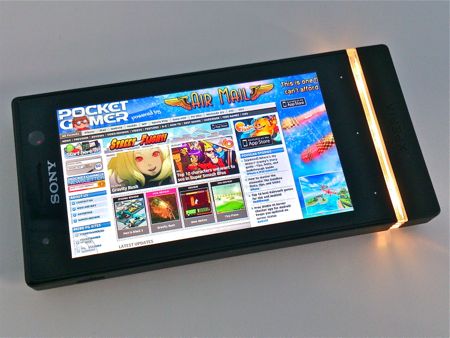 One way to lessen the blow is to use one of the many cloud-based services - either Sony's own unlimited music and video services or apps like Spotify, Dropbox, Google Drive, or Netflix.

That's all well and good if you're always near a nice fast wi-fi connection with no data limit, but if you expect to use mobile data, especially on prepay, you might quickly find that online streaming services are not a practical alternative to loading content on a memory card in advance.

There's a potential workaround: purchasing a USB-On-The-Go cable and connecting a flash drive (be warned, some may not work if they draw too much power), but this will lead to something hanging out the side of the phone. It's an option for some, but not a great one.

What's frustrating is that the phone is solid otherwise. It's very fast, has a good camera, and a fantastic screen. The 1,320mAh battery is good for an entire day of usage, and the phone looks and feels a bit different to the rest of the crowd.

So, it all comes down to the storage space. If you aren't planning on filling the phone with media, the Xperia U is an impressive offering that could save you a packet. Otherwise, it's a great phone let down by a silly decision that Sony hopefully won't make again.

A few years ago, even 4GB of storage space would have been plentiful. But that was then and this is now. Sony has really missed a trick here, as the Xperia U is an otherwise excellent performer that should have been a real contender
By Jonathan Morris
| May 31, 2012 |
Mobile
SEE COMMENTS

Version 2.0 of Chuck's Challenge is live on the App Store

Sergeant Frank Drebin Jr is back