It seems like summer is finally drawing to a close. The weather has taken a turn for the post-apocalyptic, the kids are back at school, and the consoles finally have some noteworthy games to play.

But while the Xbox 360 and its pals act like school teachers and have extended six-month holidays at the first glimpse of sunlight, the iPhone refuses to take a week off. All year round we've seen new games, big releases, and fresh ideas on our favourite mobile device.

This week is no different. There's another hazardously addictive release from storied developer Kairosoft, a huge Czech adventure to explore in Machinarium, and another 100-odd levels to sink your teeth into with To-Fu 2.

Enough jibber jabber. Let's get into it with Five Stars, our weekly roundup of the best new games on iPhone and iPad. 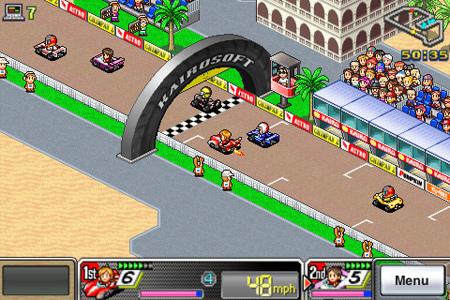 Once again, Japanese sim studio Kairosoft has put the entire world's productivity at risk. Every time the creators of Game Dev Story drop another cutesy micro-management sim into our hands you just know a good few hours of your life will be forfeit.

After managing saunas, private schools, and massive malls, the latest establishment for you to waste weeks presiding over is a race track and its up-and-coming team of drivers.

Much like creating a game in Kairosoft's iPhone debut, this time you're using research, a staff of engineers, and a whole mess of menus to build a perfect racing car. And instead of battling reviewers you'll compete against other drivers in hands-off races.

Once you reach the finish line you'll need to figure out how to do better next time - installing parts to take corners more quickly, upgrade your engines to reach top speed faster, or instal a cheeky nitrous boost - so you can reach that all-important podium finish.

Needless to say, Kairosoft's potent mix of a simple front end hiding a hideously complex spine of options, stats, and micro-managed menus leads to dangerously addictive play. If you grab Grand Prix Story be prepared to clear your schedule for that day. 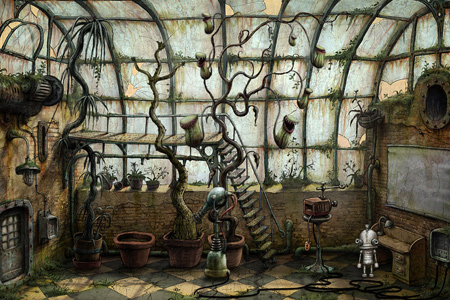 The iPad is a perfect fit for point-and-click adventures. It's no surprise to see so many adventure classics hit the App Store - the latest being robot-themed Czech indie epic Machinarium.

You play as a cute robot kid named Josef who's left stranded in the junk piles outside his steampunk home city. He needs to sneak back in, avoid nasty robo-bullies, save his tin can girlfriend, and defuse a bomb before hightailing it out of there.

For the most part, Machinarium is a true point-and-clicker, with proper item-based puzzles, doors to unlock, characters to help, and prisons to escape from. Although the game's characters don't talk - instead expressing their needs into pop-up thought bubbles - so don't expect any riveting conversation.

Not that the game is lacking for it. Machinarium is all about dropping you into a weird and twisted world, dominated by strange creatures and bonkers machinery. There's a robot band using an oil barrel as a drum, a cat made of cogs, and a dancing wrench. Just exploring the world, to the beat of its beautiful soundtrack, is a treat.

There are a few issues. The gorgeous hand-drawn backdrops have a habit of hiding objects you'll need to pick up, and some of the tricky brain-busting puzzles (like sliding tiles, playing Connect 4 and joining dots) can have you more stumped than the logic puzzles. Luckily, there's a built-in walkthrough to help out.

But Machinarium is a rare treat, especially if you ignored it on PC. It's beautiful, charming, and constructs a world so wonderful you'll have no complaints about aimlessly wandering around its surprising streets and buildings when you (inevitably) get stuck.

The twitchy, beefy console hero Super Meat Boy, and his masochistic spike-laden levels, just wouldn't work on a touchscreen. So it's only right that a touch-savvy hero who's made for a button-free interface be made from a meat substitute.

Enter To-Fu, the maleable bandana-wearing protagonist of HotGen's The Trials of Chi. After 100-odd levels of flinging about dojos, avoiding spikes, and collecting orbs, he's back in a surprise follow-up.

The core gameplay is much the same. Remarkably so. You stretch To-Fu's springy soy body out with your finger and let go to propel him across rooms, over spiky bits, and into exit portals. To-Fu 2 brings new obstacles like 45-degree blocks and ricocheting rebound bricks in its 100 all-new levels.

There's also a new Time Trial mode, which is all about collecting as much Chi as possible before a clock countsdown. Your best scores will be plopped on Game Center for all to see (and envy). There's also a store to purchase new costumes and dojo themes for your tacky little friend.

To-Fu 2 might look suspiciously like its predessecor, and you really have to scrutinise to find out where HotGen has added to To-Fu's debut outing. But if you enjoyed this smart and addictive platformer what's 69p for another 100 levels to go through? 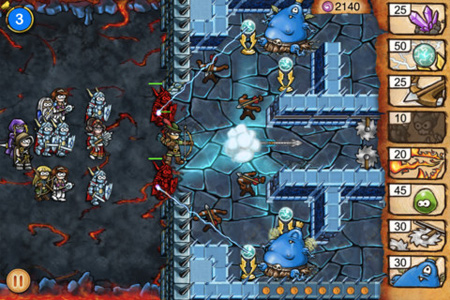 When it comes to tower defence, you usually play as the good guys. It's pretty typical to take on the role of white knight by guarding a princess, the coffers of the kingdom, or some easily-misused magic gem from legions of nasties.

But in Tiny Heroes, the latest game from the guys behind geoDefense, you're the bad guy and the titchy titular heroes are your enemy. They've set foot in your dungeon to loot and pillage your gold, so it's down to you - as Dungeon Master - to send them packing.

To fend these would-be adventurer types off you'll have to set traps and build towers to impede their progress, and summon minions from some totally evil parallel dimension to snuff them out for good.

Once you've conquered all 50 stages you'll also have a bunch of challenge levels to work though, and then Game Center achievements to aim for. And, as developer Simutronics promises, "new Campaigns, Challenge Levels and Defenses as downloadable content are coming soon." 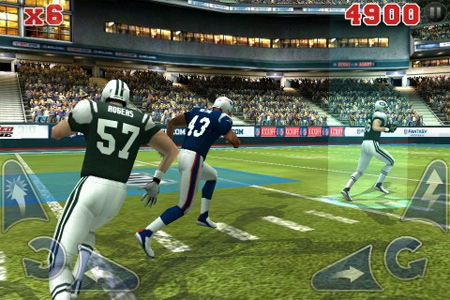 For an American Football fan, NaturalMotion and the NFL are a match made in heaven. Not only do you get the highly realistic graphics and addictive touchdown gameplay of NaturalMotion's Backbreaker games, but you also get the real-world teams and players who are signed up with the NFL.

This isn't a full-on football sim, to be clear. You take on the role of one player, juking, trucking, jumping, and spinning past ever-tougher rival opponents as he charges down the fields towards the touchdown... thing.

Or you play in defence, chasing down that running back to tackle him to the ground.

That tackle will really show you why NaturalMotion is called NaturalMotion. Its complex animation system allows for some of the most realistic moves and tackles you've ever seen in a football game. Add in some cool lighting and detailed models and you've got one of the best looking sports games on mobile.

The game's all about playing well and scoring with style to earn more NFL Points for your favourite team. And if you really want to follow in the footsteps of your fav' footy clan, use the Gameday feature to play alongside their real-world weekly schedule.