Apple vs the World

“Is 2011 the year of the tablet copycat?” Steve Jobs snidely asked at Apple’s first press conference of the year. When he looked out at the silicon horizon he saw nothing but iPad clones and copycats, slabs of Android that couldn’t compete with Apple on experience or price.

No, says Jobs. 2011 won’t be the year of the copycat, because the iPad 2 will blow them all out of the water. They’ve been vainly chasing a year-old dream, only to have the rug pulled out from underneath their feet just weeks before they start to ship.

But is that really the case? Is the iPad 2, that razor thin and feather-weight tea tray of dreams, really more powerful, more feature-filled, and more illustrious than the scores of competitor devices that are on the way? We’ll see.

We’ve pitted the iPad 2 against the four most eligible tablets that are arriving in the near future. Motorola’s do-all Android Xoom, Samsung’s super-sized Tab, HP’s ultra-sexy TouchPad and LG’s funky Optimus Pad. And we’ve compared specs, features and prices. Well, what we know anyway.

The Xoom, Motorola’s beefy Honeycomb tablet, is a tad larger than the lithe iPad 2, mostly thanks to its 10.1-inch display which just eclipses the iPad’s 9.7-inch screen.

Both devices pack 1GHz, dual-core processors - Apple’s A5 chip in the iPad and Nvidia’s Tegra 2 chip in the Xoom. With Apple keeping both the iPad’s memory, and the nitty gritty details on the A5 under wraps, it’s hard to pick a winner, but they’re definitely comparable in terms of raw pixel-pushing power.

If the iPad 2 carries the same lacklustre snapper as the iPad 2 (which Apple’s deliberately vague choice of words seems to suggest), then most tablets will beat it easily. The back camera might be able to record 720p, but its stills are a pathetic 0.7 megapixels. We’ll take the Xoom’s 5-megapixel camera any day. Same goes for the front: iPad packs a 0.3MP webcam, to Xoom’s 2MP.

Customisation isn’t the Xoom’s strong suit. You’re stuck on a 32GB device, and while you can certainly make it bigger with microSD card support you can’t make it any smaller, so you’ll be shelling out for space you might not even need.

Although, seeing as the Motorola Xoom is actually cheaper than the iPad - Dixons says it will be £450, which undercuts the £499 32GB iPad by some margin - that’s not too big an issue. 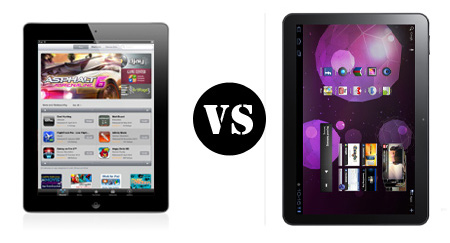 The Galaxy Tab 10.1, an upcoming super-sized edition of Samsung’s dinky Honeycomb Tab, is also slightly larger than the iPad, with its 10.1-inch display. It’s got a slight resolution bump, too - 1280x800 - to match the extra inchlets.

The Tab packs a rear camera that is orders of magnitude better than Apple’s shoddy cam. At a whopping 8-megapixels, it's not even in the same league. It also has a 2MP snapper on front, which outclasses the iPad’s 0.3MP dud.

The Tab’s price hasn’t been officially announced yet, but that won’t stop us unfairly pitting these products against each other! It’s reported that the Tab 10.1 will cost €699 (about £600) off-contract. If that’s for the 3G, 32GB edition, that makes it the exact same price as the iPad 2. 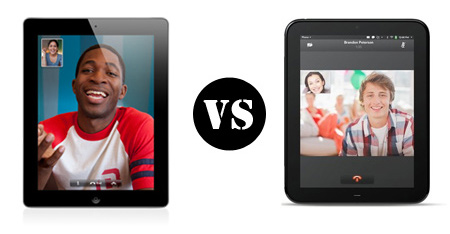 The TouchPad is more about interface, usability, and accessibly than specs. And with a tablet, or a “post-PC device” as Apple employees are contractually obliged to say, isn’t that really the point?

Pocket Gamer’s Will Wilson came home from MWC 2011 in Barcelona babbling and enthusing about the HP TouchPad. But not about its dual-core, 1.2Ghz Snapdragon CPU - probably better than the iPad’s 1Ghz A5 - or its 1GB of RAM - at least double the iPad 2’s memory, we bet. It was about some ripple thing on the OS.

“It also ripples when you touch it, like a stone hitting still water, which is lovely to look at,” he said, like a drug addict describing his latest trip. It’s also got some unique multitasking with linked applications put together in groups, and an interface design that could potentially rival iOS.

There are some hefty limitations, though. By going with a webOS operating system over Android, the Touchpad won’t have a massive catalogue of apps from launch. We also have no idea how much those beefy specs will cost you.

HP will probably save money by scrimping on cameras, though. The TouchPad only has a front-facing camera, with a paltry 1.3 megapixel resolution to boot, and nowt on the back. No rear camera. What is this, the stone age? Get with the times, HP. 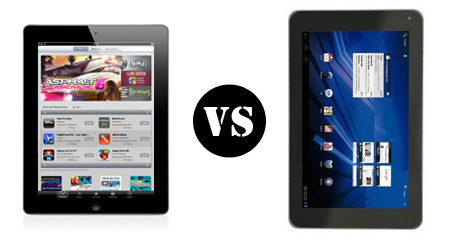 More gooey Honeycomb goodness, this time from the Korean megafirm LG. The Optimus is yet another Android tablet with the familiar dual-core 1GHz Tegra 2 chip from Tegra, meaning it’s on par with the iPad 2.

It’s got a typical 2MP front-facing web cam, but two 5MP snappers around back for 3D photos. Also, people keep going on about the LG Pad having an anaglyph 3D screen mode with those cardboard specs. But surely any colour device can have that mode? I had a book with 3D pictures of dinosaurs that used that “technology”. A book. Remember them?

The LG Pad, with its non-conformist 8.9-inch display, also comes packed with technologies that the iPad 2 just doesn’t have. It can run Adobe Flash, accept microSD cards, and has direct ports for USB and HDMI.

So how much does all this cost you? Oh, only a THOUSAND EUROS. That’s right, LG has announced that the device will come with a €999 price tag in Germany, which converts to about £850 in the UK. Seeing as you’ll get change from £700 on the most expensive 3G and 64GB iPad 2, you’re fighting a losing battle, LG. Sorry.

Competition: Win 1 of 5 signed copies of the Broken Sword: The Smoking Mirror comic