Now that Google and T-Mobile have rolled out the paid Android Market over here in the UK, we thought the best point of reference to decide on its usability was against the original and the most popular - the iPhone’s App Store.

The App Store has had longer to establish itself and assert its authority over the various newcomers now reaching the shore and climbing into the world. In less than a year it's become a serious competitor to Nintendo and Sony and a hotbed of both commercial and creative innovation.

But then, who'd bet against Google?

Before you can buy anything, you naturally need to register your details with the organisers of these online stores.

This is where Google has already got its foot in the door, since the majority of us have registered with Google at some point in the past - either to buy something using the Google Checkout, to get ourselves a Gmail account, or simply to customise our browser’s search page.

The G1 insists on you setting up a free Google account, so if you own the handset, much of the work is already done when it comes to getting yours details on the Market.

Android pulls in all your details, including any credit cards you have registered (allowing you to choose your payment method when buying a game, which is a nice feature) so it’s very quick and easy to become a registered buyer.

Of course, most iPod owners are also equipped with an iTunes account, so you're probably already on the ladder when it comes to App Store cruising.

If you’re not already registered with Apple, there's the inconvenience of downloading and installing iTunes whether you intend to use it or not, and it’s one of those programs that thinks you’d be better off signing over all PC functions to Apple. Bah.

So as far as getting in through the shop door, Android is quicker, easier and lighter, but things aren’t so rosy when it comes to browsing. 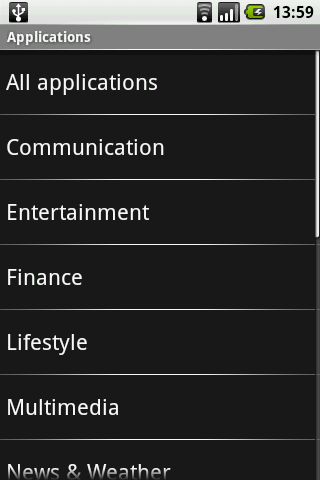 Since the Android platform only allows you to access the Market through the actual G1 phone, we’re going to base most of our comparisons on handset access. But there’s no getting around the fact that the iPhone has iTunes, and despite it being a bloated albatross of a program, prolonged accessibility is undeniably easier through a desktop computer.

Android has apparently made an effort to reduce the number of categories, and everything’s accessed through big, bold buttons, so you can surf the Market comfortably with a single finger.

But it’s not long before your refinement options run out, and all you’ve got to look at is a long list of applications. These can be sorted by date or popularity, and by going through the menu you can filter them to only show free or paid apps. 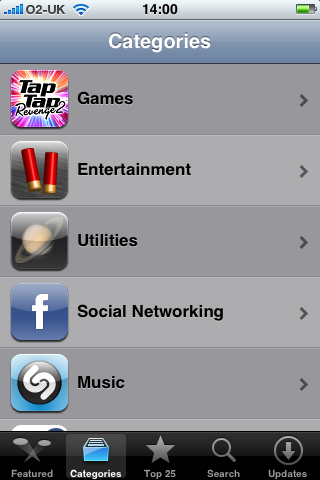 This is pretty much identical to the iPhone layout, though it takes fewer presses to sort the App Store than it does to sort the Market. The constant switching between hard and soft buttons on the G1 doesn’t quite qualify as a chore, but neither is everything right there under a single thumb as it is with the App Store.

Scrolling through the list is also noticeably smoother on the iPhone. The Android only loads in a few items at a time, then attempts to expand the list on the fly. Even with a nice strong wi-fi signal this is laboured and jerky, while the iPhone manages to populate a list of 25 items almost immediately, and waits for you to tell it whether or not to expand it.

Again, flipping out the keyboard isn’t a huge inconvenience, but it’s yet another action when it comes to searching. The iPhone pops up its keyboard, and with the predictive typing, makes it a doddle to hunt down that elusive app.

Perhaps Android will even the score on this front when the onscreen keyboard, Cupcake, is made available (and it’s imminent for the G1, we have it on good authority), but right now a search is easier on the App Store.

All told, the App Store offers much smoother and organic accessibility than Android, and when you factor in iTunes against the gaping void of desktop inaccessibility on the Android front, the Market is far clunkier.

They might be cheap, but we still need a good sales pitch to get that application from the online store and onto our handsets. So which shop offers the most info to help you to decide whether or not to make a purchase? 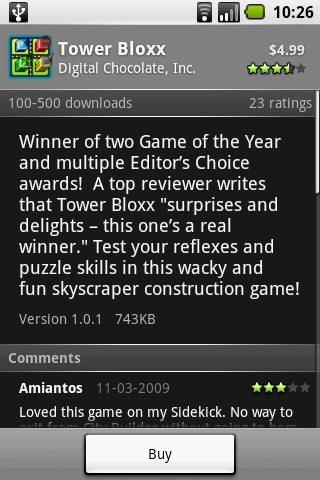 A good description is really down to the developer, and both the Market and App Store prioritise this lead in to the product.

We’re more likely to trust the views of other gamers, of course, so player reviews are vital. Again, both offer players reviews directly from the application page, along with a five star rating.

Neck and neck so far, until it comes to illustration. This is the third most vital aspect in deciding whether to buy an application - we want to know what it looks like, especially with games. Therefore it’s utterly inexcusable that screenshots aren’t included in a Market listing. The App Store offers up to five full resolution screenshots, and demands that at least one or two are included with every listing. 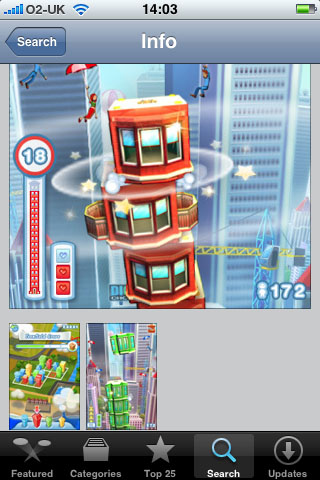 That you’re effectively shopping blind on the Android Market is a serious issue. Even if you’re determined to buy on the Market, how do you know which sudoku, or chess, or Tetris, or Breakout, or strategy game you want when there’s no graphical comparison to make?

When it comes to providing information on your purchases, the App Store kicks the pants off the Market.

This is very much linked to the Getting Started section, as most of the information the Market and App Store require in order to sell you something is entered at the beginning. Registering a card with either company carries that info over to the respective online stores, and once you’ve hit the 'buy' button on either, it’s very quick and feels relatively secure to make a purchase. 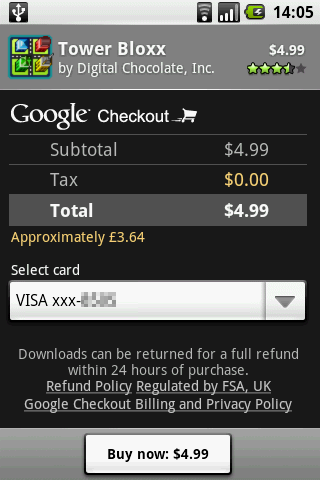 One anomaly with the Market is the currency. The developer chooses which currency will be displayed (regardless of your region) so naturally it’s mostly in dollars. While this isn’t crippling by any means, it can add a certain vagueness to the purchase that could put you off as it gets into the upper pricing tiers. At the very end of the checkout you do get a rough currency conversion, but it’s tedious going through the process just to get an exact figure.

Of course, the benefits here are that there apparently isn’t any region specific apps, as there is on the App Store. There’s also less danger of ‘rip off Britain’ coming into effect - not that we’re suggesting that happens on the App Store, mind you. 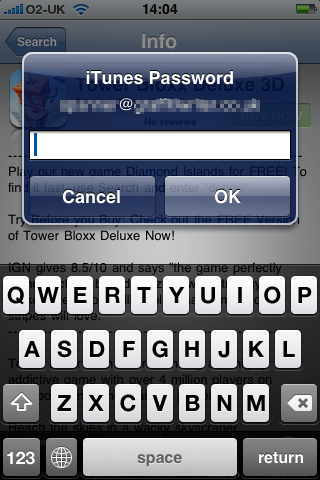 But for clarity’s sake, the Market really ought to be selling in our native currency, as things will only get more confusing once we’ve got Euros on there as well (and Yen, Australian dollars and whatever else in the near future, presumably).

One thing you get with the Market is a no quibbles 24 hour refund, of course. Uninstall an app within 24 hours, and you get your money back.

This might be wide open to abuse, but not really in a way that’ll affect the buyer, so it’s a huge boon to the Market. Apple would rather put itself on the head of William Tell’s son than instigate a refund option, so points have to go to Google for that one.

These two systems are, overall, far too similar to really say one is hands down better than the other. While the Market has its valuable refund option, neglecting screenshots and the currency confusion does it no favours - especially with the clunkier interface getting in the way.

Too many functions of the Android (in general, but also on the Market) are hidden away behind menus, buttons and sliding screens.

The App Store’s bane is also one of its greatest assets - iTunes. That you’re freed from the device for more in depth browsing is a huge factor in its accessibility, while the on-device App Store places all the options right at your fingertips in a very intuitive manner. 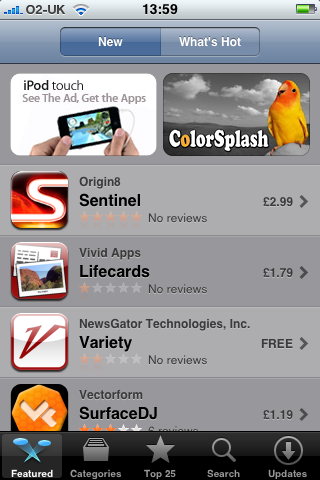 Once everything’s set up and running (which is slightly more of a chore with the iPhone) the App Store is a smoother, more organic experience that delivers a better perception of the product you’re thinking of buying.

But the Market’s refund function is huge. Really huge. With some considered refinement of the Market application and a better designed handset (sorry HTC – the G1’s a good first effort, but doesn’t cut the mustard against the iPhone) the Android system could easily win out. Right now, shopping with Apple is a little bit better.

WWE Legends of WrestleMania greases up for mobile

Army of Two: The 40th Day coming to PSP