Chatting with the people who made Crash Boom Bang!

Handy guys to have around for a party... 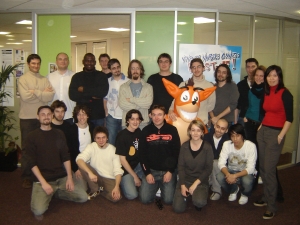 It's no trival pursuit trying to pack a bandicoot into the confines of a mobile phone. We caught up with Crash Boom Bang!'s producer, Elodie Larre, to find out how the developer did it. Where did the idea for for Crash Boom Bang! come from?

The demand was to create a party game like the DS version, so the big challenge was to adapt a party game for the mobile world. We didn't just want to make another multiplayer game where the players just pass the phone to each other.

In Crash Boom Bang!, the idea is that the phone itself is part of the game. The game is inside the phone but also outside (you have to be the first to catch the phone or you will incur forfeits, such as playing with one hand behind your back, or with one eye closed, or playing with your chin...)

Who's it aimed at – hardened Crash fans, or completely new gamers?

I think this game is totally innovative, because it's not only about playing mini-games but above all a very new way of playing. So the game will attract both Crash fans, happy to be immersed in a familiar universe, and also new gamers, interested in discovering an amazing way of playing.

What was the biggest challenge in Crash Boom Bang!'s development, and how did you over come it?

Actually, the biggest challenge was to try to achieve the maximum number of varied mini-games, whilst keeping the size of the game in the phone's memory as small as possible. So we created the graphics and animations in order to maximise the reusability of these materials in most of the mini-games (for example, Crash's head is pretty much the same in all of the mini-games).

What are the strengths and weaknesses of mobile as a gaming platform?

The big issue for the platform is memory size. We have to find tricks to make games more and more beautiful and rich while dealing with the constraints imposed by the platform. A great strength of the platform is its physical size. Since a phone is easily held in a player's hand, it was possible to make the device itself the main element of Crash's gameplay. Moreover, the portability of the platform makes it possible to play anywhere, anytime, and with anybody.

How does mobile shape up now compared to console?

We are not very far from PSone quality but memory size remains a big issue. Currently, the new phones are more and more powerful, so the gap between mobile phone and PSone should be filled very shortly. 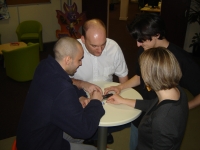 What is the one thing you'd like to see change in mobile games development?

Today, a very important aspect of mobile development is having to port our games to the maximum of phones. In fact, to cover about 450 handsets we are forced to make about 150 versions of the game. So, in the future, I would like more and more handsets to be compatible with which other.

What other mobile games do you rate, and which (if any) influenced Crash Boom Bang?

We test a lot of games to see what the other companies devise in order to create new concepts. Concerning Crash Boom Bang!, we were influenced by Wario Ware, the console game.

The most RAWK mobile game ever!