Dinosaurs like killing stuff. I mean, I've never actually met one, but from all the popular media I've consumed, that seems to be the most likely truth of the situation.

And as such, they're difficult to live around. Or, survive around. Especially in a survival game. That's what this is.

ARK: Survival Evolved will task you with living, which will be pretty difficult when you're sharing the island with dinosaurs. But don't worry, we've got a few nice tips which will definitely make things much easier for you… 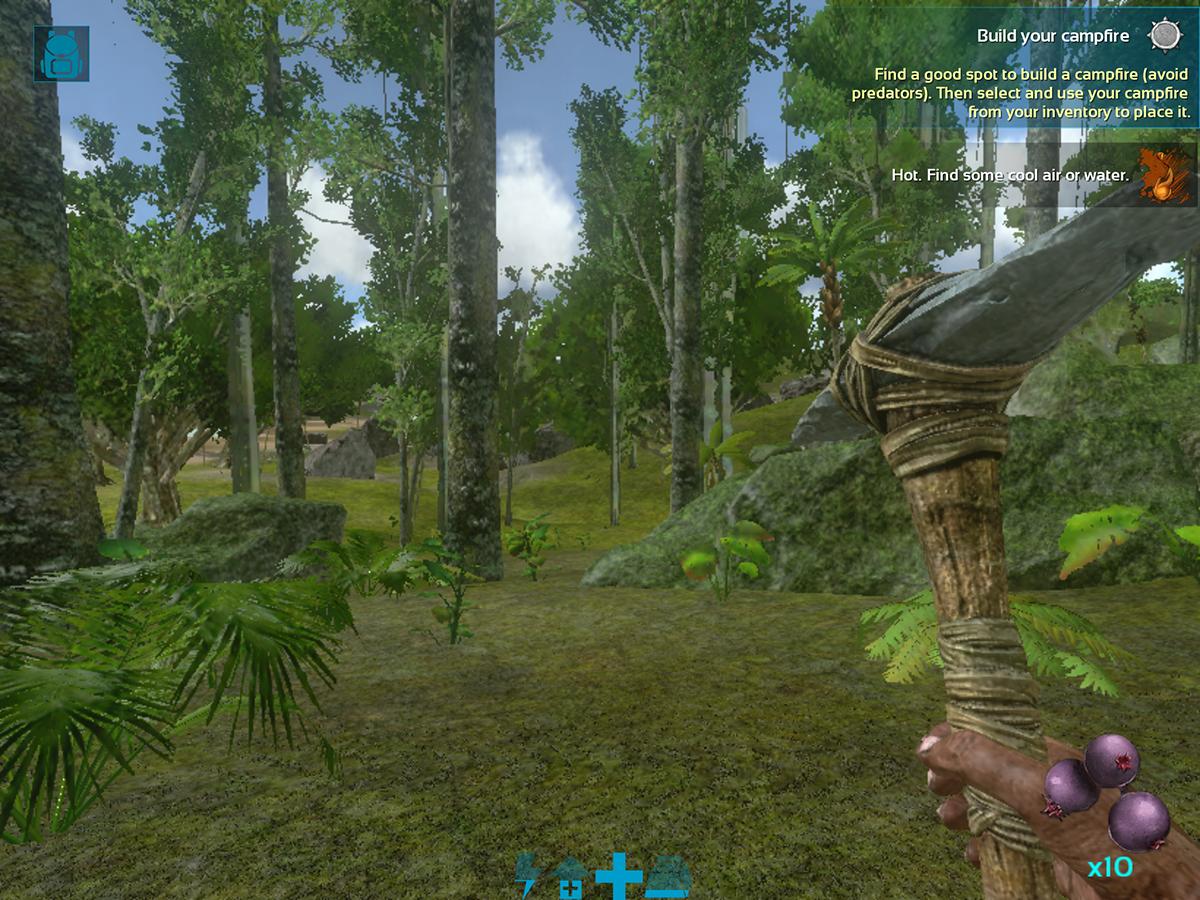 Have you ever played a survival game before? It's this novel concept where you go around collecting things, in order to build other things, to make collecting and building things easier. That's a progression curve my friends.

ARK: Survival Evolved is no different, here you'll be collecting wood, stone, thatch and a whole bunch of other ingredients for your crafting recipes and to make survival just that little bit easier.

Your search will start on the ground where you can grab at stone by tapping the right side of the screen, and you can punch fallen trees - or still standing trees - in order to collect wood. 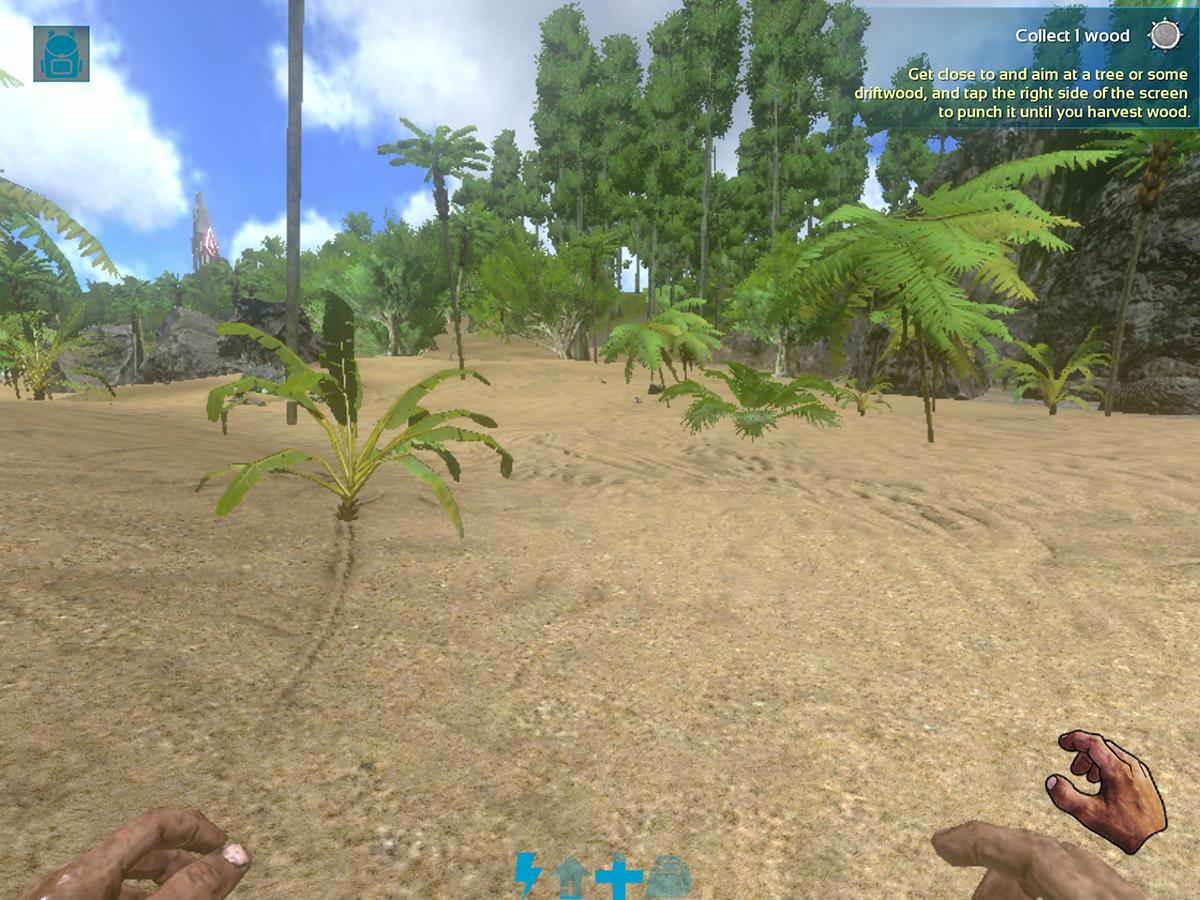 Unlike in Minecraft and some other survival games, here punching stuff isn't necessarily a good idea. Have you ever actually tried to punch a tree? Well, I haven't, but I take it on good authority that it doesn't end well.

In ARK, punching trees and rocks will make you take damage. Not a lot, but enough to discourage the idea. Of course, the way to get around that is crafting.

Pop into your inventory (that bag icon in the top left, or you can scroll from the left of the screen to access a quick menu) and go to the crafting menu, where, with some wood and stone, you can get a pickaxe crafting to make gathering much more painless - literally. 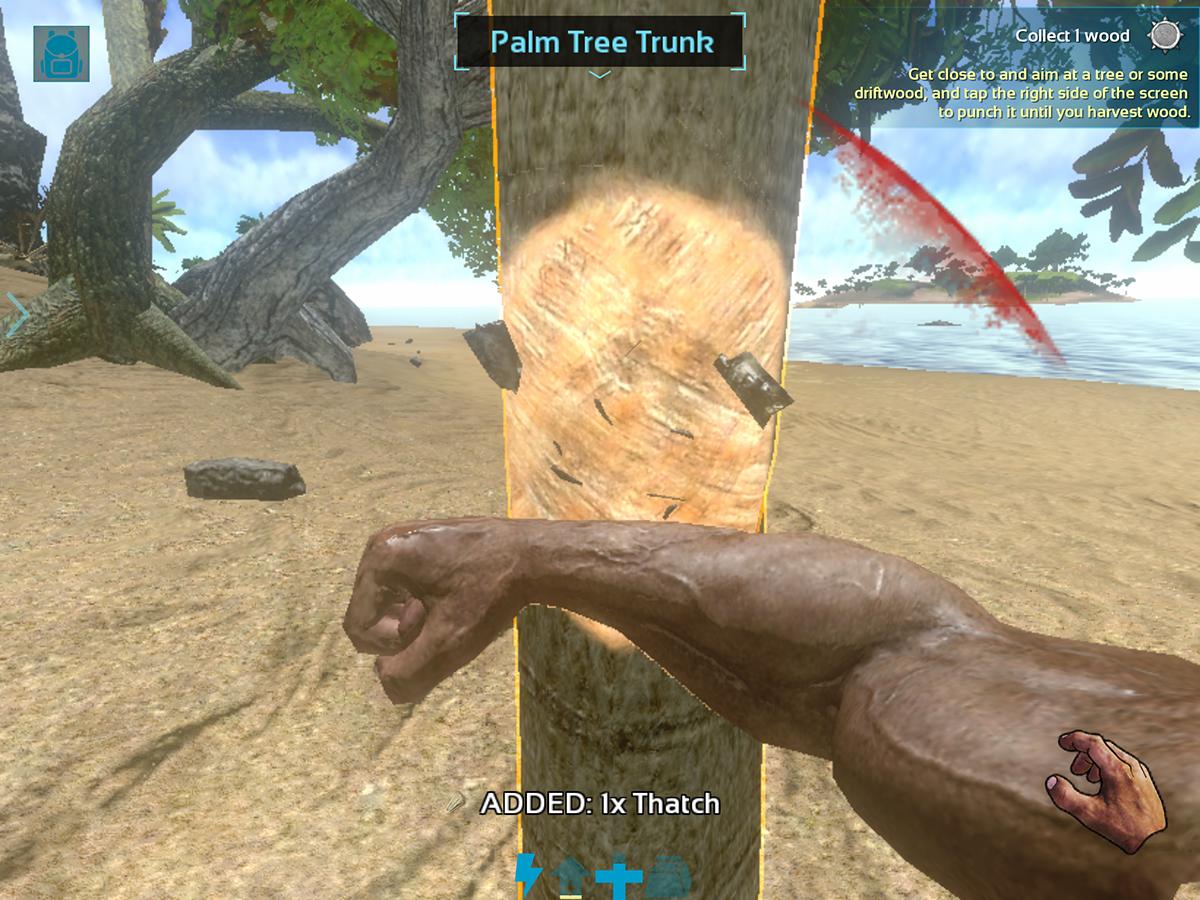 Now that you know how to craft, it's time to craft a whole lot. Back in the inventory, go to the Engrams menu, where you'll be able to learn new abilities.

Now, you won't have any points immediately, but as you explore, gathering, kill small creatures and craft new items, you'll earn points you can use to craft new Engrams, giving you access to, well, more things to craft.

Weapons at first, then the essential building blocks for making somewhere to live, like a floor, walls and roof. After that you'll get sleeping bags which can act as a respawn point and more. Getting Engrams and increasing what you can craft is essential for progress. 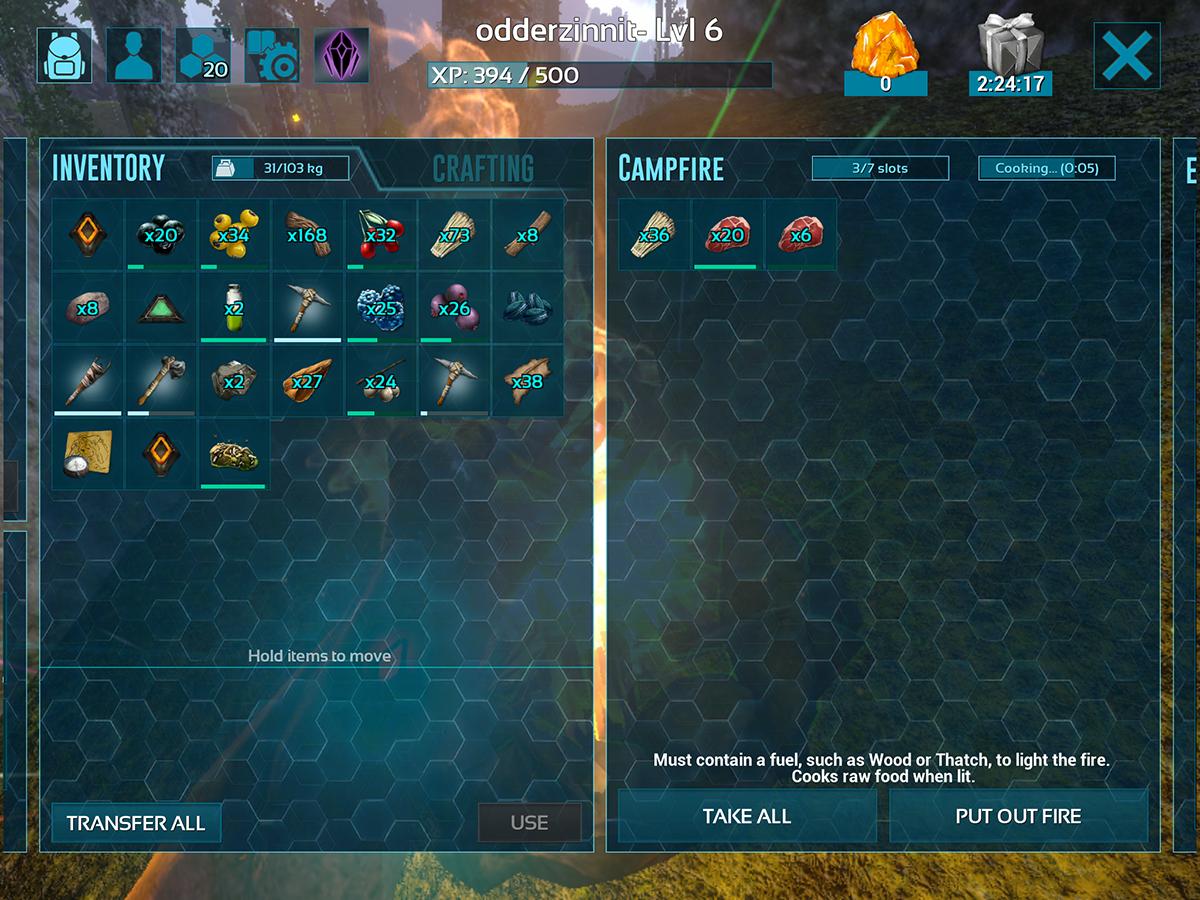 If you've just started the game and you see a big dinosaur, what do you do? You run. You just, run away, get the hell out of there.

Big angry carnivores won't let you get away easily. Sure, you could possibly take some of them down if you strafe round them and avoid their attacks, but it's a difficult game.

If you enter a dangerous area the game will tell you so, and if you're not prepared for a challenge, you shouldn't be in there. Make sure to steer clear until you've got the proper equipment. 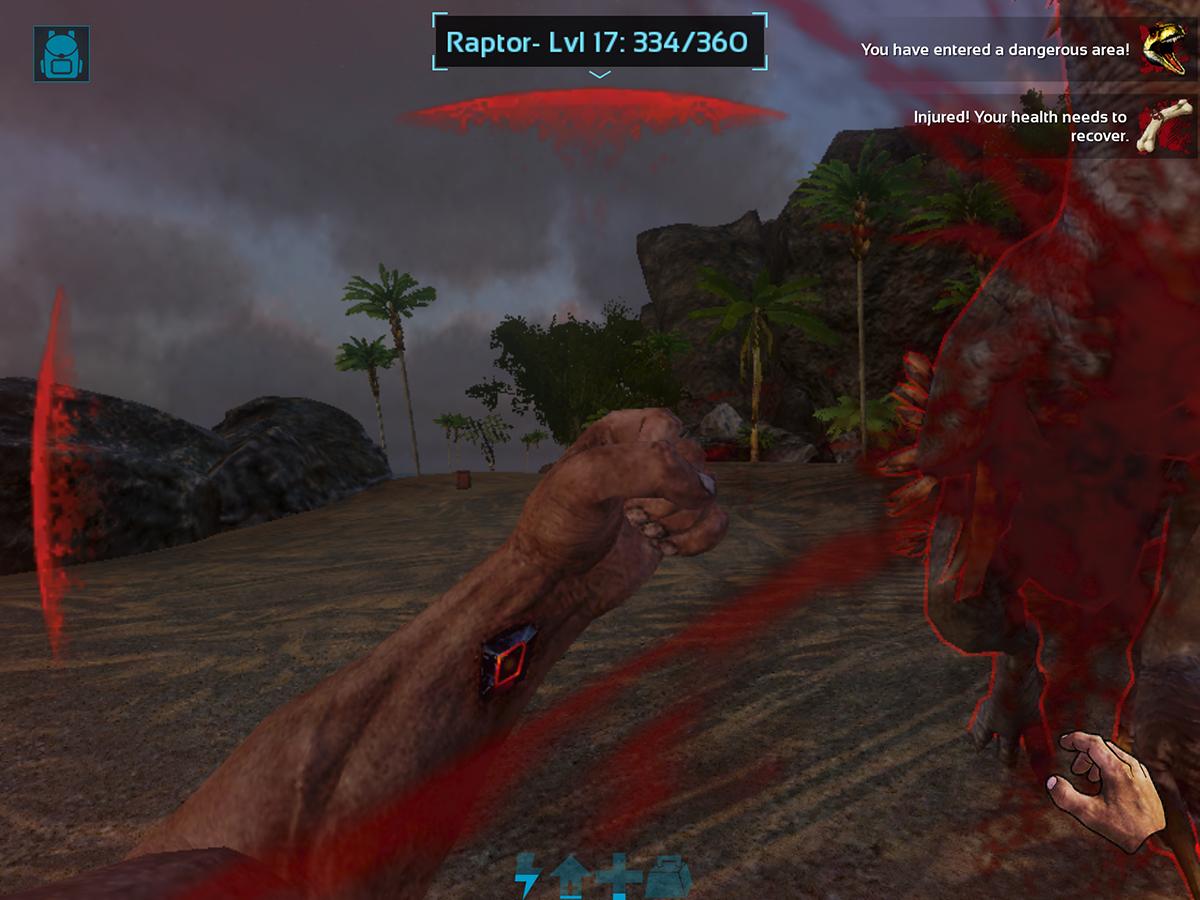 5
Literally keep hitting things until they fall into the ground

Heck, even combat. See a dodo? Small angry dinosaur? Just hit it until it dies, and then continue hitting it to collect its meat, at which point it will fall through the floor.

Getting feathers from dodo and hides from small dinosaurs can be just as important as wood and stone for crafting. Plus, it's funny to see stuff just fall through the floor. 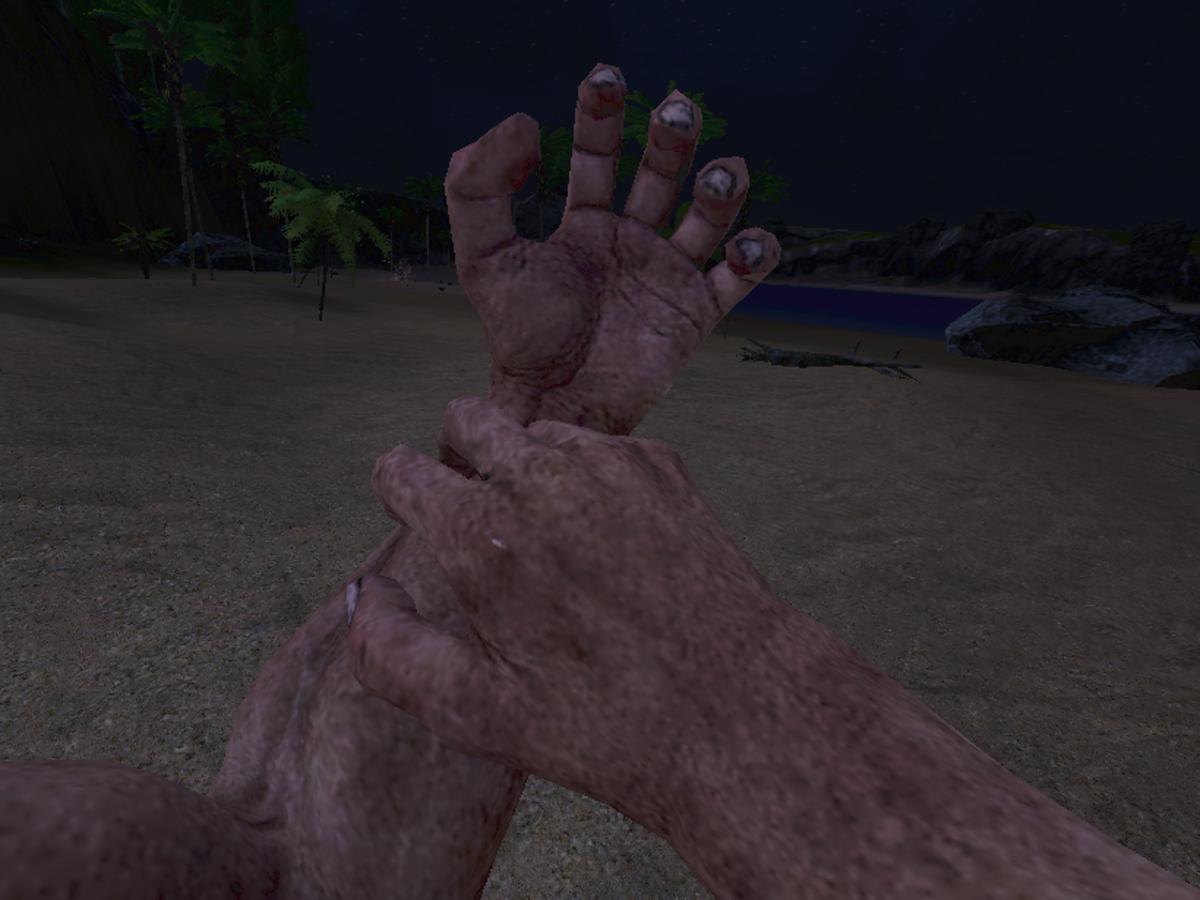