The immensely popular PC franchise Diablo ought to translate to mobile as smoothly as a sharpened sword slices through a demonic minion.

I mean, it just comes down to 'tap to move, tap to attack', after all. But Blizzard has shown little inclination so far to dip its toes into other waters.

Even worse, the best contenders on Google Play are hard to recognise among a veritable avalanche of weak cash-ins and greedy free-to-play titles.

So, here are our picks for the best games with which to get your hack 'n' slash fix on the world's most popular mobile OS. 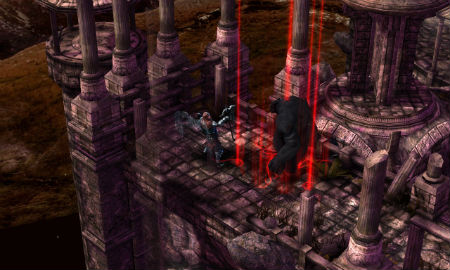 Archangel's biggest strength is its single-minded focus on doing one thing, and doing it well. In this case, that one thing is throwing waves and waves of enemies at you and providing you with a delightfully diverse selection of methods for carving them up.

That simplicity lets it down occasionally, though: there aren't any classes from which to choose from, for one. And there's that occasionally monotonous palette of foes and level designs.

But the designed-for-touchscreen combat - including fantastic powers like walls of fire and brutal melee swipes - and top-notch graphics and sound more than compensate for these minor shortcomings. 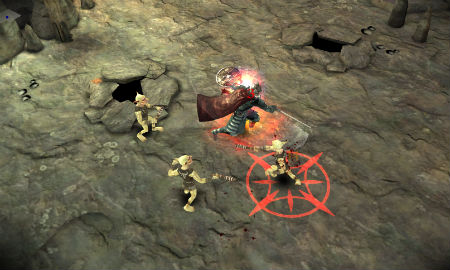 Released not long after Diablo 3, Heroes Call is in many ways the ultimate interpretation of the genre on Android devices.

This one contains lush graphics, rich sound, simple controls, a variety of interesting skill effects, and a decent plot to get your teeth into. Perhaps best of all, though, is the bewildering array of items you can equip and recombine to kit out your brave adventurer.

Saying that, it is a little abusive when it comes to the free-to-play elements. But it's far from being unfun or unfair. And given it's free, it's very much worth your time checking out.

Emissary of War
By Cedar Hill Games - buy on Android 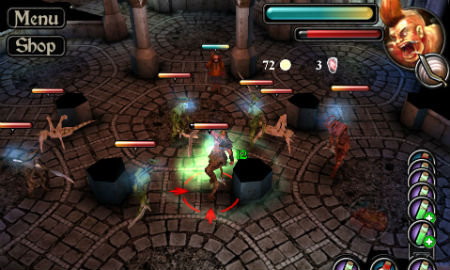 Most games in the Diablo style stick with putting you in control of one hero, facing off against unending hordes of enemies. But Emissary of War assumes that double the character is double the fun, so you take charge of a duo here.

It works surprisingly well, forcing you to use your tank character to dish out the pain and protect your more fragile potion-lobbing friend from being overwhelmed by monsters. Plus, the well-designed interface makes controlling two characters at once a doddle.

And it's nice to see the 'pair' dynamic fully utilised and explored here, with some witty and amusing banter between the characters backed up by some sharp writing and a satirical eye. 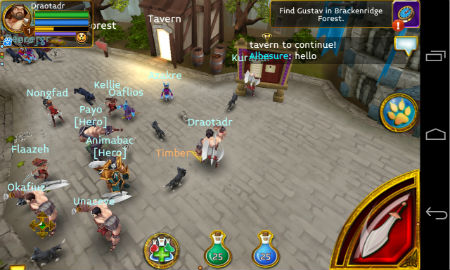 Diablo didn't become wildly popular just because it hit a sweet spot in terms of accessibility and addictiveness. It did so because it offered players the chance to go on adventures together online, combining powers to take down bigger monsters for better loot.

The games we've highlighted so far are single-player experiences only, but Arcane Legends tries hard to replicate the multiplayer vibe of Diablo, albeit more in MMO style than with the looser party associations of its inspiration.

Using the same engine as previous entries in its Legends series, Spacetime Studios has put everything it's learnt from older iterations into making this a polished, pleasing experience at the pinnacle of action role-playing.

Zenonia 4
By Gamevil - buy on Android 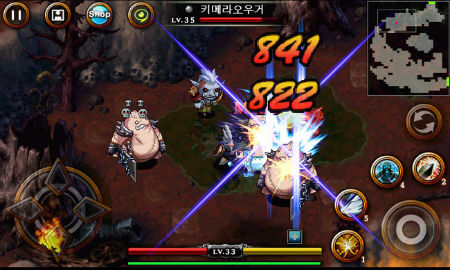 But there's a lot to be said for the more light-hearted approach of Japanese RPGs, and the Zenonia series marries their freedom and sense of fun with the traditions of the hack 'n' slash genre.

Zenonia 4 is perhaps the best game in the series, striking a balance between building on older iterations and not becoming too worn and stale.

And it might be the only one you ever need, for there's a colossal roster of quests to complete, treasures to discover, and monsters to carve into itty-bitty pieces here.

Out at midnight: Kick arse for the Lord in Unity and Black Tower's Archangel for iPad and iPhone