He's one of the few characters with which Rovio has done something different in this sequel, you see. I mean, you can use his grotesquely long tongue to swing around lumps of scenery.

And so when you see Jar Jar on your rack of birds, your heart lifts a little. Here's someone new and interesting. And when he's not there, you feel a little tug of sadness, because it probably means the level's going to be a bit bland.

Sure, Rovio does what it's good at here, throwing in a few surprises and fresh ideas. And while it makes for a perfectly entertaining few hours of play, by the end you're left with a feeling of déjà vu.

Angry Birds Star Wars II is set during the events of The Phantom Menace, and is all about throwing Star Wars-themed birds at Star Wars-themed pigs. Or, in a radical departure from the first game, chucking pigs at birds.

Once again, you're armed with a lightsaber catapult from which you can toss a set number of characters. Each character has a special ability that you need to utilise to smash a structure containing some loathed enemies.

So, Jedi toss their signature sword-y weapons or use force push to create havoc. Droids have lasers that blast out three rounds. And Jango Fett has a rocket launcher with which he, well, launches rockets. You control these special moves via taps on the screen.

The most interesting addition is the grappling hook. This enables you to snag onto bits of scenery and spin around them, then tap the screen again and spring off. There are plenty of interesting applications for this devilish manoeuvre, such as picking up pigs and throwing them off-screen.

You're always presented with plenty of options on each of the different levels, with hanging things, exploding boxes, and precariously positioned beams affording you plenty of choice in terms of destruction.

There are levels in space, levels underwater, and levels on the ground. Everything works well mechanically, the game looks gorgeous, and there's still a little spark of pride when you complete a particularly tough level.

You can spend points you earn by playing on packs of new characters whom you can add to your arsenal if you get stuck. There are loads from which to choose, but throwing them into the mix does sort of undermine what made the first Angry Birds game so great.

There are levels in the original slide-to-fling Angry Birds experience that will make you howl with rage. Here, though, you can polish levels off quickly thanks to a helpful Wookiee.

Angry Birds Star Wars II represents a mash-up of all the good and bad that Rovio has done with its hugely successful series. It's fun, it's frustrating, and it's dripping with the sort of merchandising opportunities that would make even George Lucas blush.

In the end, though, save for a few fresh treats, it's more of the same. And not that much more, if I'm honest.

Like the films Rovio is aping here, this second bite at the Star Wars cherry just isn't as good as its predecessor. Still, at least it's done wonders for Jar Jar's reputation. I can barely remember why I hate him so much. 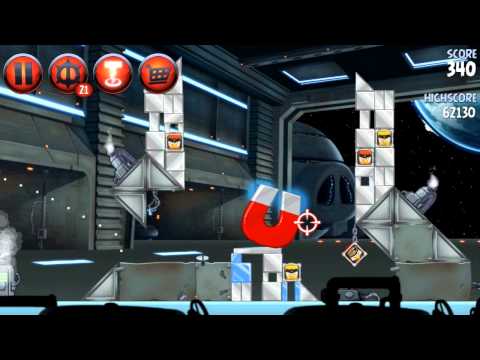 It's more of the same. For some, that's going to be enough. But if you're looking for innovation in Angry Birds Star Wars II, you're going to be a little disappointed
Next Up :
PUBG New State review - "Not-so-new state, but still enjoyable nonetheless"