Age of Rivals is a digital card game that you can play in super short sittings. It takes about 15 minutes to play through a whole game, and every time there's something different for you to discover.

It's not without its problems, but there's a depth here that other games of the same length can't emulate. Throw in multiplayer modes and you've got an intriguing prospect.

And, quite frankly, it's dirt cheap. It might not have the polish and swagger of some of the bigger games in the genre, but it's still well worth checking out.

The game sees two players facing off to see who can build the best city. This isn't a sedate affair though, you're fighting and conquering as well. And it's all very neatly condensed.

There are four rounds, and these rounds are cut into five stages. First you build, buying eight cards. Then you conquer, totting up your attack points to take over other cities. Then you have a war, with those same attack points thrown against your AI or human foe. 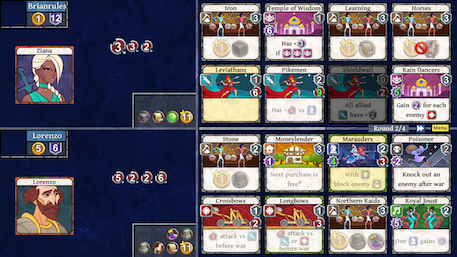 After that there's a scoring round, and then an ending stage where various effects are taken off or applied, and some of your cards are literally consigned to the graveyard.

The eight cards you buy in your first building phase are added to a hand. In rounds two and three you're dealt four of these back. That can mean you end up with some duds from the get-go.

Then in the fourth round all of the cards that have been put in your hand are dealt back to you and you need to buy just eight of them for the final showdown.

You start the game with 20 gold, and get a small amount returned at the start of each round. You'll need to play trade cards in order to earn more. There are resources as well, which you can use to tax your opponent. 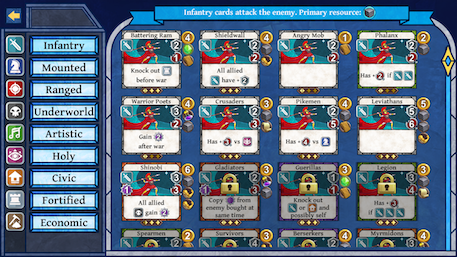 It might sound pretty complicated, but once you get to grips with things it's actually very intuitive. And since you can see the cards your opponent is playing, you can play tactically without too much fuss.

Rather than figuring out the best deck combinations, the game is more about making decisions in the heat of the moment.

Should you go for offensive moves this round or try and earn more culture points? Is it worth building that wall if your opponent is just going to use the card that will knock it down before the war starts?

The brevity of the play sessions does mean you don't really get any theme shining through Age of Rivals. You never feel like a monarch, just another card jockey.

But at the same time, you're going to find that there's a deep and engaging experience here. You'll get roll your sleeves up and get stuck in, and while it doesn't have the staying power of heftier experiences, it's definitely worth picking up.

Age of Rivals isn't perfect, but it's definitely worth your time all the same
Next Up :
Hindsight review - "Deeply emotional but a tad repetitive"