Snooping through someone else's phone has never been easier

A Normal Lost Phone is an inventive mobile classic which puts you into another person’s shoes as you slowly uncover their plight and uncover their deepest secrets all through their phone.

It's launching on Nintendo Switch this week too, so we’ve revisited the game and decided to give you everything you’ll need in order to complete it - aren’t we nice?

In this walkthrough you’ll discover important clues and passwords to help you progress, but be warned, there will be spoilers ahead.

For everything you need to complete A Normal Lost Phone, just read on! 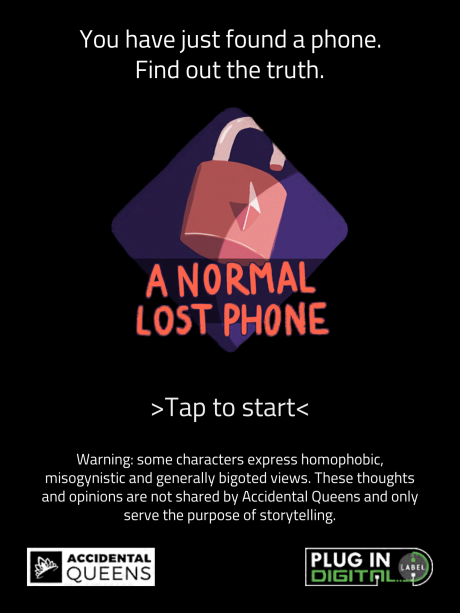 As you jump in to A Normal Lost Phone you’ll start on the messages screen, with Dad sending you some new messages.

There’s loads of background info and characters in the messages that will become relevant to the story later, or hint at things to come, so reading through all of them is advised. 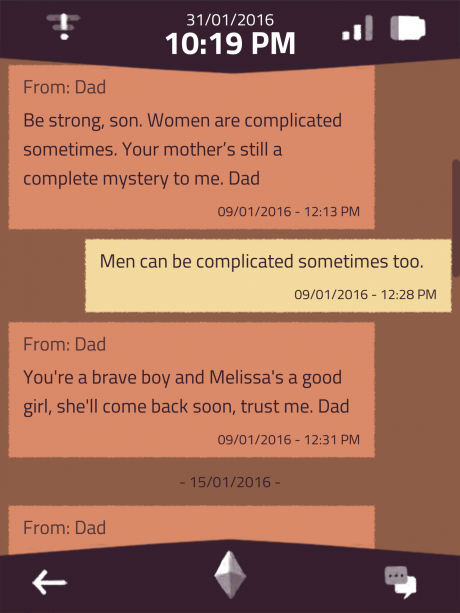 To delve deeper into the phone, you’ll need to activate the WiFi for Melren. You need the password, which is hinted at in Uncle Raymond’s messages.

You can check Uncle Raymond, and then Teo’s messages to get a hint. The password is actually the Melren zipcode, which you can find in the Weather app. 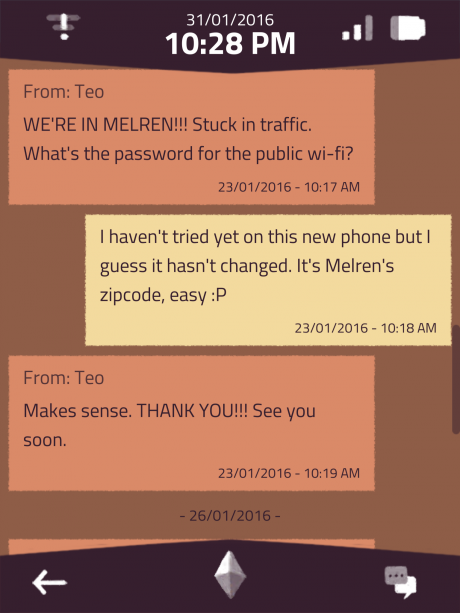 Now that you’re connected to the internet you can start delving into the emails.

Read through all of the emails in all of the folders, just like in the messages, for more information about what is happening - particularly the messages from Lovbirds and Alice. You can also tap attachments to save them. You can view images in the gallery, and music in the music app. You also get the dates the images were taken, hint hint.

There’s an unfinished email in the drafts folder that you can send, prompting Alice to reply. 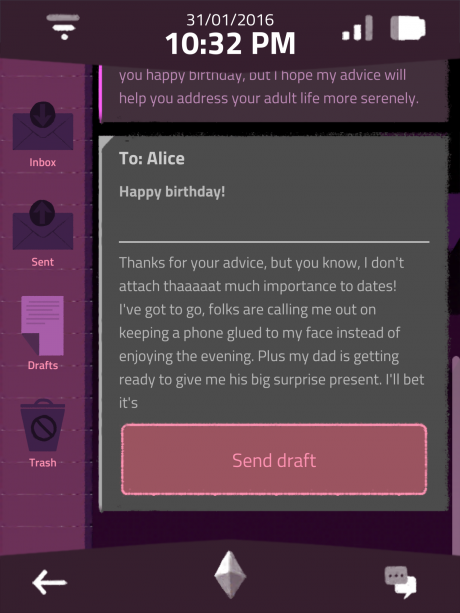 In her reply, Alice drops a hint that you often use important dates as passwords. You can use this information to crack in to the Lovbirds app, with some details.

You can figure out the passwords yourself, but an important piece of info the game doesn’t reveal is that dates are often four figures in month/day order. 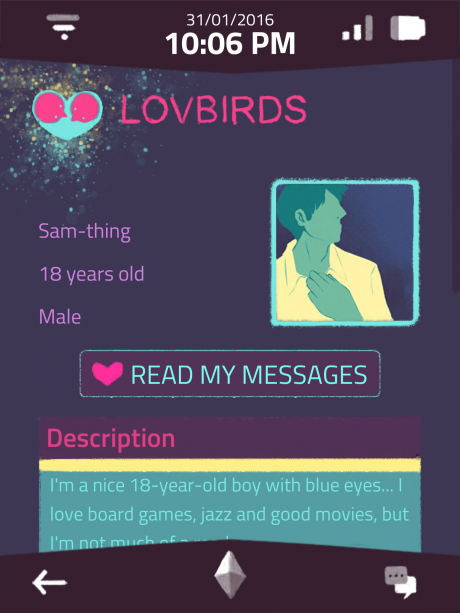 The password for the Sam-Thing account is 0131, their birthday, of course. Here you can read through Sam’s messages to illuminate yourself.

Now you can go through Sam-Thing Else’s messages, and things here are much more interesting, especially the chat with Phil_free. Read through the convo, taking note of the forum link and his prompt for a picture. Remember, you have blue eyes. 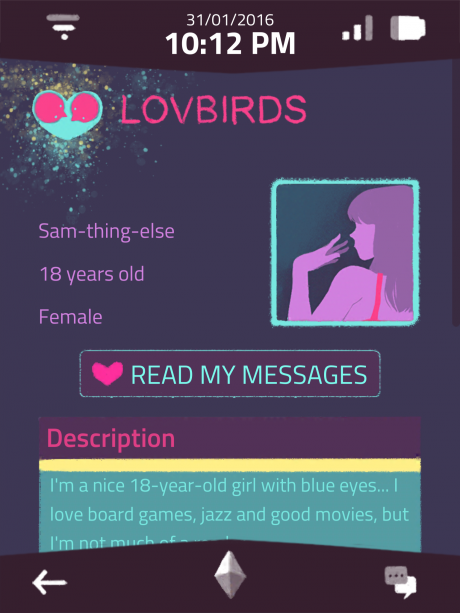 To move things on you’ll need to send a picture of you in a wig, which you can find on the forum that he linked. Click through to the VIP section and fail the password three times in order to trigger a password reset. 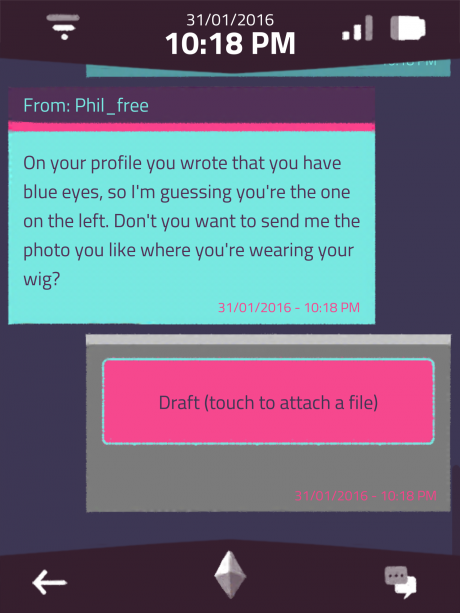 After entering this you’ll get an email with a new password so you can log in to the VIP section.

Here you’ll find a bunch of pictures of a festival Sam recently went to, you can download all of these by clicking them, but only one is essential - one of Sam, with blue eyes and a pride flag on her cheek. You can send this to Phil_free. 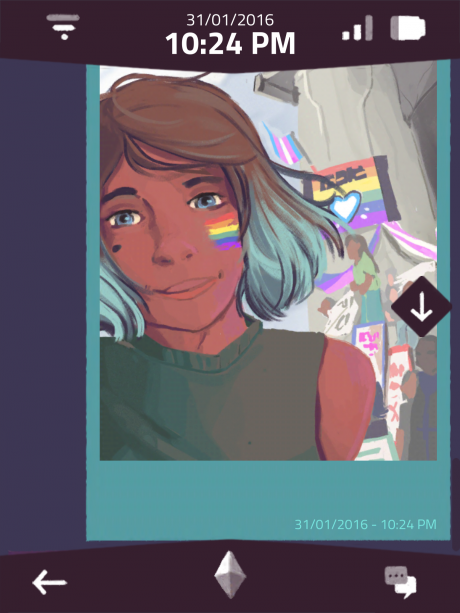 Phil_free mentions that the place the picture was taken was Covonia - he’s a bright one. You can look at the other cities section in the weather app to find Covonia’s zipcode, which you can then enter into the calculator, followed by =. 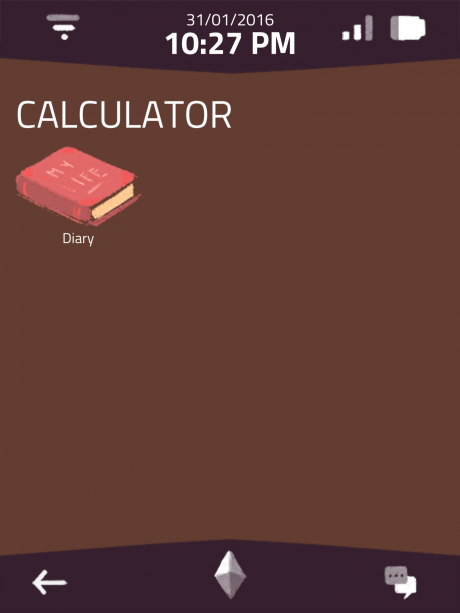 This will unlock a diary behind the calculator, which contains all of the truths Sam has hidden from so many people.

Once you get to the end, you’ll receive an email, which will strongly hint at wanting everything on the phone deleted. There’s an option for exactly that in the settings. 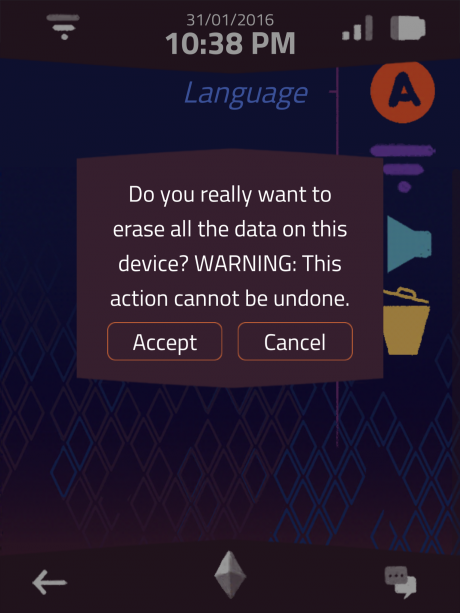