It's the kind of title journalists hate because we have to keep checking exactly how it's spelt when writing about it. If you're clever you come up with a little finger rhythm rule to help memorise it.

Anyway, with that little gripe out of the way we can get on to the meat of this appealing little puzzler hybrid. Fortunately, that dodgy name is probably the worst thing about it.

Following in a distinguished line of match-three puzzlers that graft-on RPG elements, 10000000 isn't quite up to Puzzle Quest 2's standard, but it's a noble effort nonetheless.

As in Infinite's gem, you have to match blocks in a grid in order to launch attacks and initiate manoeuvres in an RPG meta game. Here you're sliding whole horizontal and vertical rows of icons in order to form three or more of the same kind.

Match-up three or more swords and your little adventurer - whose progress through a typical dungeon is displayed above the puzzle grid - will launch an attack on the foe blocking his path. Match three or more keys and you'll be able to open that chest filled with loot.

You can also match resources like wood and stone in order to repair different rooms in your castle. These rooms allow you to purchase upgrades, such as a better sword or more powerful magic.

10000000's graphics adopt a retro pixel-art style, but they're done in a way that smacks of the path of least resistance rather than a skilful nod to the past. More crucially, we found the core block-matching controls to be a little sticky, creating frustration in such a time and accuracy-sensitive game.

Niggly faults - and stupid name - aside, 10000000 is an absorbing puzzle-RPG. It's not particularly inventive and it could use a heap more polish, but it'll keep a certain breed of iOS gamer transfixed for weeks. 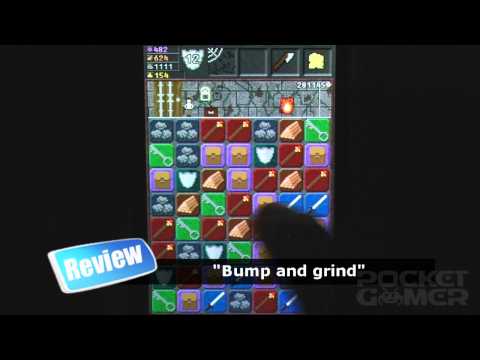 Getting your head around its name might be an epic quest in itself, but 10000000 is an enjoyable fusion of match-three and RPG
Next Up :
Roller Drama review: "Scheme with your team, skate great"