And here, ladies and gentlemen, we have what is certain to be a historical first: a game inspired by the Twitter 'Fail Whale' (the cheerful cephalopod that appears whenever Twitter is too busy to accept your business.)

ustwo's Whale Trail has a fashionable inspiration, and accompanying this is a frankly inspired title tune, composed and sung by Gruff Rhys from the Super Furry Animals. So where does it go from there?

The concept of Whale Trail is incredibly simple, and incredibly bonkers. Willow the Whale is trying to escape the clutches of Baron Von Barry, an evil black squid, so he takes to the skies. But to stay airborne and fuel his ascent he has to gobble and chase after a trail of colourful bubbles scattered through the sky.

Controls require you to do just one thing and do it well: repeatedly tap the screen to propel Willow upwards. Keep your finger pressed and he does loop-de-loops. Do nothing and he plummets to his doom. The goal is to survive for as long as you can and rack up points.

Ah, but there’s more in store for the unwary Willow: arrayed in opposition are banks of storm clouds - The Thunder Bros.

If he strays into their path, Willow gets a nasty electric shock and his fuel gauge is depleted. Worse, the score multiplier (which comes from continuously collecting bubbles with no mishaps) is dialled back.

Those pesky clouds don’t have it all their own way, though. If Willow can collect enough stars on his travels, he gets a temporary “frenzy” power-up and blows them apart like so much candy floss.

The flow of the action is continuous - collect bubbles, collect stars, dodge clouds - but the scenery changes through seven 'kingdoms of colour'. The beginning of a new stage is marked by the appearance of what can only be described as a benevolent floating head, emitting a train of bubbles to lure Willow onwards into its realm.

Gameplay longevity is teased out through a checklist of achievements, and an online Game Center leaderboard. We're not sure whether this in itself will keep you coming back from more, but ustwo has promised more levels and features in future updates.

Whale Trail isn't deep or meaningful, but it is a great deal of fun. The visual design and sound effects are adorably psychedelic, and in terms of aesthetics alone the game could easily take its place alongside hippy cultural touchstones like Yellow Submarine and The Magic Roundabout. 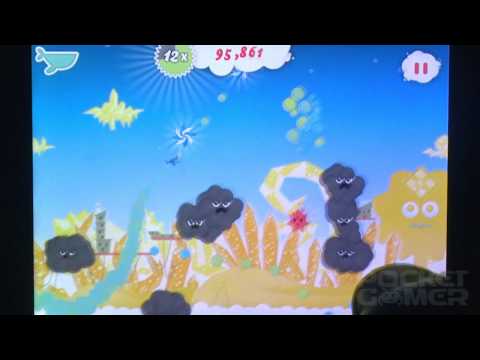 A charming confection that’s impossible not to like, with stellar production values and solid gameplay
Next Up :
UFO99 review - "A fun little arcade game on the go"