Westworld preview - What the Fallout Shelter devs did next

An over-the-shoulder look from GDC

There's nothing about the TV series Westworld that screams "family-friendly" – it's full of murder, dubious morality, and an endless procession of naked bodies for story purposes.

Yet the Westworld mobile game, developed by Fallout Shelter studio Behaviour Interactive, is attempting to take all that darkness and put it in a cutesy-looking management game.

From our hands-off preview at GDC, it looks like the shift in tone might actually work – and it looks a lot more involved than you might first assume.

Journey to the Westworld

The Westworld game frames itself as a training program for new employees at the fictional corporation Delos, giving you control over a smaller version of the park and tasking you with running it to the best of your ability.

To do so, you'll need to construct buildings for guests to hang out in, build hosts for them to engage with, and generally ensure everyone is having a good time.

There is a lot to dig into on just about every level, but your main area of focus will be the hosts, which come with a wealth of stats and upgrades to wrap your head around. 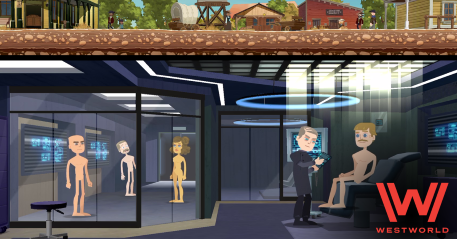 First off, you'll need to construct your hosts, though you don't have any control over who you get – it's random each time, so you might need to spend a fair few resources getting a decent spread of characters.

Each host has their own traits and abilities – some are romantic, some are gamblers, some are violent, and so on. They also have different affinities, such as black hat, white hat, or neutral, and a power level that can be upgraded with enough XP or boosted with certain bits of gear and equipment.

The key is to pair off the right hosts with the right guests to make sure each activity goes off smoothly, with tasks such as robbing banks, playing dice, and just straight up boning available across the map.

Match the right guest with the right host and you'll earn XP and other items. Get it wrong and your host is likely to get shot in the face and sent off for repairs, which isn't good for business.

Westworld of our own

Hosts can also start to glitch out if you overwork them, so you'll need to run a diagnostics interview on them at certain times while you play. This involves a strange, Reigns-esque minigame where you need to make the right choices to build up certain meters, while also taking into consideration the negative effects of your choices.

On top of all this, you need to upgrade your locations and buildings, and make sure that the operational side of things is kept up to date so you can keep upgrading your hosts. 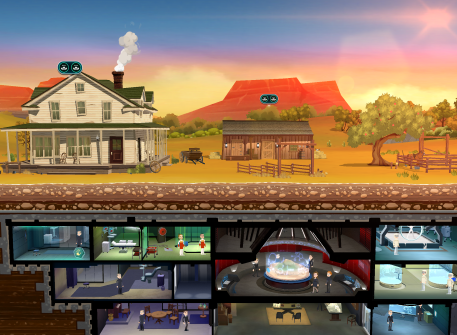 There's a bunch of different locations from the Westworld TV show to unlock and play around in, and there's a handful of characters that will make an appearance as you play.

And the game isn't afraid to go dark, either. While more mature elements aren't shown explicitly, Warner Bros promised us that the story surrounding the game will touch on some darker elements as it weaves its way between the first and second seasons of the show.

The whole Westworld in his hands

From initial impressions, Westworld looked like it was gearing up to be Fallout Shelter by a different name, but we can safely say that this isn't true.

It looks to have plenty of depth to keep you stuck in for many hours to come, and a bunch of different mechanics which suit the license pretty much perfectly.

We won't know for certain how good it is until we actually get our hands on it, of course. Westworld is already in soft launch, with a full release planned for April to coincide with the launch of season 2, so expect to hear more about it then.

Westworld is closing its doors on mobile from April 16th

You can now pre-register for the Westworld mobile game