And it's in spiffing 3D-vision

It looks like someone's been busy crafting a new Tony Hawk's game for mobile phones – specifically high-end ones capable of 3D graphics.

At least, that's the conclusion we're drawing from the YouTube video (below), which shows a J2ME game of Tony Hawk's Downhill Jam. It shows a skater blasting down a sloping road, leaping over ramps to a backdrop of attractive scenery.

The people at Project NeXt who posted the video, reckon it's been developed by Fishlabs, and will be published by Selatra. We'll be chasing official confirmation of that, obviously, but for now, feast your eyes on the visuals.

Oh, while remembering that the video has obviously been stretched horizontally before being published on YouTube, which is why it looks a bit strange: 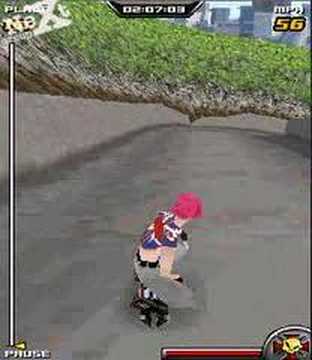 Subscribe to Pocket Gamer on
Next Up :
World of Tanks Blitz celebrates birthday bash with special rewards and a celebrity guest

Tony Hawk's not broken but Activision's going to fix him anyhow

Hands (and feet) on with Tony Hawk's Downhill Jam