How to set the clocks, do chemistry, and more

Til Morning's Light is the new game from WayForward and Amazon. And it's all about solving puzzles to escape from a spooky mansion.

As Erica Page you'll find keys, fiddle with clocks, dig up treasure, do chemistry, and smash snakes with crowbars.

And we'll help you every step of the way with our guide.

This walkthrough covers the first hour or so of the game. We'll add more soon. 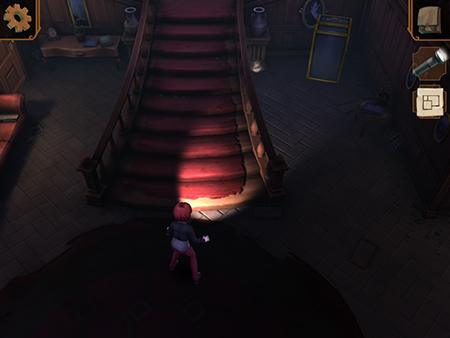 You start the game in the foyer. Wander around, trying to open the locked doors, until you hear a voice. A monster will spawn - run into it to get the first taste of the game's combat.

The downed critter will drop a key, which opens the door in the bottom left corner of this room. 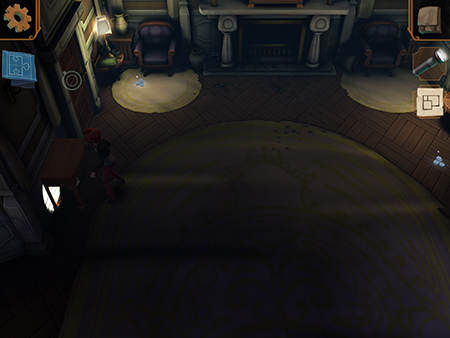 Now open the drawer, next to the door in the top right corner. Inside is a crank.

Use the crank on the three small clocks in this room (one on the left side, two on the right) to get three clock hands. Go to the main clock at the back of the room and use all three hands on the clock. 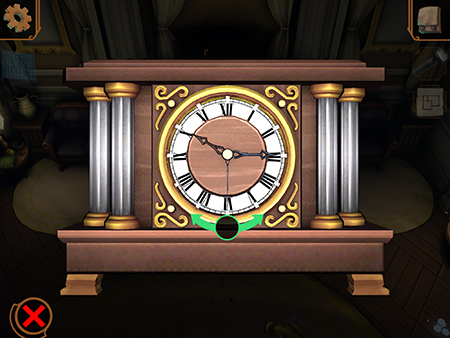 Set the time to 10:15:30, as shown in the screenshot above. A clockwork key will spit out. Grab it, then open the door on your left. 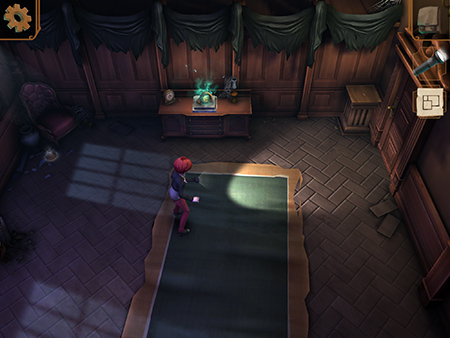 Wander to the north of this corridor. Grab the statue and then walk out the door on the right. 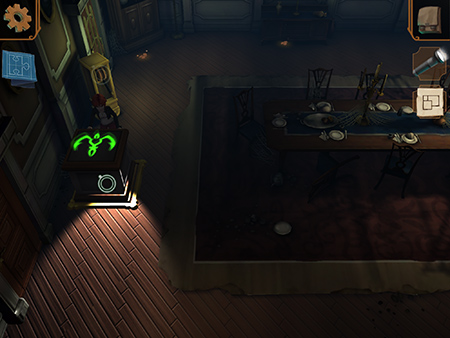 In this room, grab the journal entry off the central table. Then, pull the box and place it on the pressure plate on the left side of the room.

This make a lever appear. Pull it, then go through the door it just unlocked. 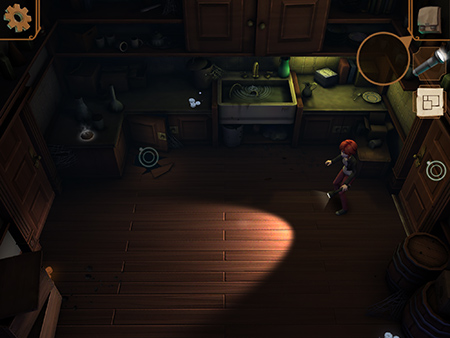 Pick up the carrot from the side. Investigate the hole in the floor and move the camera until you can see the onions. Tap on them, to pick them up.

Go through the door on the left. 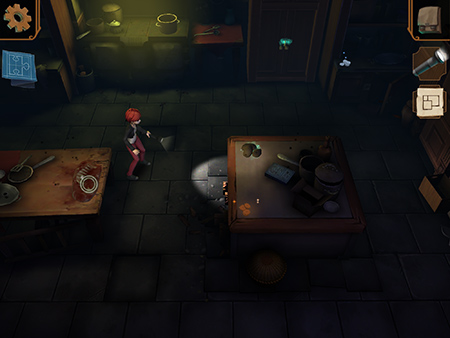 You're in the kitchen. Grab the plate, the potatoes, and the ingredients list. Then go through the right door. 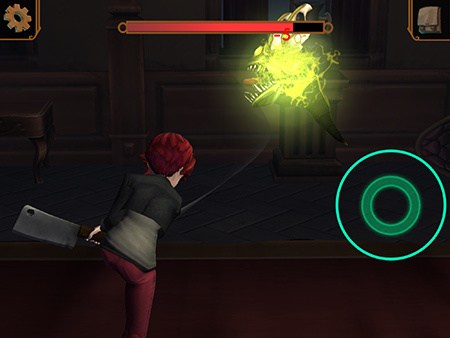 In the next room, take the butcher's knife from the side - it's a new weapon, and will also help solve a puzzle.

Also in this room, investigate the broken wooden wall opposite the gated door and crane the camera to get a crow's foot. Then use the lever to open the door and go through. 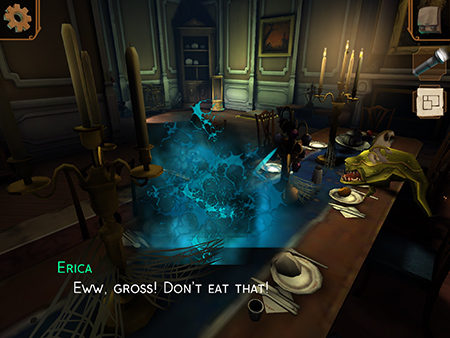 You'll be back in the room with the pressure plates, but this time two monsters will eat everything on the table. Kill the critters to get salt and pepper shakers. 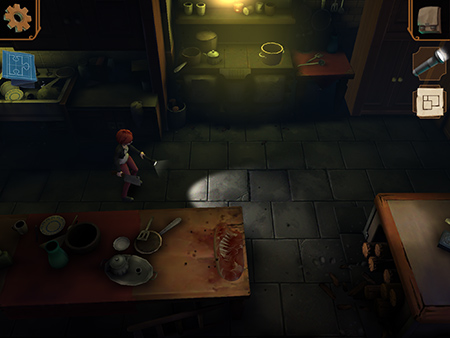 Return to the kitchen. You can now use the meat, as you have the cleaver.

Throw all the ingredients (crow's foot, carrot, potato, onion, salt, pepper, and meat) in the pot, then use the plate on the pot. You'll get a plate of stew.

Use the stew on the pantry to your right and you'll get a key for your trouble. Use it to exit through the door on your left.

You can go into the bathroom to grab the journal entry and have a look at the pipe if you want. The main reason for coming to this room is to look in the drawer in the top right corner, and grab the handle.

Kill the two monsters to unlock the gate.

Move the crate onto the other pressure plate. Then use the lever in the slot that appears. Tug that lever to unlock the chest, then grab the key from the chest. 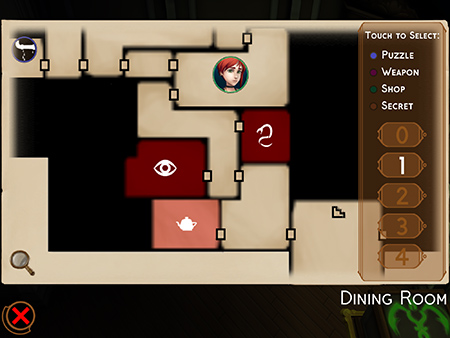 Consult your map to see that the teapot room is at the bottom the map. Head there now and unlock the door. 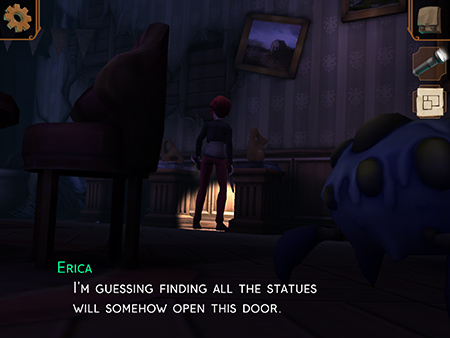 Place any statue onto the central podium. The gate will lock, and a creature will descend upon Erica. Bash its brains in, and take the eyeball key it drops. 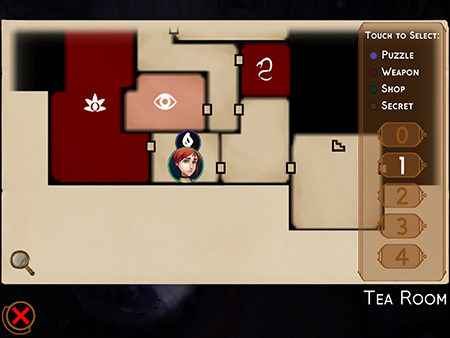 That opens a room a few doors away, as shown on the map. here. Go through the clock room and the corridor, and open the door. Watch the cutscene with the ghost kids. 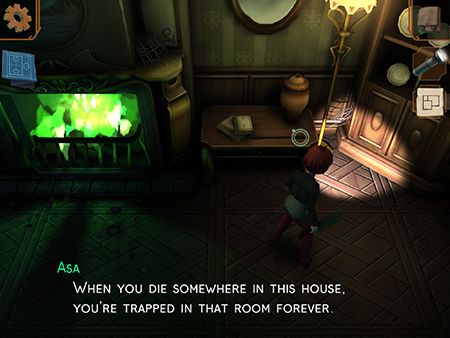 Pick up the fire poker, then look at the fireplace. You'll get a statue and a snake key. To the snake room! It's just across the way. 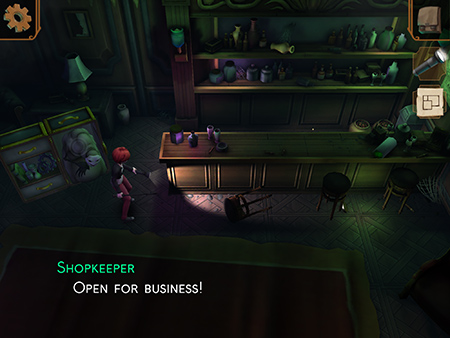 Inside is a shopkeeper (buy some items if you like) and a statue. Return to the statue room at the bottom of the map. (A handy blue statue icon will show you the way) 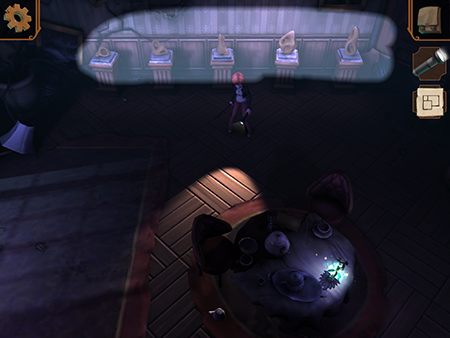 We need to put the statues in order of size, from smallest on the left to largest on the right. The screenshot above shows the correct layout. When you hit it, a key will appear on the table. Go grab it and unlock the door on your left. 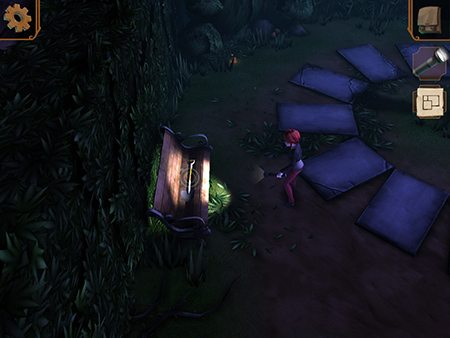 In the next room you can get a tutorial about hidden spirits, if you so desire. Or go through the door to get to the second garden. Grab the shovel from the bench on your left. 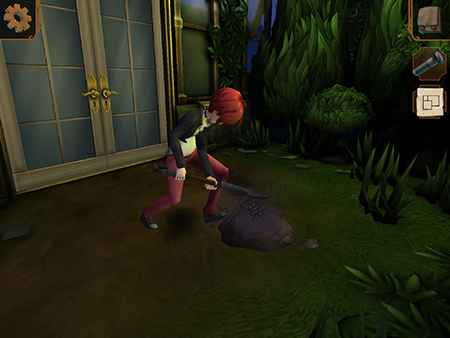 Dig up the ground here to get the chemistry key. Use it go inside the door here. 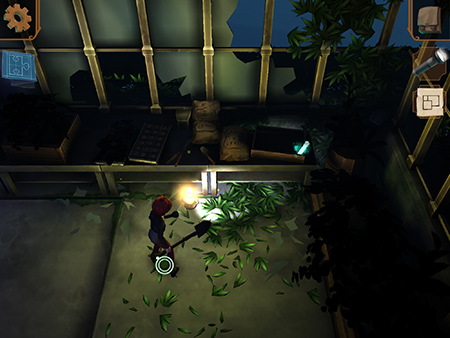 Inside, grab the three vials. There's one in the top right corner, one on the cabinet to the left, and one on the bench next to the chemistry set. 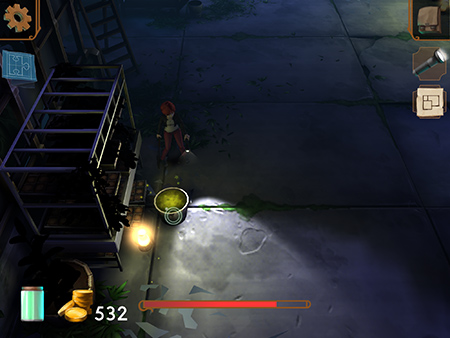 Now we need to fill the vials. Get some green gulch from the floor, some yellow liquid from the bucket in the bottom left corner, and a blue leaf from the plant.

Also, pick up a beaker from the left side of the room, and the instructions from near the chemistry set. 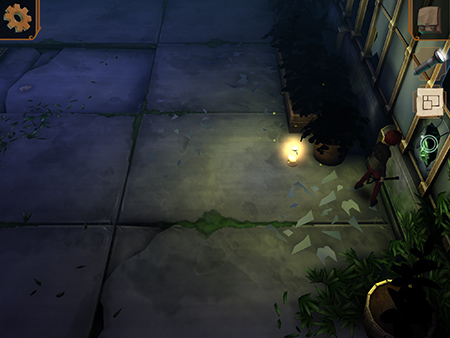 Finally, look through the hole in the glass here. Pick up the vial that's filled with rusty red water. 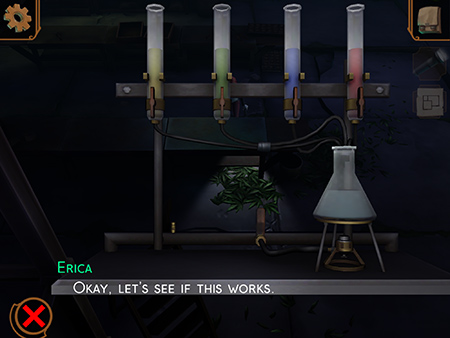 Use all four vials and the beaker on the chemistry set.

We now need to fill it with the four ingredients, based on the instructions you found earlier. The coloured numbers on the reverse side show how many times you need to add each ingredient to the beaker. 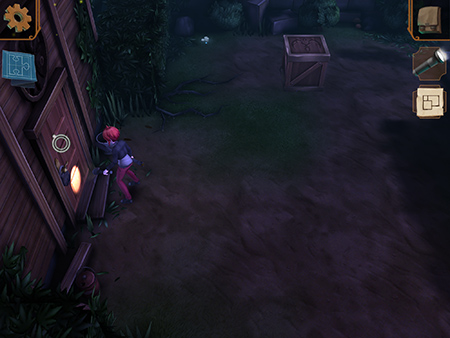 It's acid! Head out the door in the top left corner and then go use the acid on the door lock at the northern area of this garden. 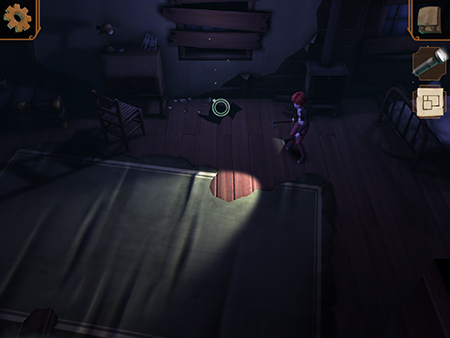 Inside, grab the crowbar. Then pry off the grate and crawl under. In the next room, look at the hole in the floor and get the pipe.

Unlock the door to the south and go through the door. You'll be in the corridor that leads to the bathroom, which is handy, as that's where we're going. 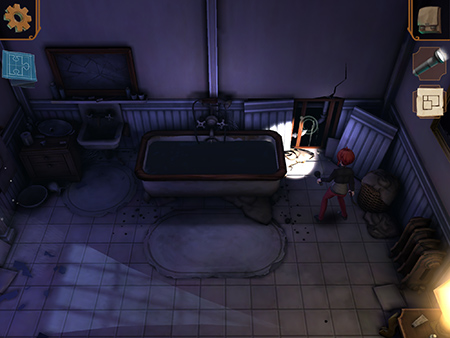 Use the pipe on the leaky pipe. Then beat the crap out of the snake to get a scroll.

Next Up :
Warpath best units divided by classes