TheOdd1sOut: Let's Bounce is a casual game from BBTV that's available now for both iOS and Android. It's centred around the life of the popular YouTuber James Rallison, or TheOdd1sOut and will see players trying to bounce their way through as much of it as possible.

It's a very simple game in concept then. Each level will see you bouncing your through the stage by landing on different people and objects. This will include people who featured prominently in Rallison's life such as James’ mom, laser tag Hunters, college roommates, to YouTube fans. The higher you bounce the more characters you'll meet. 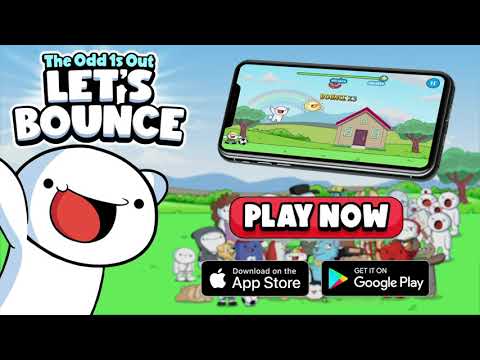 Along the way, players will also be able to collect all of the different Odd 1s. This includes the likes of Baby James, Sooubway James, Harry the Moth, the Furry and a whole host of others. All of which will likely mean something to you if you have an idea who James Rallison is, presumably. If you're unfamiliar, he's a YouTuber who creates storytime-style cartoons. His channel boasts over three billion views and 15.9 million subscribers. Fair to say, he's quite popular then.

Discussing the partnership, Shahrzad Rafati, Chairperson and CEO, BBTV said: “Today’s announcement is an excellent example of how the BBTV platform drives value to major influencers and content creators.”

They added: “We’re thrilled to partner with James and his incredibly popular Odd1sOut channel. We believe we have built an app that truly reflects James’ world and believe his loyal fans will love it. BBTV’s scaled reach and engaged audience allows for a unique competitive advantage given its ability to promote apps, with a low cost per install while achieving strong commercial results”.

TheOdd1sOut: Let's Bounce is available now over on the App Store and Google Play. It's a free-to-play game with in-app purchases.

Looking for more great mobile games? Here are 5 of the best that released for iOS and Android in October
Next Up :
Valiant Force 2, the sequel to the hit 2016 strategy RPG gacha, opens up pre-registration for Play Store users