The one time I dared to mix a trip to the theme park with a slice or two of something sickly, the guy sat in front of me on the big dipper got a rather nasty surprise about half way round.

Pudding Panic is a far more successful marriage of such thrills. Part ghost train, part dessert disaster, the game's primary focus is one of route-planning, and – even more crucially - your ability to alter routes at a moment's notice.

The idea is to chop and change the junctions on the track ahead as said pudding – dubbed Jitters – makes his way towards the exit.

As well as guiding Jitters to his goal you have to avoid a host of ghoulish baddies (witches, skeletons, and ghosts are just some of those on offer), all of which are also susceptible to any track changes you might make.

Pudding Panic doesn't given you free rein over its levels, however. While each and every major junction on the track can be manipulated – whether simply swapped for another junction or spun on its axis to change its priority – just what you can do to them is limited by the game itself.

The kind of junctions on offer are listed down the right of the screen, alongside a whole host of power-ups that enable you to fight the ogres that patrol the track around you.

What makes all this tricky is the fact that you have to both decide what path to take and defend yourself against the game's cast of characters as Jitters rolls on by.

As such, Pudding Panic relies on your ability to look ahead and make the necessary changes before Jitters misses his mark.

Your ability to react to enemies is also defined by the route you've taken up until that point. Each of the moves at your disposal – from scaring baddies off yourself to putting a bag over your head so you can glide on by unawares – can only be used when you have enough credit on board, either gained by picking up pink pellets that decorate the track or by successfully pulling off such moves in the first place.

When all the elements come together, Pudding Panic really does live up to its name, and stages that seem to be flying by without hitch can be brought crashing down to the ground within a matter of seconds.

But there's another level to all this that really sets Pudding Panic apart from your average puzzler, and that's the need to manipulate the routes of your enemy as well as your own.

As you progress, levels are increasingly split off, with portions of the track only unlocked once you've flicked a switch or two or scared off a witch carrying a key. Such tricks will often need to be pulled off on parts of the track Jitters can't yet access, meaning you have to use one enemy to scare off another.

Bringing rivals together in such a way requires rather more prudence than called for during the rest of play, and nicely offsets Pudding Panic's bulk, where finding yourself with a second or two to spare is a rarity indeed.

More importantly, however, it's evidence of the level of depth that Pudding Panic has at its core. The setting is utterly barmy, and the intensity of play rivals anything else seen on iPhone, but what really makes Pudding Panic the kind of sticky treat that's hard to put down is the frighteningly high quality of the level design. 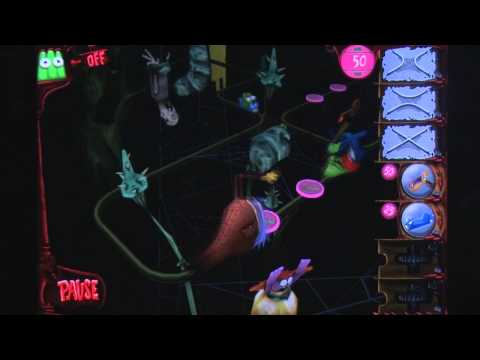 Utterly intense, but ridiculously addictive at the same time, Pudding Panic's marriage of fear and food delivers a puzzler without comparison on iPhone
Next Up :
Jade Order review - "An puzzling path of the warrior"