As a general rule of thumb, a journalist should declare any involvement with a game's development. You know, to avoid any accusations of bias or dishonesty, and all that.

So, I'll make it clear upfront: I have a starring role in Tearaway.

My grinning face peers out of a hole in this pop-up world, and the paper-craft inhabitants treat me like a god. My photo is on album sleeves and tiny picture frames, and it's my stubby fingers that poke through the floor to move platforms and tickle enemies.

Okay, so I didn't actually do a deal with Guildford-based developer Media Molecule - best known for woolly do-it-yourself platformer LittleBigPlanet. My grinning mug is, in fact, streamed from the Vita's front-facing camera.

And I imagine that it will actually be you who stars as the inter-dimensional deity of your Tearaway adventure, and not me. Because that would be weird and I don't remember signing any contracts to that effect. 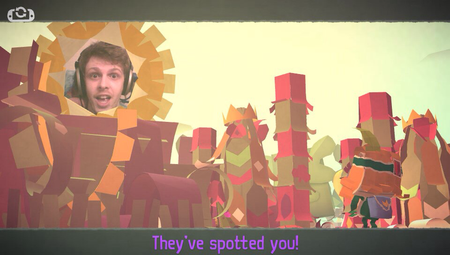 It's not just your fizzog, of course. You also interact with touch. Anything with a fingerprint - like big curly strips of paper and bows on Birthday presents and ribbons that hold cardboard doors shut - can be tugged on with the touchscreen.

And anything patterned with the iconic PlayStation symbols - like grease paper floors and drum skins - can be poked from underneath by feeling up your Vita's touch-sensitive backside.

In fact, your ability to toy with this paper world is felt everywhere. Characters will ask you to design things like mustaches and pumpkins and mittens. You'll then bust open an impromptu Art Attack studio, cut out bits of coloured paper, toss away the scraps, and bring your creations into the gameworld. 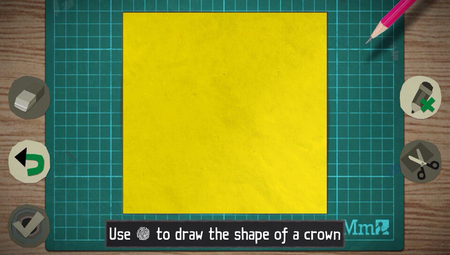 You'll also plop stickers on flags, squish enemies with a prod, record short voice clips to invent sound effects, take photos, print your living room wallpaper on the skin of an elk, and poke random bits of scenery just to see what happens.

This link from the real world to Tearaway is also a two-way street. If you rescue certain creatures and plants in the gameworld, you're invited to print them out as cute papercraft models.

You play an enormous role in Tearaway, then. But you are not the only hero. There's also Atoi (or Iota, if you play as a boy), with her spindly paper legs, envelope head, and floppy ginger hair. 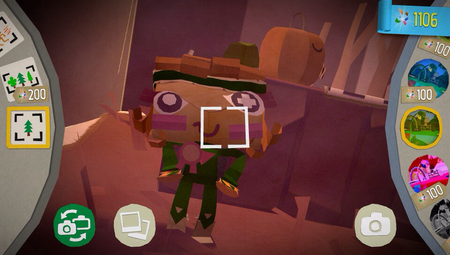 After Grand Theft Auto V and The Legend of Zelda: The Wind Waker HD, Tearaway is the third major game this year that lets you take selfies

When you're not poking your fingers through the Vita and dressing up a pig with stickers, Tearaway is a far more traditional platformer with the usual contingent of jumping puzzles, a little combat, and some kleptomaniac collecting.

Media Molecule has, thankfully, figured out how to make a platformer feel right after the floaty, ungainly movement of LittleBigPlanet. But it not exactly Mario, and it's not too challenging - the focus is more on exploration and discovery than perfect jumps.

What Tearaway is, though, is endlessly creative, super-imaginative, and triumphantly uncynical. The game's pop-up world, which is fashioned from folded up cardboard and brightly coloured paper and strips of tissue, is warm and inviting, and you want to see what lies around the next corner. 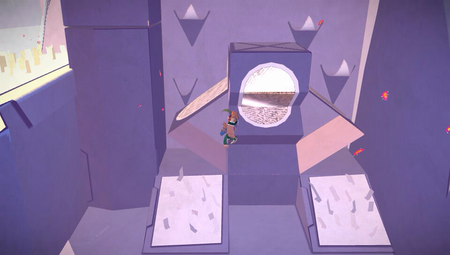 Maybe it's a squirrel who needs you to make him a crown. Or a treacherous climb up a snowy mountain, with ancient structures that fold away at their creased seams. Or a madcap pig-back ride through a valley. Who knows?

Tearaway is quite simple and straightforward, so if you're looking for tricky puzzles or tough boss fights you should shop elsewhere. But if you want something playful, inventive, fresh, charming, and completely original on your Vita, you need to get Tearaway when it comes out on November 22nd.

Unfolding story: The making of Tearaway