Star Wars: Force Arena review - A MOBA from a galaxy far, far away

Star Wars: Force Arena sits somewhere between the simplicity of Clash Royale and the more in-depth mobile MOBAs like Vainglory.

And unlike a lot of Star Wars games, it's not shy about letting you get your hands on the big names. You'll have Luke Skywalker from the get-go, with Leia, Han Solo, and some other famous names not far behind.

It all squishes together to make what's probably the best Star Wars mobile game in recent memory. And an experience that you're going to end up losing a lot of time to.

The core of the game is a pretty standard MOBA. You're in control of one hero and a bunch of units, so is your opponent. You need to defend your towers while simultaneously smashing those of your foe.

But you deploy units with a Clash Royale-style card system. Each unit has a points cost. And you've got a regenerating bar of energy that you can spend on them. 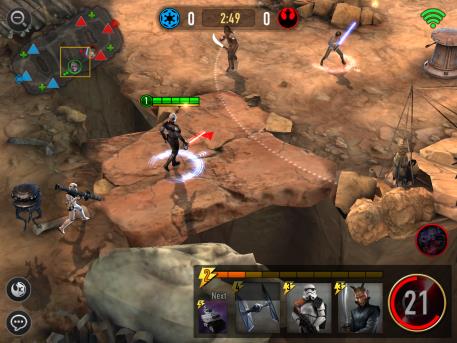 You'll unlock new cards as you play, and you can add these to your deck. You can use double cards to upgrade your units, just like in Clash Royale.

The battles last three minutes, and there's a sudden-death scrap when you're tied when the minutes have ticked down.

And it all leads to some excellent, frantic battling. You're levelling up your characters, unlocking new card packs, and working your way through the ranks to fight tougher and tougher opponents. 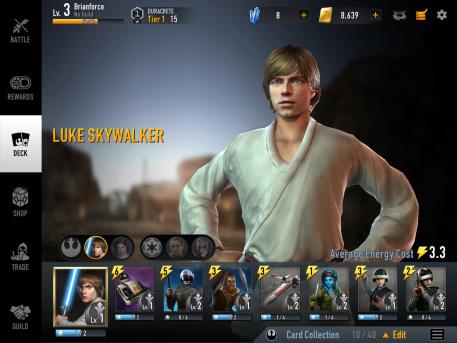 Your heroes have special moves that are on a recharge, and using them can turn the tide of a tough scrap. But you're going to have to put the time in if you want to be competitive.

It's pretty likely that you will. The progression is weighted in your favour in such a way that you'll be gaining more and more as you play.

Things do get a little bit grindy, and the slow rate of your card pack unlocks mean you'll often find yourself rolling down the leagues before you get a chance to upgrade.

But this is still a great MOBA, really well designed for mobile play. And it's full to the brim with iconic Star Wars characters. What's not to like about that?

Star Wars: Force Arena review - A MOBA from a galaxy far, far away

A solid MOBA brought to life by some excellent use of the Star Wars license
Next Up :
Catalyst Black review - "Gorgeous visuals, smooth gameplay and fun-filled fights"