Shift 2: Unleashed is exactly what you’d expect from a sequel.

It's bigger, it's better, it has more content, more cars, and more graphical doolaleys than you can shake a gearstick at.

It doesn't quite do enough to push it into the realms of the Platinum Award - which is reserved for games that go beyond the call of duty (sorry, EA, it's a common phrase) - but, equally, it would take a blackened heart to not appreciate the quality of this racer.

As with the first Shift (and 99 per cent of all racing games), you start off with a fairly normal car like a Renault Megane and have to work your way up five different classes by winning events and earning cash.

Events range from traditional races and time trials to drift competitions and sprints. Some hand you a car to take for a spin, while others rely on you bringing your own vehicle(s) to the track. Naturally, each subsequent race gets harder, meaning that some careful tuning of your car is required to keep up with the competition.

The key word there is 'careful', as unlike other racers Shift 2 subtly punishes you should you get a little too over-anxious to 'trick out' your car to an easy win.

Every new car class requires a fair dollop of cash to purchase the required vehicle, which means those who overspend will find themselves either having to use real money to top it up, or replaying past victories.

It's far more fun racing against equally fast cars in any case, especially with Shift 2's new crunching collision effects that can leave your driver dazed for a brief second and the windscreen shattered.

The handling hasn't changed much since the previous game, which is no bad thing seeing as Shift was one of the best racers in the first place. There's still the option of using manual gears (sweeping your finger up or down to 'shift') and copious driver assists that any self-respecting racing fan should disable immediately.

However, there's also now the option of manual acceleration (which is tricky when you're also using manual gears) and a much-needed drift icon that appears when the back-end loses traction.

Alas, trying to keep the drift going is still a dark art, and one of the few elements that feels a little undeveloped since the first game.

Everything else, on the other hand, is bigger and better.

The single-player career mode, for instance, still retains its clever star system that rewards both fast driving and a selection of other criteria (driver points earned, drift etc) for each stage, but now there's a lot more freedom as to what races to drive next, and more variety to the locations.

The graphics have been spruced up, too, with some great blurring effects when hitting the nitros, the aforementioned crunching collisions, and well-detailed car models. The shuddering steering wheel as your car tears along the track is something that more games should try to recreate, too.

On the disappointing side are the multiplayer options, with head-to-head races still limited to local connection. Another slight annoyance is the presence of Origin for leaderboards and special competitions.

It's not a bad system (when the servers are working, which seemed to be not very often) but having to manually re-populate your friends list for the umpteenth time is a hassle.

In terms of single-player experience, however, Shift 2: Unleashed takes the original game and puts it into top gear, ending up as easily one of the best racers on iOS. 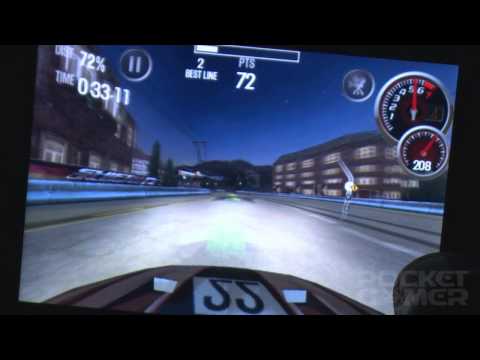 Shift 2: Unleashed is bigger and better than its predecessor, with a lot more variety of races and excellent single-player career mode
Next Up :
Pawnbarian review - "A minimalist roguelike that's hard to put down'"

Shift 2: Unleashed for iPhone and iPad updated with 10 new events, HDMI-out, and more

Shift 2: Unleashed for iPhone and Madden 12 for iPhone, iPad, and Android out in August