Never, in any of Scribblenauts Remix's 50-odd stages, will you need to spawn a giant rainbow beaver. Or a shy, fire-breathing, winged hamster. Or Tom Jones, riding a tiny helicopter made of ice.

This bonkers DS import lets you type just about any word - as long as its not copyrighted, vulgar, or massively obscure - into a text box and watch it magic into existence.

Developer 5th Cell evidently devoured dictionaries and Wikipedia lists, making tiny 2D facsimiles of just about every noun in existence - from bacon to badger - and they all come complete with individual attributes and personalities. You can add adjectives, too, to ensure that your dinghy is red or your bridge is sopping wet.

Scribblenauts gives you free rein to try out these impossible creations and implausible deathmatches in its sandbox title screen. This creative extracurricular start menu imposes no rules or boundaries, and lets you find out exactly who would in a fight between God and Cthulhu. It lets you truly test the depths of its dictionary, and lets you put a hat on a giraffe.

Sadly, such a staggering database of things is resolutely squandered in the game's lifeless series of braindead challenges. What use is the ability to create a royal rumble starring a tyrannosaurus rex and a zombified monkey when your task is to type in five objects that would probably be in a town.

It's preschool stuff, and often illogical, as you painfully prod words into the text box until you finally stumble on the exact handful of nouns that the level designer was dreaming up when he made the stage in question. The levels are crushingly uninspiring, painfully cryptic, and, more often than not, just plain dumb.

Every now and again the game gives you a more suitable challenge - cross shark infested waters, deliver treasure to a pirate, cause the extinction of the dinosaurs without weapons or asteroids - and it's here that your imagination can be tapped.

It's not about finding the right tool for the job - it's about magicking in the first object you think of and seeing if it will work. It's about being outlandish, abstract, and creative.

You could drop a toaster into the sea to electrocute the sharks, or unleash a prehistoric ichthyosaur to gobble up the over-sized guppies. You can lasso the treasure and transport it on a UFO, or tie it to a balloon and ferry it across with a fan on a giant stepladder.

You can unleash a matter-sucking blackhole to do in the dinos, or take your cue from the bible and spawn in God to sort them all out.

It's in these stages that Scribblenauts lets you exploit your rarely-used childlike imagination to solve puzzles in pointlessly time-consuming, but workable, ways. But those moments are few and far between.

Remix nabs 40 stages from DS original Scribblenauts and its so-called Super sequel, but for some reason it takes more of the dull, cryptic puzzle levels from the latter and fewer of the action stages from the former. The iOS-exclusive stages don't inspire much awe, either.

It also drops one of the best ideas from the first games, where you could replay levels but were banned from using the same words as before.

To get those bonus points you couldn't rely on easy tools like ropes, ladders, and helicopters - you were truly forced to think outside the box. That entire system has gone. It's down to you to challenge your own creativity, this time.

Thankfully, another less attractive feature of Scribblenauts is absent: its dodgy controls. Thanks to some streamlined ideas, the larger screens of the iPhone and iPad, and an overall revamp of the way chicken-headed protagonist Maxwell moves, you'll spend far less time accidentally swanning off into a pool of lava.

But, despite being given a third stab at the concept, the well-meaning creator has just never solved Scribblenauts's most basic hurdle. How can you give a player an unlimited resource of things and bits and bobs and doodads and narwhals and whales, while creating levels that stretch the imagination without veering off into illogical word-hunting?

It leaves Scribblenauts Remix in much the same state it was in on DS: an unimaginably cool gimmick that's well worth the price of admission - especially at its budget App Store price - just to see what it's capable of. Or to watch a monkey drive a truck. But the game can't offer challenges that inspire you to delve into its bursting thingiverse.

Oh, and the time machine doesn't work. What's up with that? 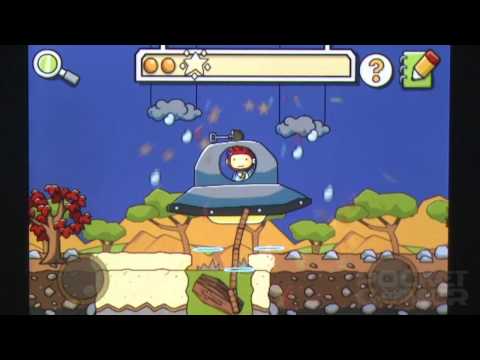 It's one of the most creative and ambitious ideas to hit the world of games, but being able to magic up a fire-breathing giraffe counts for little when the included puzzles are often so cryptic and dull
Next Up :
Happy Game review: "Don't worry, be happy?"

5th Cell's imaginative Scribblenauts Remix puzzler for iPhone and iPad gets a Christmas price drop, down to 69p/99c