Punch Club is a game about drinking, fighting, and getting mugged because you're sleepy

Instead it's a game about making a boxer the best boxer in the world. I think the boxer can kick people as well, which I'm pretty sure isn't allowed in boxing. So maybe he's just some sort of fighter.

It's a simulation though, so you're not tapping buttons to make your boxy fighter man hit other boxy fighter men in their genitals, instead you're controlling his life.

Get hungry, eat some meat. Get weak, go get some mad gains at the gym. Get sad, go and punch people in the face. Get sleepy, go for a sleep.

It's a juggling act. You need to earn money, but to start off with your fighting-ness isn't good enough to make a living from. So you take a job. But that eats up your time, and makes you depressed. Because jobs are depressing. 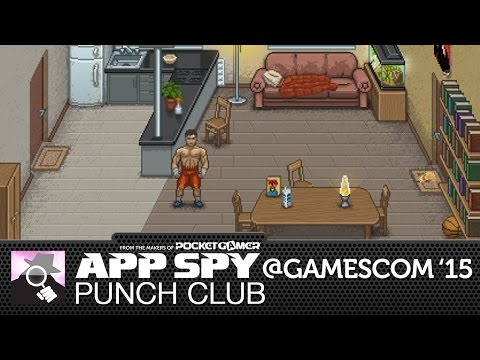 You need to train up as well, to make your arms big enough to do excellent hitting. But you have to pay the gym, and then you'll get tired so you'll have to have a nap. But if you're hungry you'll need to go to the shops.

Mike Rose from TinyBuild tells me that he had a great plan to earn a load of money, buy some of his own gym equipment, and then not have to waste time or cash travelling to the gym to train.

But then he got really tired and sad and someone beat him up in the street and stole all of his money.
This was in the game by the way, not in real life.

The game has a lovely art style. It's all blocky pixels and chunky menus. The touch controls work great as well because you're just tapping and swiping.

As well as the sim bits, you've got skill trees to build up. You can use the punching and kicking powers you learn in the scraps, but they cost energy, and if you do it wrong you'll get tired and a ginger man with a mullet and a beard will kick the living crap out of you.

Punch Club looks set to be a wonderfully deep strategy game about a punchy man. It's like Motorsport Manager, but with extreme violence instead of corners. And gloves instead of wheels.

I like it. And if you've read what I've written and think that you might like it, you should buy it when it comes out later in the year.