E3 2016: Lifespeed aims to give you that much needed F-Zero fix on 3DS

With a dash of Pilotwings and Star Wars for good measure 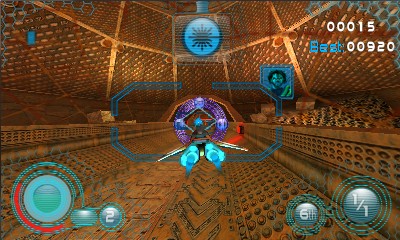 Nintendo may be turning a blind eye to those demanding a new F-Zero title, but the indie scene certainly isn’t - first via Fast Racing Neo for the Wii U, and now with the upcoming Lifespeed for the 3DS.

We played an all but final build of the latter at E3 last week, and the budget downloadable eShop release certainly appears capable of filling the futuristic racer-sized gap in the handheld’s library - even though its inspirations are far from obvious.

Instead of F-Zero or Wipeout influencing the game’s design, it’s actually Pilotwings's ring stages and the tight space battles from Star Wars that have helped shape the title. That’s according to the title’s main developer, John Owens, who’s development history includes I-Ninja and, er, Catwoman. Anyway.

There’s certainly a Pilotwings feel to the game with the way you have to fly through rings to speed up – but the influence is also evident in the reduced speed of the game compared to other futuristic racers. 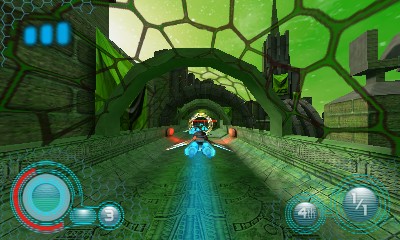 Admittedly, I played the game on the easiest difficulty setting (of which there are four), but this feels a lot easier to control than titles such as Wipeout - helped no end by the fact that acceleration is completely automated.

This control choice initially seems a strange one, but makes sense when you actually play the game. It allows you to focus purely on making it through the largely narrow tracks which have several obstacles to avoid (such as moving laser walls of death).

It also makes it easier to use the range of weapons (which you get by flying though specific rings). These include missiles you can fire forwards as well as aim at racers behind you.

There are also two control schemes: button or accelerometer. I was unaware that the game was set to the latter on my first play-through, and subsequently looked like a right berk as I smashed into everything in my path. The pitying faces of the watching developers is something that still haunts me. 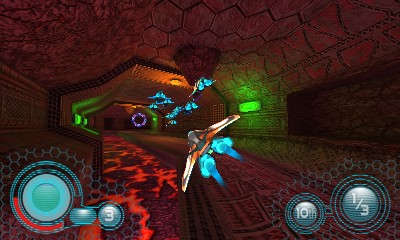 Considering it only has eight tracks, it won't take you too long to see everything this game has to offer. Though it's worth noting that there's also a story mode told via some impressively detailed cutscenes.

There are also four difficulty settings, and during our meeting Owens himself only just finished third on the second hardest difficulty - so that gives you some indication of the level of challenge that might exist here for more hardcore players.

One major disappointment is that there won’t be a multiplayer mode, although there will be online leaderboards. For a budget eShop release developed almost solely by one man that's not too bad.

Lifespeed may not be a perfect game, or even a great one, but it could well be worth a look if you’re looking for some budget racing thrills when it releases in August. It will cost $8, but the European price is yet to be confirmed.
Next Up :
Figure Fantasy: What to expect from the epic Ultraman Tiga collab