There's something about a creature with tentacles that tugs at an ancient, almost subconscious fear in us dumb apes.

When you see what the swinging, clinging creature in Ocmo does to its mammalian prey, you won't know whether to laugh or shiver.

Mostly, though, you'll spend your time with Ocmo switching between being slightly angry and rather impressed.

Into the swing of things

This is a physics-based platformer in which you press and hold in a direction to make your tentacled creature move and tap to jump. Most of your time, however, will be spent swinging between surfaces.

Tapping in a direction while airborne will shoot out a tentacle. If there's a solid piece of wall or ceiling within range, Ocmo will attach and swing from it. Tap twice to disengage and re-engage with another piece of scenery, and you have yourself a powerfully precarious movement system. 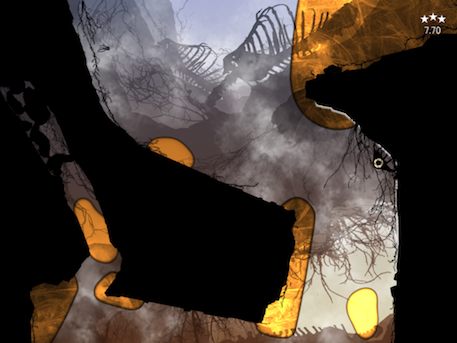 Though this isn't the first game to adopt such a system, it still feels alien the first few times you use it. There's quite a learning curve here, with a real sense of weight and inertia to Ocmo that will initially get you killed repeatedly.

Once it starts to click, though, Ocmo reveals itself to be deeply tactile and rewarding.

Not that you'll ever really stop dying. This is one tough cookie, and a mile away from most other mobile-focused platformers that shoot for accessibility.

At first you'll be proud just to complete a clean run through a level - which finishes with Ocmo bloodily devouring a cute bunny. But then you'll notice you've been awarded a mere one star out of three for your efforts, at which point the game's true hardcore chops will become abundantly clear. 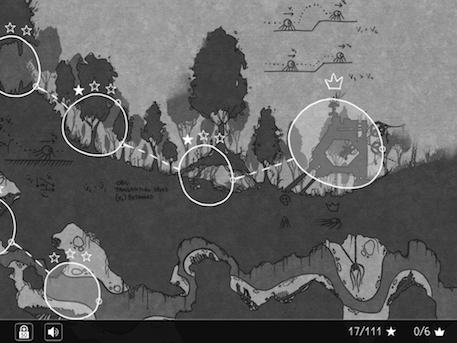 Mostly that's fine. If you're the type who will obsess over levels until you've rinsed them, Ocmo has plenty to reward you with.

But there are a few occasions where that hardcore sensibility rubs up against the inherent limitations of touch control - where a definite screen press doesn't quite register or a jump gets muddled with a run - and you'll end up cursing the game, not your own abilities.

It's a lot easier to forgive these rages when a game looks as handsome as this. There's nothing massively fresh about the silhouette art style that's used here, but the painterly level map system is truly a sight to behold, offering subtle tips and clues as well as eye candy.

Ocmo shows an admirable level of ambition, in its own ornery way.

It's structured like a casual mobile platformer, but the developer wants to push that concept to its limits in order to extract a genuinely fresh and challenging experience.

Occasionally that hardcore commitment gets in the way of the fun, but most of the time Ocmo is a tough and tactile delight.

A seriously tough but tactile physics platformer that will delight and frustrate in almost equal measure
Next Up :
Evony: The King's Return review

Ocmo is a stylish platformer for iOS