I have no doubt that to a certain kind of person, Noded's trickier puzzles will be minimalist puzzle perfection. Though I can appreciate much of what's on offer here, I am not one of those people.

The initial sense of calm and serenity that accompanied my early minutes with the game swiftly descended into a frustrated bout of trial-and-error, with lots of impatient screen stabbing.

It calls to mind those logic questions you get during weird job interviews - the kind that painfully remind you of your intellectual shortcomings, with only a pitiful "I'm more of a word person," offered in your defence. Just me?

The thing is, I have a nagging sense that Noded could be just a little more helpful to dimwits like me.

Things start off gently enough. You're introduced to concept of linked nodes, each of which is joined by a black line.

Tap these nodes and they'll shift in relation to the others that they're attached to - so if you tap the middle node in a peak shape, it'll flip down and become a 'V'. 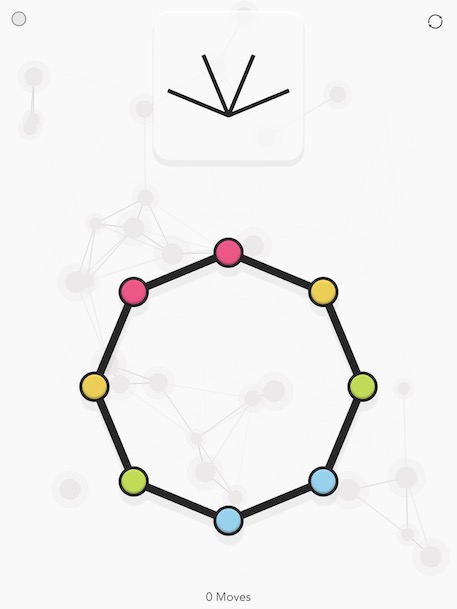 Shape and colour plays a part too. Shift a hexagonal node, and it'll have a knock-on effect for any circular nodes of the same colour.

It's a neat system to play around with during the simple early puzzles, as you strive to manipulate the nodes to form simple shapes.

But it just seems a little too vague and ill-defined for the trickier puzzles that show up after the first dozen or so.

Probably node the puzzler you're looking for

As soon as the puzzles required multiple criss-crossing manoeuvres, I found that I lost the thread.

Maybe I lack the spatial imagination (possible) and patience (probable) to see them through, but it never felt like the game was offering me enough to work with. 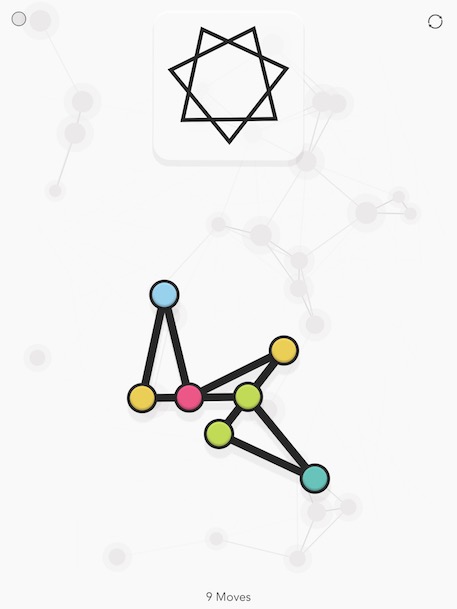 There's a preview feature that lets you see each individual move before committing, but that's not much use when you need to see several moves ahead before you can really form a strategy. Particularly when it's not always crystal clear how the nodes are going to react.

If you could head off and try another puzzle and come back later that would offer a considerable release, but you can't.

You need to tackle each puzzle in turn, and only once you've solved the first 15 will the next pack unlock.

And so, if you're like me, you'll find yourself resorting to trial and error. Even then, there's no back-up option for you to retrace your steps and try something new - only a total restart.

It's a shame, because Noded has the kind of simple, elegant presentation and novel premise that would normally attract me to a puzzler. I love Yankai's Peak for these very reasons.

But Noded's vague and esoteric core mechanic just doesn't seem capable of bringing enough people along for the ride.

A novel, well-presented puzzle with a core mechanic that's simply too vague and unforgiving for the average player
Next Up :
Pawnbarian review - "A minimalist roguelike that's hard to put down'"