August has kicked off with a bang. There's no huge hotly anticipated game on the cards, but there is a huge number of small little gems.

So, let's take a look at the mobile games most worthy of our note, then, shall we?

Watch the video, then read on for prices, pretty pictures, and App Store links. 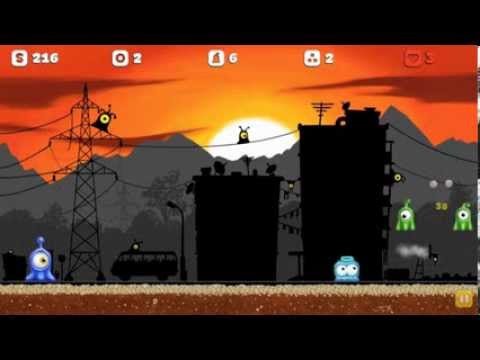 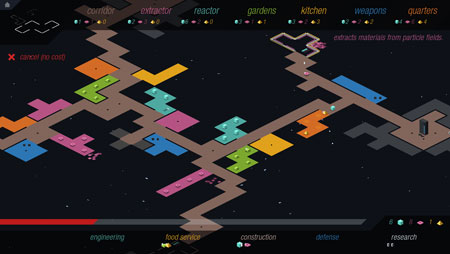 It might not look like it with its economical graphics and simple Tetris-block rooms, but Rymdkapsel is one of the smartest and sharpest real-time strategy games around.

Your mission is to build corridors to reach ancient monoliths, but you'll also need to make reactors and extractors and gardens and kitchens to produce resources. Oh, and you'll also have to produce quarters to make more minions, and weapon rooms to fend off incoming enemies.

It might sound complicated, but it's not. Everything's smartly colour-coded, so you can scan over your little factory floor and immediately know what's happening. And the rules are so simple, you'll pick it up in no time.

This is a wonderful game, with a great indie vibe. Best of all, it works perfectly on touchscreen. If you missed it on PlayStation Mobile, don't let it pass you by again. 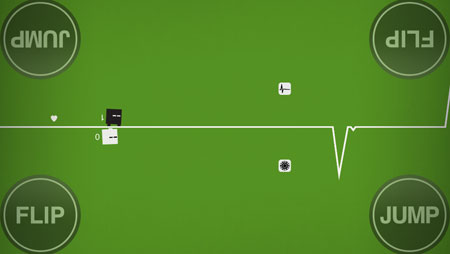 Lub vs Dub is almost identical to Flip Runner!, which we reviewed a few weeks ago. Both games are endless-runners where you swap between running on top of or below a central line to avoid big spiky enemies.

Thankfully, Lub vs Dub is a far better game than that other one I just mentioned. It runs at a much faster pace; feels more satisfying to play; and the white and red art style looks superb.

This game also has single-screen multiplayer, where two players battle for high scores on the same device. It's manic fun as you grab power-ups and play through special rule-fiddling waves. And it's very cosy, especially on the ultra-intimate 4-inch display of an iPhone 5. 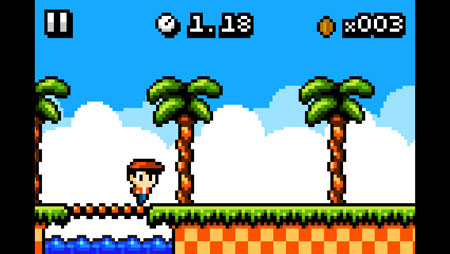 One the one had, it's a super-old school platformer, with chunky pixel-art graphics, a low-fi chiptune soundtrack, and a soaring difficulty curve. If you only saw the screenshots, you'd think it was a Master System game or something.

But this is an iOS game, so, naturally, it's an auto-runner. Little Tripp runs all by him himself, leaving you to concentrate on the tricky matter of jumping over erupting volcanos, running, and lobbing rocks at rats.

It is alarmingly difficult. Sometimes, unfairly so. Sometimes, throw-your-iPhone-in-the-ocean so. But it's always remarkably satisfying when you pull off a perfect run and finish the stage. Fans of retro games should give it a go. 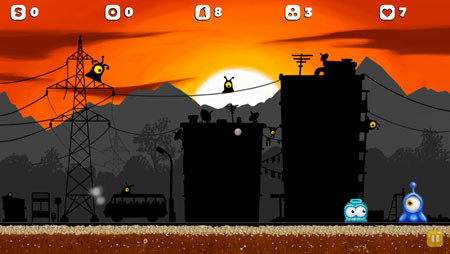 Eyes Attack is a funny little game about killing aliens, stealing their eyes, and using those peepers as projectiles. It's an odd one, that's for sure.

The controls are also odd. You tilt your phone left and right to move, and tap to fire an eye. The trajectory of the eye is based on how fast you're moving when you fire. This makes the very tricky control scheme tough to master.

There are lots of power-ups, loads of levels, and oodles of different monsters to murder. I've largely lost interest after a few early stages, but it's not bad. 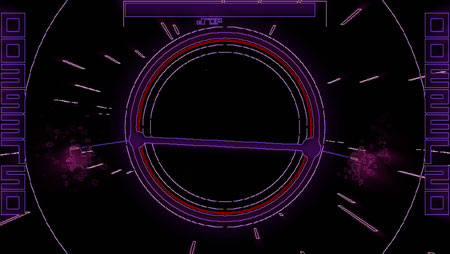 Dropchord is a new rhythm game that's published by Double Fine. It was originally made for a Kinect-like motion-tracking gizmo called Leap Motion. But it has also appeared on other platforms, including iOS.

The idea is that you place your thumbs on either side of a circle to make a line that strikes through the shape. Then, you'll move this line about to collect dots and avoid spiky red enemies.

It has fantastic music, and the ever-changing backdrops look like the most gorgeous acid trip on which you'll ever go. But the actual gameplay is not so great. It's finicky and repetitive, and rarely bears any relation to the music. I say just buy the soundtrack on Bandcamp. 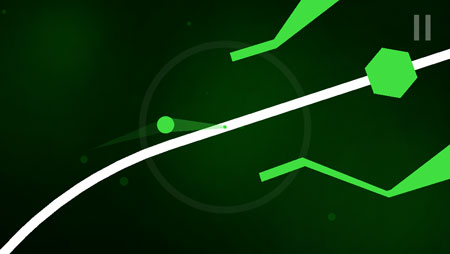 Pivvot's creator is the latest designer to be inspired by Super Hexagon and the like. The game is simple to play, the art style is minimal, and the ruthless difficulty will leave you ripping your hair out in great chunks.

The central concept is simple. A ball is connected to a winding roadway by a pivot point. You push on the left and right sides of the screen to make the ball rotate. This enables you to avoid various spiky enemies that appear on either side of the road.

It soon gets faster and harder and more manic. It's good fun and can be quite addictive. The music is absolutely top notch, too. 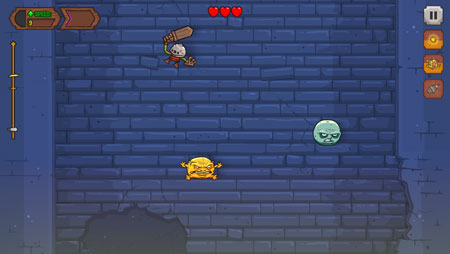 Knightmare Tower is an alarmingly well-made little endless-runner with a fresh new mechanic. You're a knight who has fired himself up a tower wall on a rickety rocket. To maintain his upward momentum, he must slam down on enemies to bounce back up.

So, the game is all about tilting left and right to line up with foes, then tapping the screen to drop down on baddies. Those enemies are always offering new challenges - one covers itself in spikes like a pufferfish, another fires gobs of green slime.

Knightmare Tower also has a habit-forming upgrade tree and gorgeous cartoon graphics. We recommended this in our first round-up of top Ouya games, but it's just as good (if not better) on mobile. 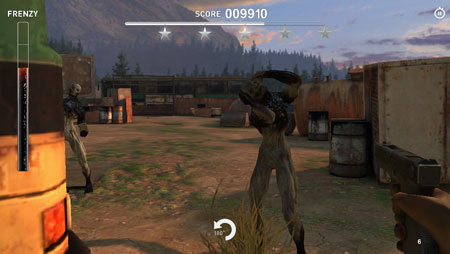 The Drowning is a "revolutionary" iOS game. Well, according to its creator, at least. Scattered Entertainment aims to re-define the way we play shooters on iOS here, you see.

So, you use a handful of familiar iOS touchscreen gestures to make progress in The Drowning. To shoot monsters, for example, you touch two fingers on the screen and the bullet travels to the middle point between those taps.

It works surprisingly well, and lets you murder oil-slick monsters with some speed and accuracy. But it doesn't fix the fundamental problem of shooters on touchscreens: you still can't move and shoot simultaneously.

It's also packed to the eyeballs with free-to-play bobbins, including wait timers, an energy system, and all that fun stuff. If this is revolutionary, I think I'll stick to the past. 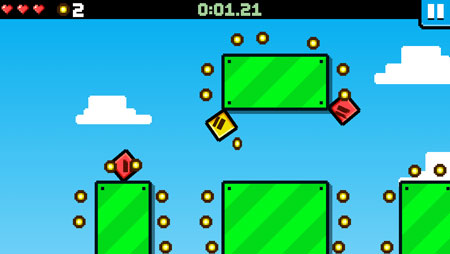 Brick Roll is a cute little platformer with a strong hint of Pac-Man. You are a bright yellow brick that rolls around the edges of these floating platforms. Your two inputs are change direction and leap between nearby platforms.

Your job is to gobble down dots and avoid enemies. But if you eat a special pellet, you'll experience a few moments of invulnerability and gain the ability to murder all those bad guys. Sound familiar?

It's cute and charming, with chunky pixel-art graphics and a happy little soundtrack. Good clean fun for your cash. 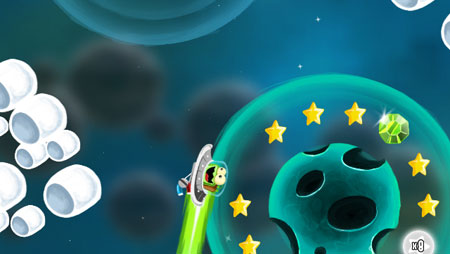 In An Alien with a Magnet, you are an alien... with a magnet. And you'll use that magnet to latch onto tiny planetoids as you leap from space rock to space rock, scooping up precious gems and stars.

I'm sure we've played this exact same game about a million times before, but I can't remember the name of any game like it. So, you're off the hook this time, Rejected Games!

Whatever the case, this one has extremely slick production values and lots of content. Keep an eye out for our full review of this one, I'd say. 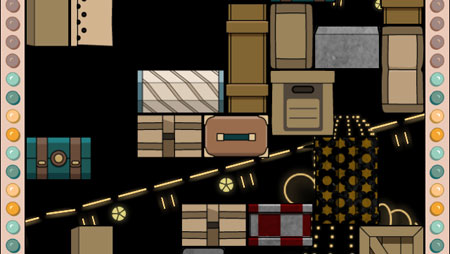 Imp Paired is one of those memory matching games. So, you flip over some parcels, try to remember the pattern on the bottom of each box, and then work to flip over pairs of patterned parcels.

I find these games terribly dull, personally. I HAVE done ever since they were bonus stages in Super Mario Bros. 3. 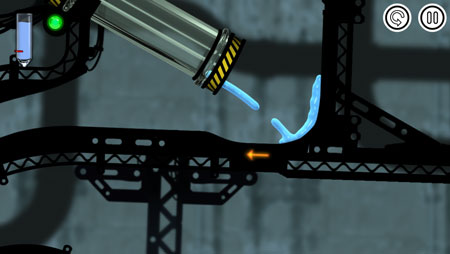 Puddle is a physics-puzzler that's available on pretty much any platform you can think of. From Xbox Live Arcade to PS Vita, it's there. Now, it's on iOS, and it feels perfectly at home.

The idea is to transport various liquids through tricky obstacle courses by tilting (or touching) your telephone. You need to solve puzzles, avoid danger, and use the unique movement of liquid to propel yourself through each level.

It's very well made, looks wonderful, and boasts lots of good ideas. If you've never tried this one before, picking it up on iPhone or iPad now would be a very smart move.