iOS + Android
| Neon Shadow
Updated on August 12th, 2015 at 12:43PM: Yesterday we reported that Neon Shadow had gone free but it turns out that our facts were, well, not facts at all.

Neon Shadow remains a premium app while Neon Shadow Zero is a brand new standalone app that is free and ad-supported.

We apologise profusely for this error and will flog ourselves in the bitter cold streets of Bath as punishment. 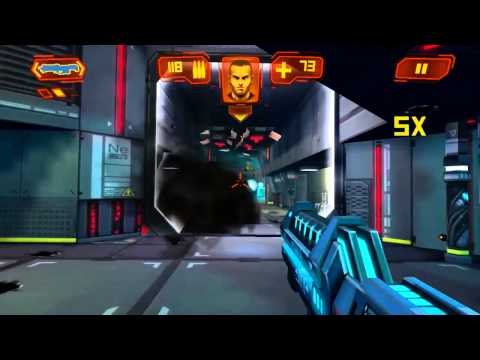 Crescent Moon's Gold Award-winning shooter, Neon Shadow, is now free on iOS in a new ad-supported version after going free on Android back in June.

Neon Shadow is a fast-paced futuristic shooter inspired by the likes of Halo and Quake in which you have to rescue humanity from mechanoids who have taken over a space station and have designs of doing the same to the entire galaxy.

You can blast apart these mechanoids in single player or take the fight to your friends in online, LAN, or split-screen multiplayer on a single iPad.

At review, we were quite taken with Neon Shadow. We gave it a Gold Award and said nice things like "A hugely entertaining shooter that works brilliantly on touchscreen, Neon Shadow is a must-buy for anyone who likes a blast".

If you like a blast, head on over to the App Store [download] or Google Play [download] to grab Neon Shadow for absolutely nothing right now.

Opinion: It's time to give up on first and third person shooters for mobile

Genre Moves: How smartphone and tablet gaming has changed the FPS

Out at midnight: Shoot crazy robots until they explode in Neon Shadow for iPad and iPhone