If you play Mikey Shorts as a straight-up platformer, it's very likely that you'll come away unimpressed.

The game is ridiculously easy (in fact, it's impossible to die until you hit the last couple of worlds), and you could count all of its ideas on one hand. It feels a bit 'My First Platformer', and it looks like it too.

At face value, then, this is simply an unambitious little game about dawdling from one end of the level to the other, lazily dodging robots, smashing up statues, and collecting coins.

But that's only half the story. Play that level again and try to meet the speedrun deadline needed to get a three-star award. Or a placement on the Game Center leaderboards.

Now it's a game about precision jumps and perfectly timed slides under barriers. It's about predicting the movements of pendulum platforms and having the reflexes to dodge a nuisance bot who wanders into your path.

Suddenly, Mikey Shorts is transformed into a game of parkour elegance, as pint-sized Mikey seems to float through the level in one single movement, bouncing from platform to platform and then sliding under barriers the exact nanosecond his feet touch the ground. It's like poetry in motion.

And there's you, controlling it all. You're gripped by white-knuckle tension as one slip-up, one mis-timed jump, or one unforeseen element can shatter your plans and put your dreams of Game Center fame on ice.

Thankfully, the controls do their job impeccably. You feel like you have complete control over Mikey's movements, and fluffed jumps feel like the fault of your reflexes, rather than the touchscreen buttons. You can also edit the controls, if you wish.

It's not all about speed, of course. There are hidden tokens (a golden pair of shorts, naturally) to hunt down, and coins to collect. Those let you buy amusing disguises and hats from the in-game shop. There are also achievements for finding all this junk.

But Mikey Shorts's thrills always come from mastering the game's controls and simple mechanics, to ace those three-star speedruns, or beat the aptly named Challenge mode.

This is a game about dedication, patience, training, and sliding along on your knees like a six-year-old on a sugar rush who's just spied freshly polished linoleum. 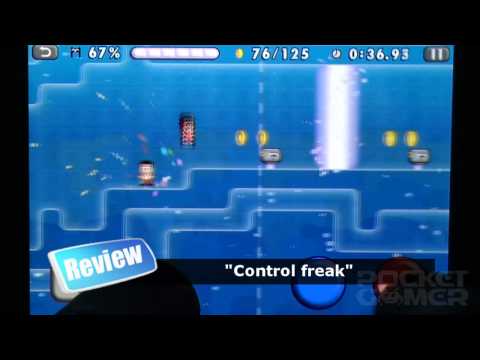 Mikey Shorts is a speedrun platformer that's all about learning levels and nailing jumps with expert precision. If you prefer to take it slow, though, Mikey's unimaginative design will fail to thrill
Next Up :
Evony: The King's Return review