True Axis has finally confirmed the release date for its long-awaited sequel to the Silver Award-winning Jet Car Stunts. So, the imaginatively titled Jet Car Stunts 2 will be out on January 2nd.

In this follow-up game, you'll drive a super-powered vehicle around a track made up of separate floating platforms, leaping between them and performing stunts.

There will be different modes to master, including one where you'll be pitted against other cars for the first time.

You'll be able to download a chunk of the game for nothing, by the way. You know, just to get a feel for how this gorgeous-looking gap-leaping game works.

In that initial download, you'll get a mix bag of ten levels and the level editor from the game (albeit with some of the features turned off). If you like what you see, then you'll be able to splash some cash to bag the rest. 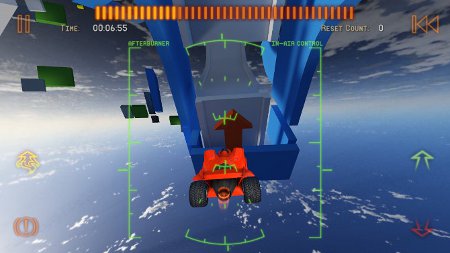 For £2.99 / $4.99, then, you'll get the whole kit and kaboodle of platforming, time trial, freestyle, and racing levels. That's 120 levels (with three different difficulty settings) and a bunch of different cars to use on them.

Jet Car Stunts 2 will be compatible with those newfangled MFi controllers. The game will also boast leaderboards, replays, and a whole host of other features.

Jet Car Stunts 2 will accelerate onto the App Store on January 2nd. To keep you going until then, check out the collection of Jet Car Stunts 2 screenshots in the gallery at the top of this page.