The stealth game tends to be about adapting on the fly, a balance between tense observation and precisely-timed execution. Turn-based strategy is, by its nature, patient and cautious, giving the player as much time as they need to plan and consider every possibility.

The two styles of gameplay seems almost incompatible - how can stealth remaining tense and satisfying if there's no threat of discovery or urgency - and yet Klei's Invisible, Inc. blends the two in a confident cyberpunk roguelike hybrid with ease.

The set-up is simple: your titular corporate espionage agency is attacked by a rival, leaving its leader, a few agents, and surveillance system Incognita on the run. You only have 72 hours to prepare for and execute a desperate decisive counterattack against your enemy's headquarters.

That narrative is the foundation from which Invisible Inc crafts its impressive blend of turn-based tactics and high-tech stealth. From your aerial base, you outfit and upgrade agents to tackle one of several available missions, each taking place in facilities controlled by various corporations. Each megacorporation features its own unique challenges, from the robotic drones of Sankaku to K&O Security's heavily-armed guards. 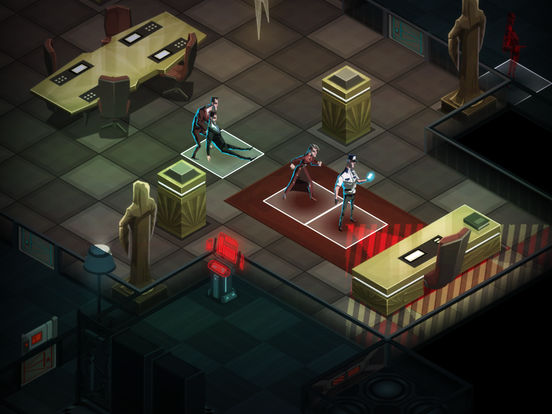 To handle those diverse threats and security measures, your agents can be customized with a wide range of items and augmentations, alongside their individual specialties: area-of-effect stuns, cloaking, remote hacking, shock mines, and much more.

But even with the most enhanced agents, your infiltrations will fail without strategy. Knowledge is your greatest advantage in Invisible Inc.; you can see the line of sight of every guard and camera, a guard's patrol route, which tiles can be seen or are hidden, how much noise sprinting or takedown will produce. Using the Incognita system, you can hack into security camera to see into other rooms.

This means that stealth in Invisible Inc. is a matter of planning. You must consider all the information available, weigh the effectiveness of your skills and action points with where you want to move, if knocking out a guard is better than sneaking by unseen, and then act with precision. A well-executed mission is always a satisfying juggling act of multiple agents, hiding from guards, decoys and distractions, and thinking several turns ahead. 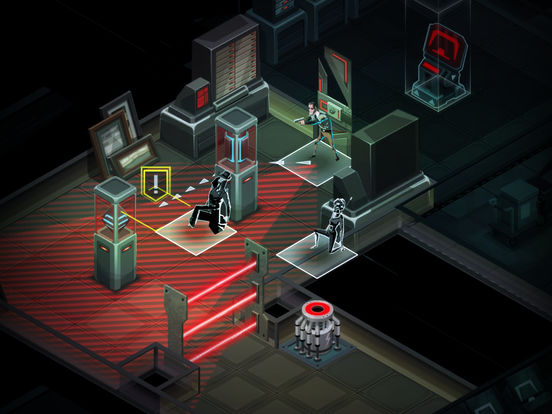 However, while the game is turn-based and you can take your time to plan and assess, Invisible Inc's sneaking is not without urgency. Every turn you take raises the facility's alarm; each alarm level adds a new complication, such as more guards or increasing the security level of cameras and computers.

This ever-looming threat is what lifts Invisible Inc from great stealth game to thrilling test of tactical espionage. Suddenly, every action you take must be measured and planned to be as effective and efficient as possible. A wasted turn only serves to make your mission harder. 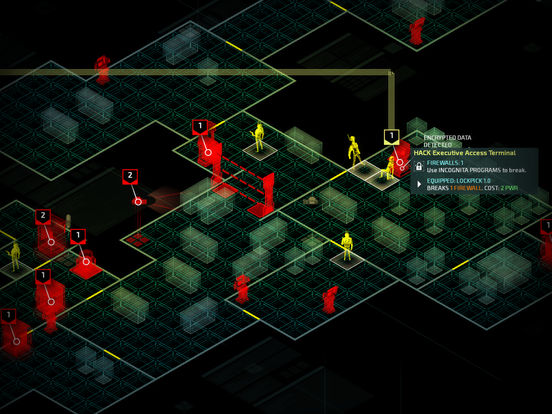 You will fail during the start of your strategic spying. Your agents will be cornered and killed, you'll struggle to learn the best builds and find your favorite agents and upgrades. Invisible Inc has the structure of a roguelike, with procedurally generated missions, so this rate of death and failure in early playthroughs can feel like a frustrating learning curve.

But stick with the game's turn-based stealth and you'll see that each failure and lost agent is a lesson, honing your skills to tackle even the hardest difficulties and endless challenge modes in Invisible Inc.

Klei's hybrid of cyberpunk sneaking and turn-based tactics is a must-play for fans of the stealth genre
Next Up :
Otaku's Adventure mobile review - "A truly bizarre love triangle"