Hundreds is a game of two halves. On the one side it's a uniquely stylish experiment, fuelled by cryptic cyphers and designed to entice you into its almost entirely monochromatic world.

Flashes of red tell you when you've gone wrong, with cheeky rhymes hammering home your failure.

The other half of the game, which you might call the game itself, is far less successful. Simple mechanics and surprisingly uninteresting level design make for an experience that's never exciting enough to get your blood really pumping.

It's a shame, because there's so much here that you'll want to like, but the one-note gameplay never fosters any of the feelings of anger or frustration that lead to addiction.

Hold your breath and count to a hundred

As the title suggests, the game is all about nice round hundreds. Each level presents you with a series of circles with a zero inside them. It's up to you to fill these up until the numbers inside add up to one hundred. Complete that task and you can move onto the next level.

You fill up the circles by pressing on them, the twist being that if a circle touches anything else on the level while you're cramming numbers inside it you'll die, and have to start the level over again.

The first few levels introduce you to the basic mechanics, and every so often the game throws a new obstacle at you. Spinning spiked cogs will pop your circles and drain their numbers, for example, whereas bubbles get in the way but can be popped if you tap on them.

The game plods along at a swift but uninspiring pace. Being caught out on a level never feels particularly annoying because they're so brief that it's not going to take up too much of your time to go to the beginning and start again.

The strange messages that flash up from time to time try to add mystery to the proceedings, but in the end you can't help but feel like they're there to pad out an experience that's never as exciting as everyone involved, including you, wants it to be.

Hundreds is a solid game, and there are moments when it manages to squeeze some tension from its simple core, but considering the incredible talent involved you can't help but feel underwhelmed by the package as a whole. 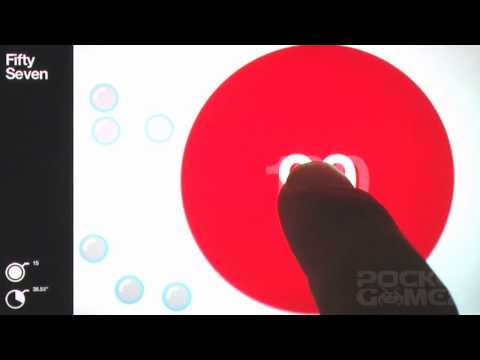 There's an interesting idea here, but Hundreds just isn't inspiring enough for you to want to stick around to find it
Next Up :
Valiant Hearts: Coming Home Netflix review: "A touching war story from various angles"

Gaming by numbers: The making of Hundreds