At first glance, Human: Fall Flat isn't the most impressive thing, but underneath a seemingly plain design is a decent puzzler with some hard-to-master mechanics.

It's a story told in chapters condensed enough to keep your attention, though it still manages to fall flat (yes I said it) in a few crucial areas that makes its Switch port less enjoyable.

If you've ever seen a toddler in the early stages of walking - you know, when they're up on two feet but they're not totally stable on them - you'll have a good idea what to expect here.

Human: Fall Flat's primary mechanic is in its tricky, physics-based gameplay. It picks its humour from that age-old gag of watching someone fall over, and applies it to a scenario where you're both the audience witnessing such an event and the victim it's happening to. 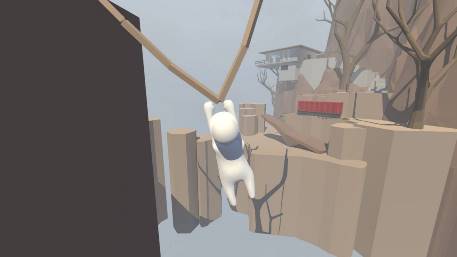 That's pretty cool but it's also a bit weird, and it ends up making you feel determined, excited, and supremely frustrated when it doesn't go your way. Hence, the toddler reference.

After a brief tutorial level, you're given the task of solving seemingly basic puzzles like pressing buttons, weighing down pads, breaking windows, and climbing up ledges.

With 'day-old calf' legs you wobble your way uncertainly through each level until you reach the destined goal. ZL and ZR control your arms, which auto-grab whatever they come in contact with, and after that it's all about mastering pulling yourself up onto things.

This all sounds very simple on paper, but that's the charm of the game. Like trying to perform menial tasks with your non-dominant hand, it's much harder to control than you'd think.

Ever tried to get your house key in the door after one fruity cocktail too many? Case and point.

Each of the chapters offers up a new, trickier sort of challenge, and each area has a secret or two to discover. Once the game assumes you've gotten used to the drunken controls, it offers up more complex puzzles which can, in some cases, be solved in different ways.

While the Switch version does have local, split-screen, cooperative play, it isn't the easiest thing to configure. Rather than picking up a Joy-Con each you have to re-calibrate your controls in the Switch's menu and it is a little less fluid than, say, Mario Kart 8 Deluxe. 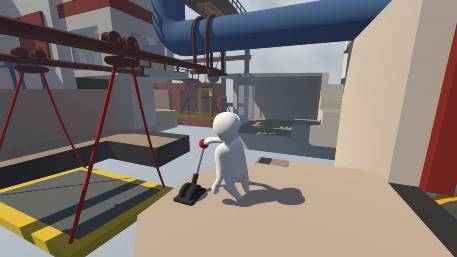 Once you're in though it's easily the best way to play the game, difficulties included. Since you and your partner are now missing two analogue sticks, you have to look around using motion controls and interact by pressing the SR and SL buttons.

It takes a little while to get used to the setup, though it's a lot of fun once you get going. It doesn't detract from the game's original repetition but it makes it more interesting.

That is, until one of you has a unavoidable fit about how tricky it is to work the camera at times.

Human: Fall Flat isn't the best Switch port on the market and it does begin to grind after a while. It can also feel a little empty visually and frustrating until you get used to the controls.

Though, whether you're playing on your own or together with a friend, there's a lot to do and plenty to figure out. It's an experience short-lived, but it's a fun one at the very least and not bad for the asking price.

Human: Fall Flat is a wobbly and aggravating physics-based game that, despite its shortcomings, is still a bucket-load of fun
Next Up :
Roller Drama review: "Scheme with your team, skate great"