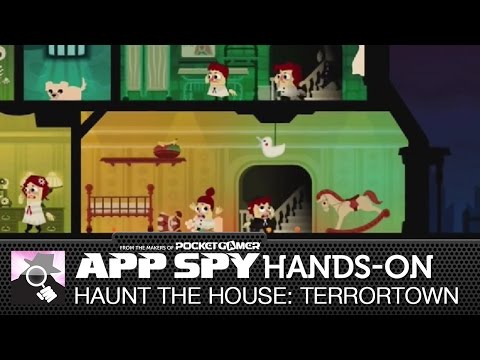 At EGX 2014, Detective Grimoire developer SFB Games revealed that one of its earlier games, Haunt the House: Terrortown, will be coming to iOS and Android later this year.

If you missed it on PlayStation Mobile (we don't blame you), the game is about clearing out an entire cartoon house by scaring away all of its inhabitants.

As you're an invisible ghost, you do this by hopping into objects and then making them move to creep people out.

You'll slam doors, rattle bones, make lights flicker, and cause plant pots to topple off shelves. And as the mood inside the house ramps up, you'll be able to perform more terrifying actions with each item.

There's a sort of sandbox puzzle aspect to the game, where you jump from room to room, figuring out ways to send people towards the exit. 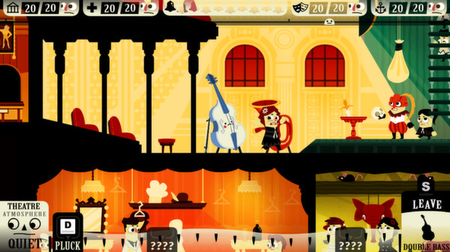 In play, it can be a little finicky and actually herding people out of the house - rather than setting them running off in a blind panic - is hard. You might intend to scare someone out of the door, but they actually dart up a staircase and into another room.

There are other characters - like a clown and a nurse - that don't scare so easily. For them, you need to figure out exactly which item you must posses to spook them away. It's not rocket science, and you can get by with simply trying everything in the vicinity.

So as an actual puzzle game, Haunt the House: Terrortown might not be the most tricky or intuitive game. But there's more to it than just finishing your objective.

It's all about the beautiful cartoon artwork, the massive cross-section buildings, and the funny little animations that play out when you posses each item. You'll want to see what every single item does. 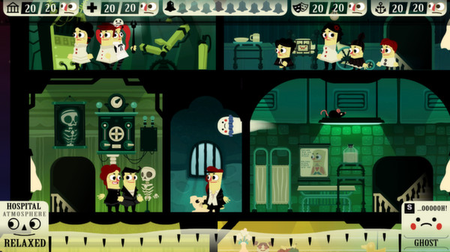 The game works nicely on iPad as you simply need to double tap on the object you want to posses, and then flick buttons at the bottom to perform different actions. And when you're in your spectral form you can move around by dragging a pinky across the screen.

Right now it's designed for iPad and Android tablets, but SFB's Tom Vian (programmer to his artist brother Adam) says he will try to come up with an appropriate iPhone interface. The pair hope to have the game on the App Store for Halloween.

Haunt the House: Terrortown update lets you become the terror of Christmas shoppers