Xiaomi's stature in the world of smartphones grows with each new release, and the Chinese firm - so often referred to as "The Apple of the East" due to its enviable position in that particular market - sent out a powerful message by choosing to unveil its new Mi5 handset at this year's MWC in Spain.

The company's phones are intended for sale in its homeland and parts of India, and while Xiaomi has hinted at a global release, it hasn't happened yet.

If you're interested in the Mi5 then you'll have to import the phone from resellers online, but is it really worth the effort when we already have so many amazing phones available to us here in the UK? Read on to find out. 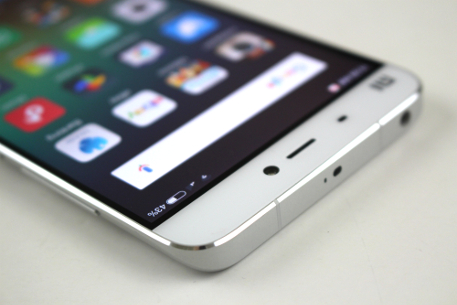 Xiaomi has a reputation for ripping off Apple when it comes to design - the Mi4 looked a lot like the iPhone 5, for example. A quick glance at the Mi5 might lead less kind individuals to point the finger yet again, this time with Samsung as the offended party.

However, while the Mi5 does indeed share the same rounded back as the Galaxy S7, here the Chinese firm has no case to answer; the Xiaomi Redmi Note 3 had a rounded rear panel and that pre-dates Samsung's device by a full month.

Elsewhere, the phone shares some common themes with the Mi4. A band of metal runs around the edge of the phone, festooned with the usual crop of buttons, grilles and sockets. USB Type-C is in - Xiaomi used it on its Mi4c last year - and on the front you'll find a thin home button which also acts as a super-fast fingerprint scanner.

The Mi5 has a simple and elegant design, and while it lacks the wow factor of the Galaxy S7 it still manages to outshine many of its 2016 Android rivals. It's thin and surprisingly lightweight, and despite the 5.15-inch screen doesn't feel too large in the hand. This is a premium offering, without a doubt. 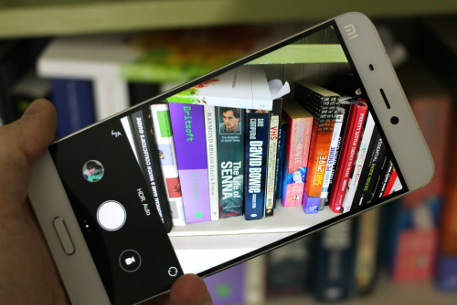 The UI on the Mi5 is unlike any you'll have seen on any other non-Xiaomi Android phone. The Chinese firm customizes Google's OS with one of the most drastic interfaces on the market, totally stripping away Google functionality by default and removing the app drawer to present a more iOS-style experience, along with its own Mi Store full of apps and other downloads.

However, despite the differences the software is based on Android 6.0, and benefits from the improvements Google has baked into that version.

While MIUI looks a lot like Apple's iOS, it does come with some features which are unique, even in the Android sector.

For example, the OS allows you to randomise your lockscreen wallpaper so you get a different image every 15 minutes. You can also apply a theme to the phone's UI from a store packed with options - while this is something that other manufacturers offer, the sheer volume of themes available for MIUI is staggering.

Granted, many of them are whimsical efforts featuring poorly-translated English phrases and half-naked images of Chinese girls, but others are genuinely cool and even boast lock screen animations to liven things up.

While it's great to see such extreme customization and variety in the Android sector, there are some issues with Xiaomi's drastic changes. The way application permissions is handled could be much better, for example.

While Android 6.0 recently introduced granular permissions on other handsets, Xiaomi has been doing this kind of thing for a while - just not quite as well. 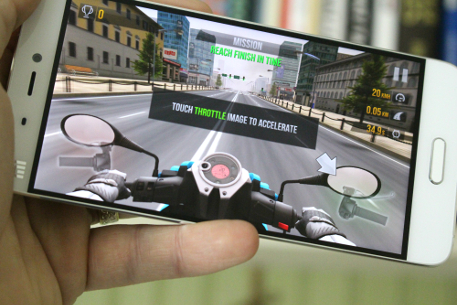 Often you'll find that apps fail to work properly because they don't have the right permission enabled, and MIUI sometimes fails to prompt you when an app is requesting access - which means you have to manually find the app, locate the permission, and switch it on.

There are also issues with the way MIUI interacts with apps. For example, with Twitter you can only share content to the last-used Android application, while on any other Android device you are given the full list of apps which can be shared to.

Given that the Twitter app is exactly the same in both cases, there are clearly some bugs in MIUI which need squashing. On the plus side, Xiaomi pushes out updates on a weekly basis, and so these problems rarely stick around for very long.

Xiaomi previously decided that NFC wasn't needed in its phones because hardly anyone used it, but that situation is set to change with the widespread introduction of contactless mobile payments.

The company has wisely included NFC in the Mi5, and combined with the fingerprint scanner this means you'll be able to use the handset to pay for stuff in shops - when Android Pay launches, at least.

The version of the Mi5 we reviewed comes with 32GB of storage but larger capacities are available, at an additional cost, of course. There's no MicroSD card slot, so you can't add to that total later on. 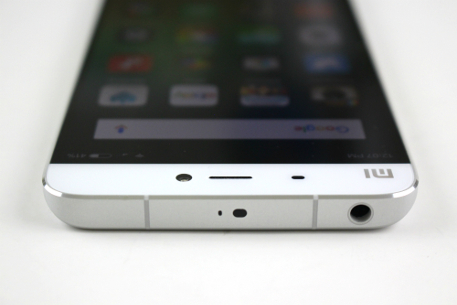 Xiaomi has bucked the recent trend for pixel-rich quad HD screens by giving the Mi5 a 1080p display. While this might seem like a negative, it's actually a massive positive - because there are less pixels to push, performance is generally better, as the CPU has less work to do.

Besides, it's practically impossible to spot individual pixels on this screen anyway, so any extra would be wasted.As for the quality of the panel, Xiaomi hasn't spared any expense here. The IPS screen is incredibly bright and boasts superb contrast and colour replication.

In fact, it's one of the best displays we've seen on a phone in some time - almost as punchy as the Super AMOLED panel seen on the Galaxy S7, but with arguably better representation of colour. At 5.15-inches it's also the ideal size, and is protected by Gorilla Glass 4 to prevent unwanted scratches and marks.

Audio through the 3.5mm headphone socket is decent, with a good degree of bass. The mono speaker on the bottom edge of the device is loud enough to be heard in a busy environment, but there's quite a bit of distortion at high volume. In-call performance is good, with the other caller coming through clearly. 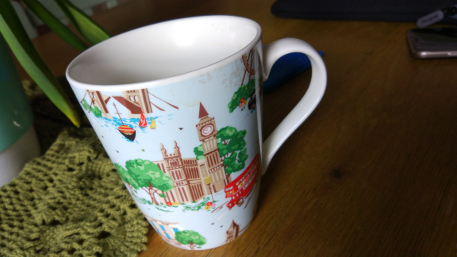 With Qualcomm's Snapdragon 820 running the show and 3GB of RAM keeping things ticking over, it should come as no surprise to learn that the Mi5 is a powerhouse of gaming performance.

The aforementioned 1080p screen helps as well, as it places less strain on the CPU. Everything we threw at the device ran flawlessly, from intense 3D titles like Real Racing 3 and Asphalt Nitro to more sedate affairs. The 820 is quite simply one of the best mobile chipsets available, and it's incredible to think that it can be found in a handset which costs less than £300.

Outside of games, performance is equally smooth. While the Mi5's 3GB of RAM is less than that found in the Galaxy S7 and LG G5, it never seems to matter - switching between apps is quick and you never have to endure any pauses or skipping, even when the phone is performing several tasks at once.

MIUI arguably provides a better ride than "stock" Android anyway, but with this kind of power, the experience is a smooth as silk. 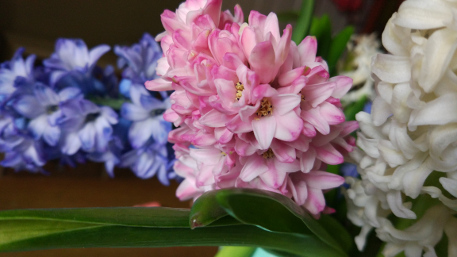 The Mi5's 16 megapixel camera is perhaps the only part of the package that has the potential to disappoint.

It's not that it's not decent - it takes detailed snaps and boots quickly - it's just that when compared to the super-swift snapper seen on the Galaxy S7 and the unique wide-angle option on the LG G5, the Mi5's camera lacks a bit of punch.

Samsung's offering has incredibly fast focus and produces some of the best photos ever seen on a mobile phone, and in contrast Xiaomi's effort doesn't quite match the same level of performance. However, it's worth pointing out that the Galaxy S7 costs almost twice as much, and in that regard, there's little reason to grumble.

As with all phones imported from China, it pays to do a bit of research before ordering a Mi5. While 3G connectivity is fine, the device doesn't support certain 4G bands in the UK and Europe. We tested it with a GiffGaff SIM (which means we're using O2's masts) and were unable to get a 4G signal, but if you're on 3 or EE, it apparently works fine.

Elsewhere, quick-charging makes the cut, and allows you to top up the 3000 mAh battery in around an hour. The battery is more than capable of getting you through an entire day, as well. 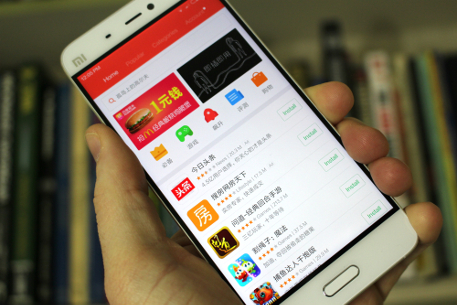 On paper, the Mi5 should be the best Android phone money can buy. It's offering a cutting-edge processor, a great screen, above-average camera and mod-cons such as NFC and a fingerprint scanner - all powered by a version of Android 6.0 wrapped up in one of the most appealing custom UIs on the market.

However, because the phone was never intended for use in the UK, there are caveats to consider. Depending on which network you're using, you might not get a 4G signal, and getting Google apps and Google Play access on the phone can sometimes be a chore.

You may also find that resellers flash the phone with unofficial ROMs that introduce Chinese bloatware - thankfully the unit we reviewed didn't, but depending on the store you use, it's a bit of a lottery.

MIUI still needs some work as well and has a few annoying idiosyncrasies and bugs, but the same could be said of any Android OS - and weekly updates mitigate this problem somewhat.

These grumbles aside, the Mi5 is a truly amazing phone. For £270 you're getting a handset which is more than capable of competing with the best the Android sector has to offer at this moment in time.

It's running the same chipset as devices which cost almost twice as much, and delivers the kind of blistering performance that simply shouldn't exist in this price band. It's also incredibly good-looking, with an appealingly svelte design which incorporates premium materials such as tempered glass and brushed metal.

Throw in NFC, a fingerprint scanner, USB Type-C, and Quick Charging and you've got one hell of a package - sure, there's no MicroSD slot, but that's the only thing that's really missed.

Xiaomi's decision to show off the Mi5 at MWC could be perceived as a sign of things to come - the firm has always maintained that it will expand outside of the Far East when the time is right, and with the Mi5, it surely has a phone which is capable of gobbling up market share from the likes of LG, Sony and even Samsung - assuming it can launch around the same price as the handset is currently available for on import.

If you're gagging for the latest tech but don't want to shell out £500 or more - and you don't mind going the extra mile to get your phone up and running - then the Mi5 simply has no equal at this moment in time. For £270, it's astonishingly good value for money.

Thanks to eGlobal Central UK for supplying the Xiaomi Mi5 used in this review.

Boasting a gorgeous design, appealing software and a raft of cutting-edge features, the Xiaomi Mi5 is a true powerhouse - and at £270, it comes highly recommended
Next Up :
Alien: Isolation review - "Chestbursting fun in the palm of your hand"