The SteelSeries Stratus is small. Tiny. Practically microscopic. At 11cm wide it isn't much longer than a credit card and is shorter than an iPhone.

That makes it great for carrying around, but it can feel cramped when you're actually using it. You feel like a harrowing case of RSI is just over the horizon as your crab-like hands curl up over the tiny buttons.

It's not uncomfortable, mind, and you can clamp the protective plastic case to the back of the controller to make it a bit more chunky in your hand. But your thumbs often butt against each other when you're twiddling both analogue sticks.

I thought it was worth pointing that out first because, aside from the tiny size (and wince-inducing price), the Stratus is an impressive controller and it's now the gold standard for these Apple-certified pads.

You got me pushing imaginary buttons

The controller has got all the sticks and buttons on Apple's "Extended controller" blueprint: that's two analogue sticks, four face buttons, a D-pad, a 'pause' button, and four shoulder buttons.

The analogue sticks are really quite nice. They're proud (even more so than the sticks on the PS Vita), have a lot of space to travel, and are responsive with little or no dead zone in the centre.

Playing first-person zombie blaster Dead Trigger 2 is almost effortless, and you can make tiny nudges for nuanced aiming or big shoves to spin around and shoot the undead nasties creeping up behind you. 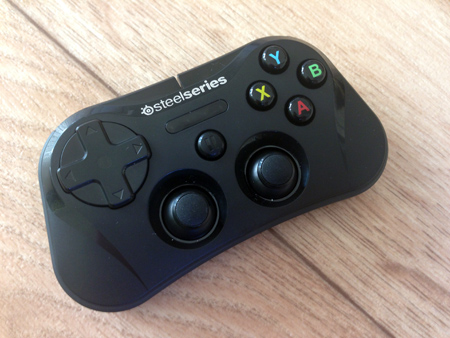 They feel especially competent when compared to the dodgy circle pads on the MOGA Ace Power controller - we said playing a shooter on that thing left you feeling "hampered and hamstrung".

The pressure-sensitive buttons are fine (and completely reliable, unlike the MOGA's); the D-pad is pretty good; and the shoulder buttons are easy to get at, even if they are a bit clumped together.

All in all, it feels great to play any type of game on this: platformers like Limbo, 3D games like GTA: San Andreas, top-down games like Trouserheart and Ice Rage, and anything else besides.

The Stratus is the first wireless controller in the Apple-certified range, which means you can use this thing with an iPad, as well as an iPhone or iPod touch.

Connecting to your device is pretty easy. You hit the 'sync' button on the back and then tap on the controller's name in the Bluetooth settings on your device.

Once paired, the controller and iOS device will remember each other and the pad will automatically sync the next time you switch on the Stratus.

The Stratus has a physical power switch, so you can shut it down and save battery. It lasts about ten hours according to the manufacturer - that's more than enough, and no worse than any iOS device you'll pair it with, but not as good as the MOGA. 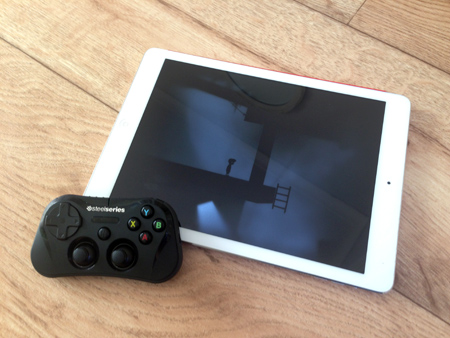 The only issues with the Bluetooth are that you can't be connected to two devices at once (so you'll need to reset the controller's pairing if you intend to switch to a different phone) and it doesn't really like multitasking.

The controller will sometimes refuse to work if you switch between controller-enabled games, and you'll have to kill apps and switch the controller off and on again to get it to work.

However, this seems more like a software bug than hardware and could be ironed out as developers get their hands on wireless controllers.

The SteelSeries Stratus is the first iOS controller that I can actually recommend. It's got a great set of controls, works on both iPhone and iPad, sports a lengthy battery life, and fits snugly in your pocket.

So if you have normal-sized hands, and don't mind letting go of $100 (about £70), the Stratus is well worth buying. Just make sure you have an iPhone 5 and up, fifth generation iPod touch, iPad 4 or better, or an iPad mini.

With its responsive controls, top analogue sticks, and iPad compatability, the tiny SteelSeries Stratus is the new gold standard for iOS controllers
Next Up :
Warhammer 40,000: Tacticus review - "An approachable strategy to a grimdark future"