The craze for smartphone-compatible controllers shows no signs of flagging, and iOS 7's recent support for such interfaces has only increased the level of interest.

However, Android leads the way in this regard. Bluetooth pads of all shapes and sizes have been able to connect with Google's OS for quite a while, and the PhoneJoy is the latest member of this ever-growing club.

Kickstarted last year to the tune of $70,000, PhoneJoy is an evolution of the creator's previous effort: a crude clone of the Sony PlayStation pad which we happily admits was something of a hack-job.

This sequel is the real deal - it's a bespoke controller which has been designed from the ground up to be the best option for Android players, boasting a spring-loaded mechanism which supports phones (and tablets, if played in portrait) of up to six inches in size.

It has two analogue sliders, a digital pad, an array of buttons, and an internal battery which can be charged via Micro USB, giving around eight hours of play time. 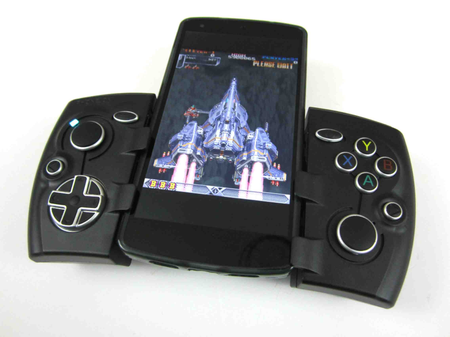 The pad connects via a Bluetooth connection, and although there's an official PhoneJoy application on the Google Play store which points you in the direction of compatible software, there's no requirement to download it.

Pairing your pad with your Android device is a breeze, and the majority of games we tested worked instantly - and those that did present issues usually required us to simply toggle the "mode" switch to obtain the desired configuration.

The sliders operate a lot like the ones on the Nintendo 3DS, offering precise and smooth control. The controller is comfortable to use and the physical buttons are responsive, but the digital pad is something of a disappointment - it's set too low down to be used comfortably for prolonged periods, and feels too squashy for accurate movement. 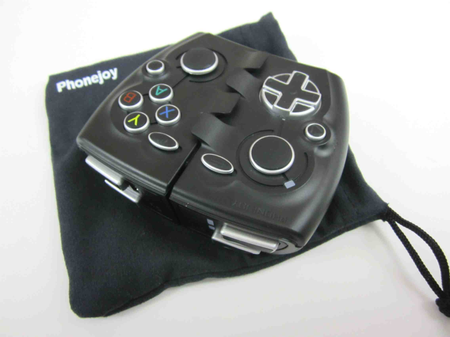 This aside, overall build quality is generally excellent, although when expanded to its maximum size the pad can feel a little flimsy. Once you insert your phone - which is held in place and protected by rubber bumpers inside the PhoneJoy itself - the combined unit becomes a little more sturdy

It's not the most attractive arrangement, and in terms of size it can easily dwarf a PS Vita or 3DS XL, if bonded to a phone with a screen size of five inches or more.

Still, the advantage here is that you can collapse the pad down when it's not in use, and it even comes bundled with a pouch for storage. You'll also find bundled adapters that connect to your phone and allow you to listen via the stereo jack or charge during use, since with most phones both of these ports are covered when the PhoneJoy is attached. 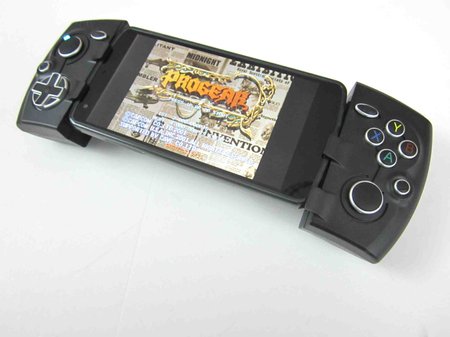 Of course, with the connection being a wireless one, you can also use the PhoneJoy as a standard, detached Bluetooth pad. It will pair with any Android device - including tablets and micro-consoles, like the Ouya - and in its compressed form is surprisingly comfortable to use.

If you find that it's a little too compact for your liking, you can always prop it open with a suitably-sized object.

Bolting the PhoneJoy to a tablet is also possible, as long as it's a slate with a screen of around seven to eight inches, and is used solely in portrait mode. It's an unwieldy beast in this state, but such concerns are swiftly dismissed when you find a game which supports such an arrangement - vertically-scrolling arcade shooters look especially fetching, for example. 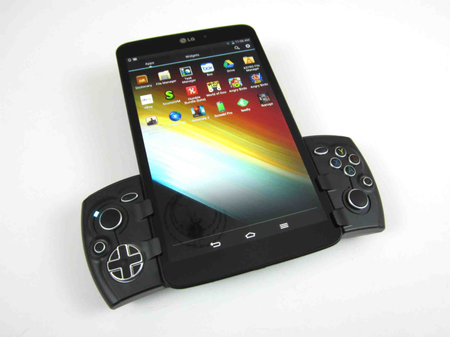 PhoneJoy doesn't do anything especially new when compared to previous Android Bluetooth pads, but the impressive design, large number of buttons, and dedicated Android application make for a compelling purchase if you're serious about physical controls on your smartphone.

If you've held back making an investment in an Android controller, then the PhoneJoy is one of the best options out there right now
Next Up :
Hundred Days review - "A success for the management genre"