Back in 2011, Sony Ericsson tried to kickstart a mobile gaming revolution with the Xperia Play, a handset with slide-out gaming controls which sought to tap into the ready-made PlayStation market.

The phone had its fans, but it wasn't as commercially successful as Sony Ericsson hoped, and no successor was forthcoming.

Fast-forward to the present day and Android gaming is set to explode thanks to an influx of fresh and focused hardware - but the approaches taken by rival manufacturers are slightly different.

Devices like Ouya and MOJO are pushing Google's mobile OS into the living room, but Nvidia - famous for its top-of-the-line graphics cards and mobile chipsets - has seemingly come out of nowhere with its Shield handheld.

A super-powerful but incredibly bulky system, it uses Android as its operating system but lacks cellular connectivity, giving it a tighter focus than the Xperia Play.

This is a gaming system first and foremost, complete with dedicated physical controls, quad-core Tegra 4 chipset and - most impressively - the ability to stream cutting-edge PC games from your computer. 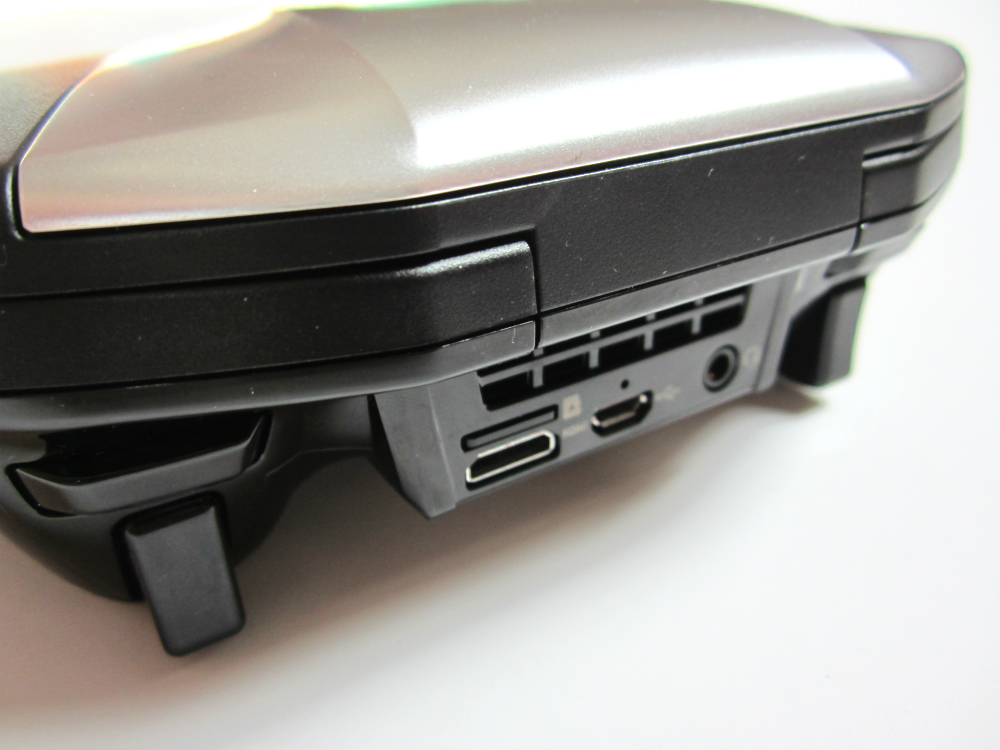 With the Xperia Play, Sony Ericsson at least tried to make its gaming-centric phone pocket-sized. Nvidia has no such pretentions of mobility - the Shield is a massive slab of plastic which opens to reveal a 5-inch 720p HD touchscreen display and a raft of sticks and buttons.

It's like someone has strapped a smartphone to an Xbox 360 controller, and feels just as large and heavy as you would expect.

The Shield's size may prevent it from being as portable as consoles like the 3DS and PS Vita, and that 5-inch screen looks a little small when compared to the vastness of the bodywork, but what it lacks in slenderness it more than makes up for in comfort.

Such a large expanse of plastic means there's plenty to grab onto, and the ergonomic design reduces the danger of hand-cramp. The bottom of the device also has a rubber-touch texture which further improves grip.

It's obvious that a lot of time has been spent making sure that the Shield's physical controls are as good as possible - the Xbox 360 layout feels familiar, but the designers have included better buttons, a superior D-pad and twin analogue sticks which offer an impressive degree of control.

The shoulder buttons and triggers round off what is an excellent interface package - quite possibly the best control arrangement ever incorporated into a handheld games console. 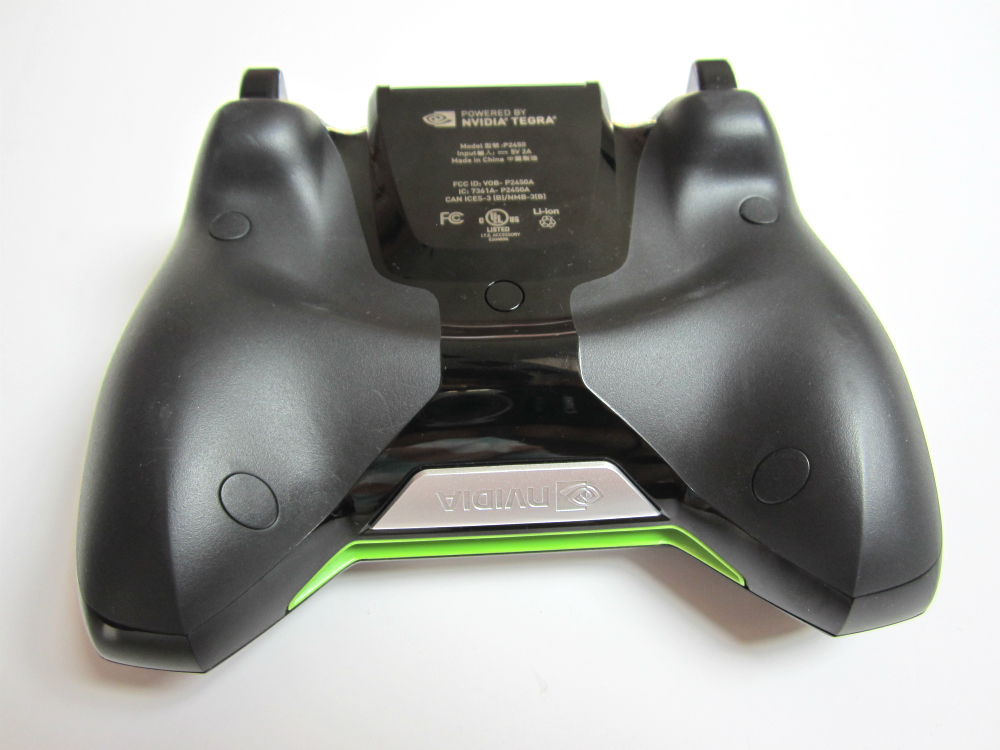 When Nvidia revealed the Shield console, it was arguably its specifications that got people talking more than its design. Sporting the new Tegra 4 chipset, the console is at the bleeding edge of mobile tech.

Nvidia's new chip has four cores and runs at 1.9GHz, with a fifth companion core for low-level tasks. The chipset also includes a custom-made GeForce graphics processor with a whopping 72 cores.

Unsurprisingly, this makes the Shield a seriously powerful piece of kit - all of the 3D games we threw at it ran incredibly fast.

However, it's not all plain sailing - some titles clearly aren't optimised to take advantage of the Shield's incredible power, such as the recently-released Asphalt 8: Airborne, which suffers from frame-rate issues. Such is the nature of a fragmented market, with so many different hardware configurations - but at least titles which are coded with Tegra in mind run smoothly.

2GB of RAM helps things to tick along nicely and there's 16GB of memory is included for storage, as well as a MicroSD card slot. There's also an HDMI-out port, allowing you to connect the device to your television - an interesting bonus which effectively renders consoles like Ouya and MOJO redundant. 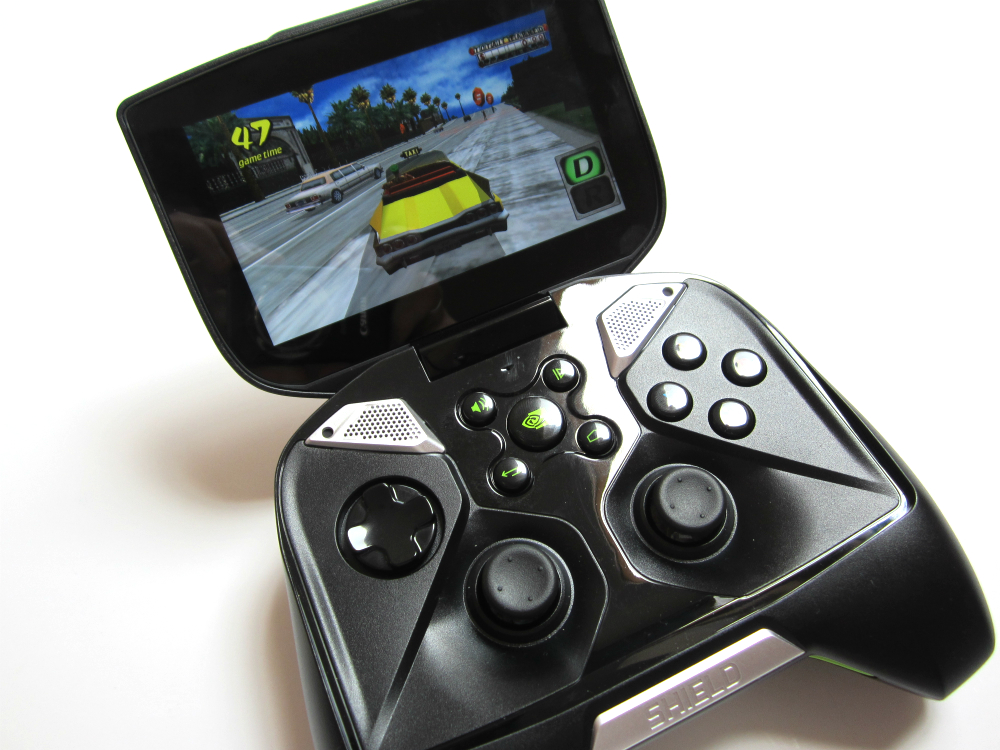 While gaming is part of all Android devices, it's given special attention on the Shield. The console's robust physical gaming interface leaves you in no doubt as to why this product is on the market, and with that in mind it's initially a little disappointing that software is so thin on the ground.

Unlike rival consoles - such as Ouya - the Shield has unrestricted access to the Google Play store. That means you can download games you've already purchased without having to "double-dip" - one of the key criticisms of Ouya, which has its own dedicated digital store.

However, this is almost a double-edged sword - the Google Play market isn't totally aimed at the Shield, and as a result many games will install perfectly fine but won't make use of those lovely gaming controls.

Slowly but surely developers are updating their games to support Nvidia's console - Sega's Crazy Taxi was recently enhanced in such a manner, Super Hexagon works perfectly, and Jet Set Radio is on the verge of getting an update - but at the moment the pickings are slim.

Nvidia's Tegra Zone store - which is accessed by pressing the massive, glowing Tegra button in the middle of the device - attempts to remedy things by offering a selection of games that take advantage of the hardware's physical controls, but selecting a game just drops you back onto the Google Play market.

As the selection of games grows then Nvidia's storefront will become more useful, but at the moment there are only a handful of games on display - many of which you'll probably have already experienced on your Android phone or tablet.

Of course, with the Shield being powered by Android you can also dip a toe into the murky waters of emulation. Using Retroarch - which has come on leaps and bounds since we reviewed it a few months back - you can play SNES, Mega Drive, Game Boy, NES, PlayStation, Game Boy Advance and arcade titles at full speed with sound, and the app even automatically maps all of the buttons to suit the Shield's control arrangement.

With Retroarch installed, the Shield becomes a portable gaming museum, able to host the finest games the industry has produced in the past 30-odd years. Android emulation has long been a shaky affair, with few devices capable of attaining full-speed play without the use of frameskip, but the Shield has just about nailed it.

Nvidia has taken advantage of its position as a leading PC graphics card manufacturer by including the ability to stream games from your computer to the console's screen - an act not entirely dissimilar to what the Nintendo Wii U GamePad achieves.

Provided you've got a game that supports the feature - as well as a compatible graphics card - the process is a breeze. You simply tap the Tegra button, scroll across to the relevant menu section, and pair the Shield with your PC. The comfort of being able to play leading PC games anywhere in the house is counterbalanced by the occasionally fuzzy visuals, but it's a neat bonus all the same. 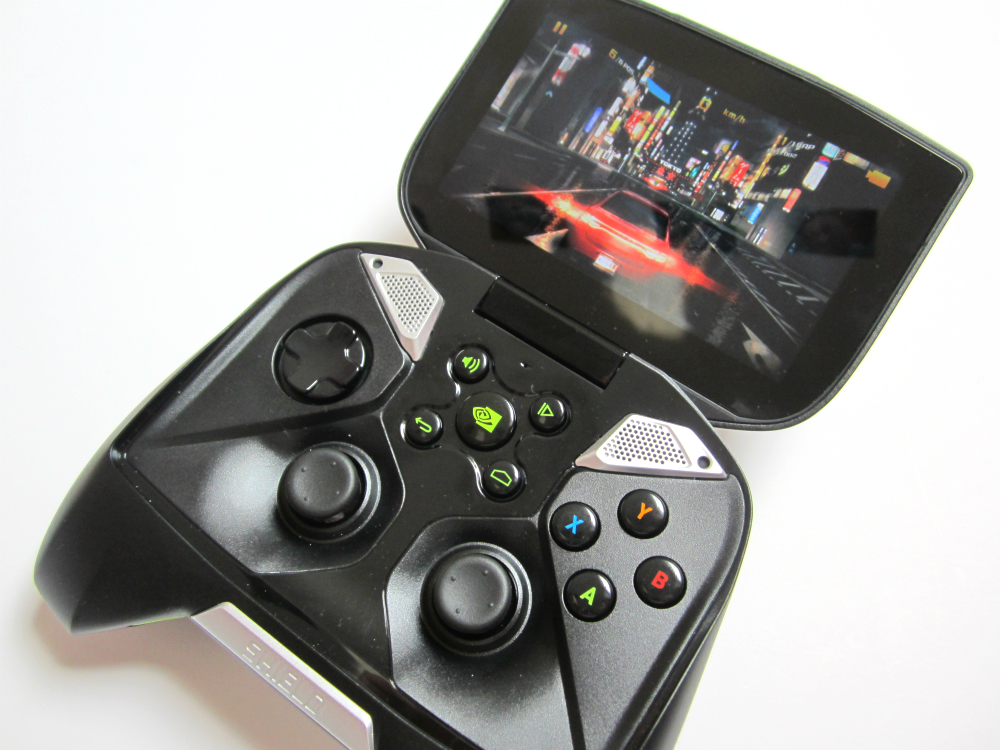 The Shield could be described as the ideal mobile gaming device. Its bulk makes it much larger than rivals such as the PS Vita and Nintendo 3DS, but in terms of ergonomics and interface it has no equal - the controls are superb, bettering even the popular 360 pad, which is widely considered to be the finest controller in existence. Build quality is likewise excellent, giving an impression of dependability and sturdiness.

Because you have connectivity with the Google Play market you can access previously purchased content without having to sideload applications.

The Shield isn't really ideal for games of Angry Birds or browsing the web, but it's nice at least have the option. By not restricting the Shield to a closed store - as Ouya has done - Nvidia has ensured that when you're not playing Shield-enabled games you can at least entertain yourself with traditional touchscreen titles.

The other massive selling point is the pure power that's on tap here - the Tegra 4 chipset blows away rival tech and lends the Shield incredible graphical muscle. At the moment there aren't all that many games which show off this talent, but as Tegra-optimised games appear - such as the gorgeous-looking Dead Trigger 2 - then it will become a more impressive prospect.

Aside from the size of the device - which, as we've already touched upon, is possible to live with when you consider the excellent controls - the other big issue is a lack of dedicated software.

Most of the Shield's most enjoyable titles are merely existing Android games with controller support added - these games are improved immeasurably by the inclusion of physical controls, but it's hard to argue that they justify the investment in order to play.

The price is certainly an issue. Given the Shield's strong focus on games and the aforementioned lack of killer exclusives, it's hard to compare this with other handheld systems such as the Vita and 3DS - both of which have a healthy selection of platform exclusives. 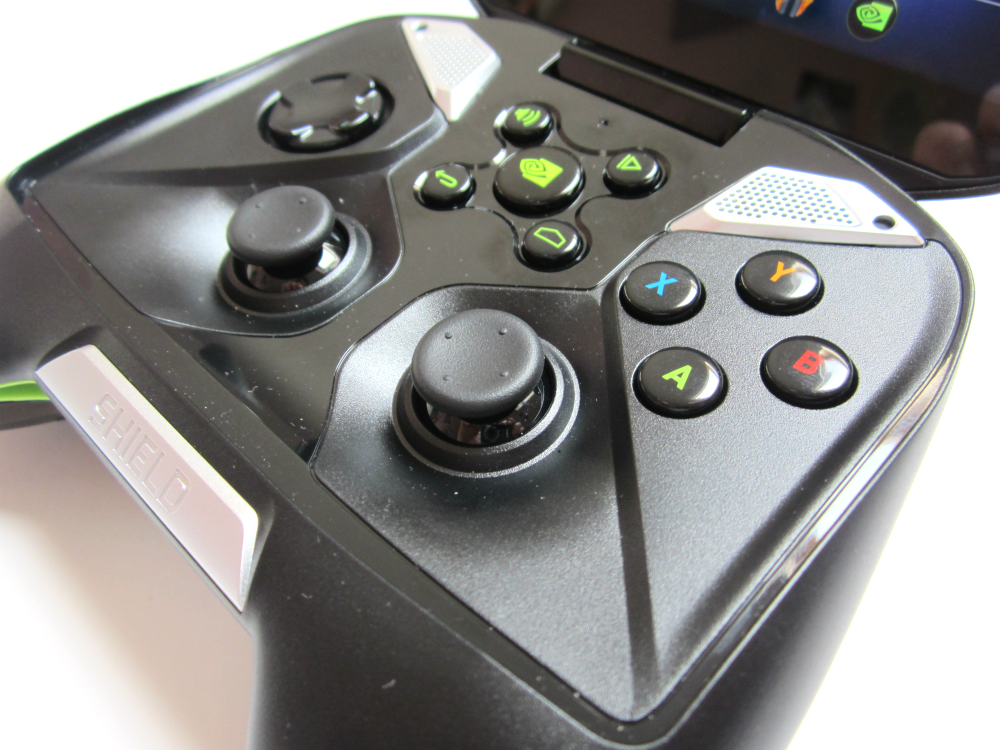 The fact that the Shield exists is testament to the vibrant nature of the Android hardware arena - it's fantastic that manufacturers feel brave enough to take such risks with their tech.

Whether or not a market exists for the console is another matter entirely. This is a niche product which is catering for a very small sector of Android fandom.

While it offers the best way to experience many of the best Android games, the crippling lack of exclusive content gives potential customers little reason to invest - many will fail to see the point in spending around £200 on a device which allows them to play Dead Trigger or Crazy Taxi with proper buttons when they've already aced both games - and many others - on their tablets or phones.

It's a shame that the Shield is left in such a quandary, because if you're the right kind of player then it could potentially be your number one gaming device.

The aforementioned Retroarch turns the console into the perfect vintage gaming handheld - unlike the Xperia Play, which offered reasonable emulation performance, the Shield's raw power means it can replicate consoles such as the SNES and Mega Drive flawlessly.

Of course, emulation carries with it certain caveats - the shady world of ROM distribution is still a touchy topic for many seasoned gamers.

It's probable the future Tegra titles will take advantage of the console's controls, but there's no getting away from the fact that the current stock is meagre.

The ability to stream PC games to the system is a welcome bonus, but of course it requires you to already have the appropriate hardware and software to take advantage of it.

If you happen to belong to the small contingent of gamers not deterred by any these existential problems, you may just get your money's worth out of the Shield.

At the time of writing the Shield is only available in North America but Nvidia is planning on showing the console at various UK gaming events this year, which is a good indication that it's going to hit our shores soon.

The Shield is a formidable chunk of gaming hardware that takes Android gaming to the next level, but the lack of notable exclusives means that seasoned players may ignore it in favour of established - but less powerful - alternatives
Next Up :
Bound By Blades review: "Animal kids against evil!"