Let’s face it: the Xperia X10 – which is notable for being Sony Ericsson’s Android debut – didn’t exactly get pulses racing when it hit the market a while back. The phone had the looks to impress but under the bonnet it was slightly less appealing, failing to surpass more accomplished rivals such as the Nexus One and Motorola Droid.

Sony Ericsson is clearly taking such criticism on the chin, because the firm has launched several new handsets in the Xperia line, the most intriguing of which is unquestionably the X10 Mini. As the moniker suggests, this is intended to be a cute and cuddly variant of the full-fat X10, but in reality the two stablemates are very different beasts. 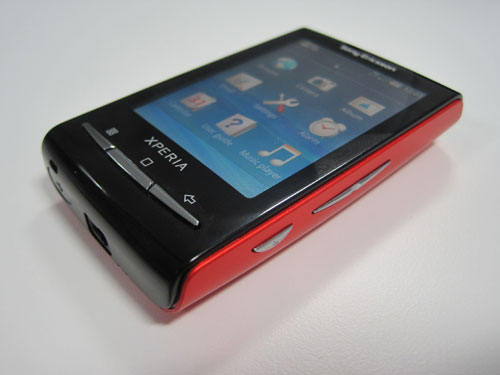 Time for a swift exit

Although Sony Ericsson’s much-hyped Timescape software makes a reappearance – and is just as underwhelming on a smaller screen, if we’re being honest – the rest of the X10 Mini’s operating system is radically different to the one sported by its bigger brother.

This is largely due to the size of the phone: the tiny 2.55-inch screen requires a highly specialised interface and for this Sony Ericsson has cooked up several custom modifications to Google’s mobile OS.

The fact that shortcuts are pinned to the four corners of the screen is brilliant, allowing you to quickly and easily access vital functions without having to plough through menus. These can even be customised to suit your personal preference.

However, elsewhere the X10 Mini’s interface forces you to jump through more hoops than is really necessary. For example, on most Android devices you can access the settings menu by clicking the menu button on the home screen. On the X10 Mini you have to enter the phone’s App Drawer and scroll through until you find the settings icon instead. It’s a minor problem but one that will infuriate Android veterans. 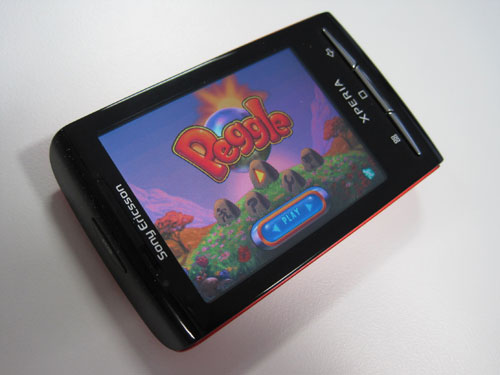 Your number is up

With such a small screen, a full QWERTY keyboard was never going to be a realistic option and Sony Ericsson has wisely employed a more traditional numeric pad, inspired by the ones seen on phones before the touchscreen revolution took hold. Equipped with T9 predictive text this is actually a fairly comfortable compromise.

Another concession is the scaling-back of Android’s famous widgets. The X10 Mini is capable of running them but you can only have one per home screen. Again, this is understandable given the lack of screen real estate to play with, but it feels incredibly limiting if you’ve dabbled with Android previously - it’s almost as if the X10 Mini is a training platform for the newcomers to the OS.

Despite the minuscule display we found that pretty much every Android application we downloaded from the Market ran perfectly fine, albeit in a very low resolution. The X10 Mini even came with a few exclusive treats, boasting its own version of PopCap’s maddeningly addictive Peggle – a title not currently available on the Android Market.

In the cold light of day, it’s clear that the X10 Mini isn’t intended to be a cutting-edge Android device, despite the Sony Ericsson’s lofty opinion of the phone.

It’s lumbered with Android 1.6, the dedicated OS cuts corners, and the low resolution of the display makes it hard to view websites and the like. Frugal types may also wish to note that the phone boasts a non-replaceable battery, so once it goes kaput the device is essentially useless. 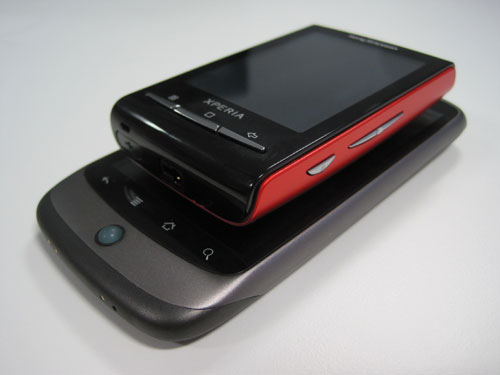 Putting these issues aside for a moment, it’s easy to be impressed by the X10 Mini’s tiny form factor. It’s such a dinky device that it wins you over regardless of its shortcomings and compared to recent Android front-runners like the monstrous EVO 4G the difference in dimensions is striking – you could slip the X10 Mini into your pocket almost without noticing, which isn’t something that can be said of HTC’s bulky challenger.

Ultimately, the X10 Mini is more likely to appeal to the female sector of the market - as the wide selection of colourful alternative battery covers bundled with the phone suggests. However, Android-loving geeks will most find the restrictive nature of the phone annoying and are better off going for one of HTC’s recent releases.

The world’s smallest Android phone cuts more corners than Dick Dastardly but it provides just enough functionality to be seen as a worthwhile purchase – so long as you’re not hell-bent on exploiting all that Google’s mobile OS has to offer
Next Up :
PUBG New State review - "Not-so-new state, but still enjoyable nonetheless"